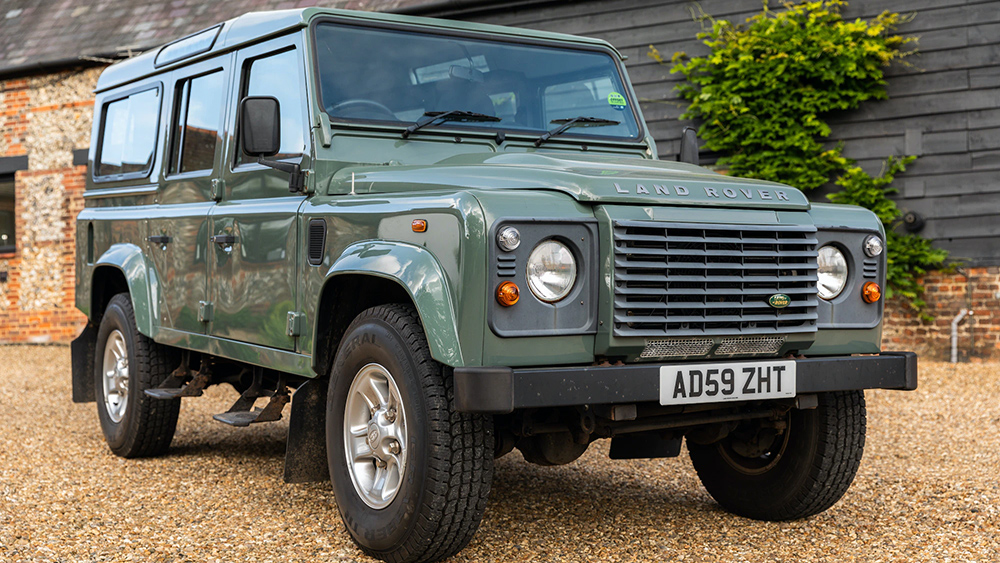 The late Prince Philip’s love for Land Rovers ran deep. His Royal Highness even designed a custom Defender 130 Gun Bus for his own funeral. Now, a Defender 110 County first driven by the Duke of Edinburgh is heading to auction.

The iconic British SUV, which is live on Collecting Cars until June 17, rolled off the line in 2010 before it was delivered to the palace for Prince Philip’s use. The four-wheeler then moved onto its current owner and has been with them for the past 11 years, according to the auction house.

Fresh from a recent service carried out in May, the meticulously maintained Defender sports just 15,451 miles on the dial. The boxy body, which is coated in Keswick Green paint, shows no damage save for a few small scuff marks and a minor chip on the front windscreen. It sits on a set of 16-inch Boost alloys shod in General Grabber TR tires.

The Defender is powered by a 2.4-liter turbocharged inline-four diesel engine good for 121 hp.  Collecting Cars

Moving inside, the original cloth-trimmed cabin is finished in elegant dark gray. As seat protectors have been fitted throughout the past decade, the interior remains in top-notch condition. Fit for a prince, you can also expect electric front windows, heated front seats, heated windscreens and A/C.

Under the hood, meanwhile, the 2.4-liter turbocharged inline-four diesel engine is good for 121 horses and 265 ft lbs of twist. Power is sent to all four wheels through a 6-speed manual transmission.

“This smart and well-maintained Defender is sure to take pride of place in any collection of iconic British vehicles, and needs nothing to be pressed into service as a reliable, versatile and thoroughly accomplished daily driver or off-road companion,” Collecting Cars writes on the listing.

The ride is presented with its owner’s book and relevant paperwork, along with a spare wheel, two keys and an audio adapter with DAB and Bluetooth. According to the auction house, there’s also correspondence on file from Jaguar Land Rover’s director of royal and diplomatic affairs proving its royal family provenance.

You could be in for a royally good bargain, too. With just three days left on the sale, the Defender has attracted three bids and is sitting at $24,200 (£20,000) at the time of this writing.