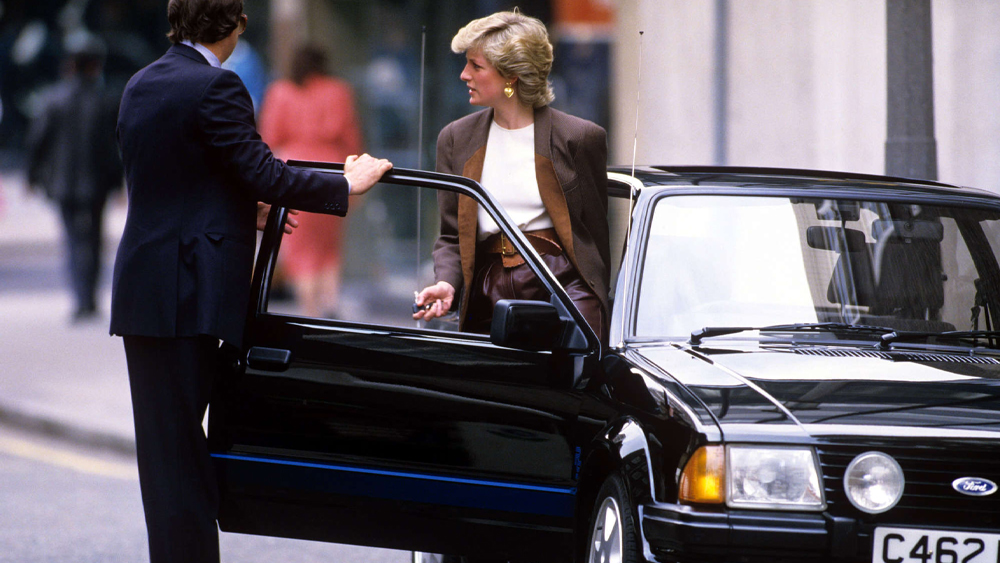 A princess gets what a princess wants—unless the royalty in question is a young Diana, Princess of Wales circa the mid-’80s, who used to love driving a bright red Ford Escort 1.6i Cabriolet. The small-engined ragtop may have been a humbler alternative to the royal family’s typical Rovers and Rolls-Royces, but the SO14 Royalty Protection Command believed the attention-grabbing alfresco configuration was too exposed for her public role. When they suggested something a bit more discreet, she came up with a clever workaround: a Ford Escort RS Turbo S1.

The seemingly workaday two-door was, in fact, a hot-rodded Mark 3 Escort with a turbocharger and various go-fast bits that helped extract 132 horsepower from the 4-cylinder. As such, it was the fastest variant in Escort history. Ford had decreed that you could have the zippy RS Turbo S1 in any color as long as it was white, but for these purposes, the Blue Oval’s PR team urged the Special Vehicle Engineering department to go full Rolling Stones for Diana, and paint it black. While the hopped-up model incorporated a more aggressive suspension setup with adjustable Koni dampers and rally-style fog lamps, the team toned it down with a more low-key five-slat front grille instead of the sportier-looking three-slat setup.

Three RS Turbo S1s in total were finished in black from the factory: Princess Diana’s, another identical model used as a decoy and a third, which was supplied to an undisclosed member of the royal family. Di’s special Escort was outfitted with a secondary rear mirror for the passenger seat, where her protection officer sat. Within the glovebox was a radio, keeping them in close contact with central command. Once prepped for royal duty, the Escort was registered for road use on August 23, 1985.

Diana loved her little black Escort, and was photographed prolifically with it around the restaurants and boutiques of Kensington and Chelsea. One shot captured a blissful moment: a smiling Diana driving with the future King, H.R.H. Prince William, sat in the back. The would-be future Queen piloting such an accessible car drew references to the People’s Princess driving the People’s Sports Car, not unlike the image of the Pope manning a tiny hatchback.

Diana got good use out of her black right-hand drive, manual-transmission steed, accumulating some 6,800 miles before it was returned to Ford Motor Company in May of 1988. After trading hands several times and being awarded in a radio station promotional giveaway, the little black Ford landed in one of the most notable collections of Ford RSs in the world. The requisite paper trail of ex-Royal cars followed, including documentation noting that the vehicle was re-registered with its original plates: C462 FHK.

Currently showing 24,961 miles and presented in outstanding condition, the late Princess’s Ford Escort RS Turbo S1 will be auctioned at The Classic Sale at Silverstone on August 27, 2022. Though a Ford Escort Mk 3 Ghia once gifted to Diana by Prince Charles sold for $63,000 (£52,000) last June, don’t be surprised if the sexier RS model commands significantly more when it crosses the auction block later this month.