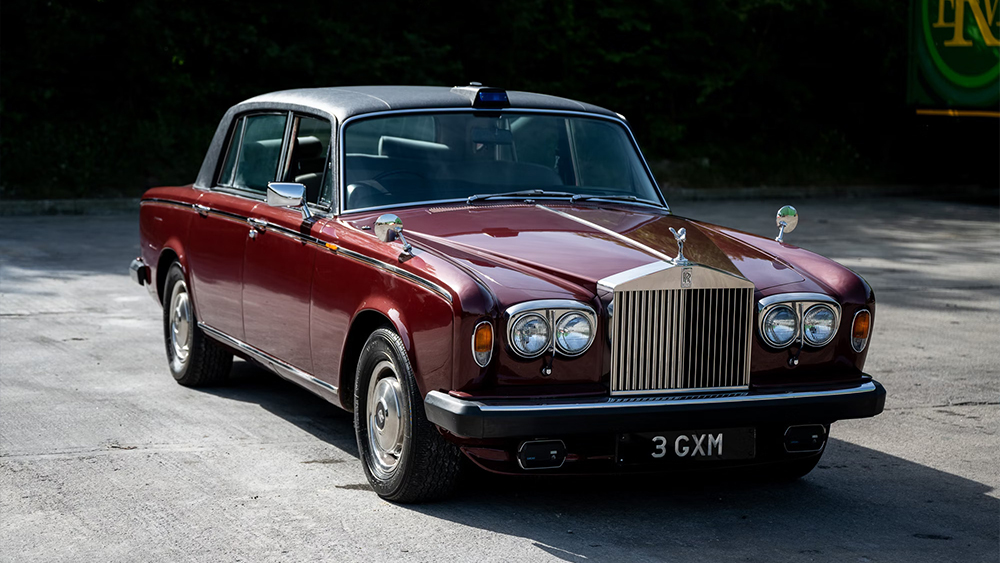 A uniquely royal Rolls-Royce is on the auction block.

The marque’s bid for a broader audience came with the familiar Silver Shadow, a stately sedan produced between 1965 and 1980 that became the most commercially successful Rolls in history.

If ubiquity doesn’t sound like a formula fit for royalty, consider the exceptional case of Princess Margaret’s Rolls-Royce Silver Wraith II, a stretch version of the standard issue Silver Shadow. Delivered in 1980, this example was equipped a cast metal coat of arms, a Union Flag and pole and a blue light atop the roof to indicate when a reigning monarch was onboard. The exterior features a lustrous but discreet Cardinal Red Metallic finish, and an oh-so-period-correct Everflex roof.

But even more unusual was the interior spec, which featured pale green cloth seats complemented by a matte rosewood dashboard. The cow-free perches are offset by deep-pile, deep-green carpets, furthering the counterintuitive package that zagged against the typically posh glossy burl veneers and sumptuous hides.

Princess Margaret clearly enjoyed riding in the Silver Wraith II, as she used it for 22 years—longer than any other motor vehicle. It even carried her children to her funeral service at Windsor Castle in 2002.

Collecting Cars is presenting this well-preserved nugget of four-wheeled royal history from Geoffrey Thomas, a private seller in Northamptonshire, UK who says he paid “over £80,000” some “six or more years ago,” or around $118,000 today. The auction description claims a “vast quantity of paperwork” and “a multitude of photographs,” including letters from her chauffeur, and missives to and from the late princess’s son, David Armstrong-Jones, now known as the 2nd Earl of Snowdon.

With just over 47,000 miles on the clock, recent maintenance work to the tune of over £4,000 (roughly $4,900), copious service records and a fresh MOT certificate, this royal Roller should be ready for many miles of service. Incidentally, this comes on the heels of a busy week for car auctions from notable Brits, from Princess Diana’s hot-rodded Ford Escort to Margaret Thatcher’s elegant Rover P5.

Our hot take? This Wraith is a prime candidate for both The Crown obsessives and those simply seeking a differentiated alternative to the usual raft of hide-lined, glossy veneer-finished Shadows. A blue-blooded Rolls is hardly for everyone. But given its unusual spec and exceptional history, this up-for-grabs Silver Wraith II should make the highest bidder very happy indeed.