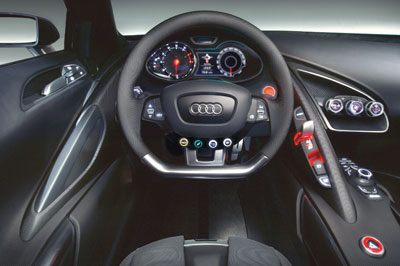 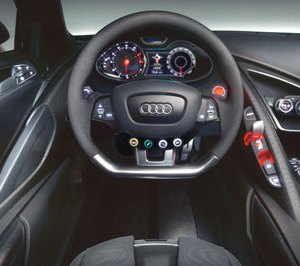 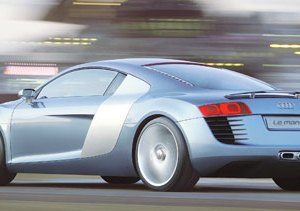 With the advent of the R10, the turbo-diesel-powered prototype that is dominating the international Le Mans circuits, Audi’s R8 racecar recently went the way of the dodo. But a sports car of the same name—based on the so-called “Le Mans Quattro” concept that debuted three years ago in Frankfurt—soon will go into production and could become available for purchase as early as mid-2007. Its price most likely will exceed $100,000, but it probably will not surpass the $175,000 cost of a Gallardo from Lamborghini (whose parent company is Audi).

Audi has been diligent about keeping its R8 supercar under wraps, letting lightly camouflaged mules out for only a few titillating test laps around the Nürburgring. Most information about the car remains intimation. A midmounted, direct-injected V-8 from the RS4 may well be the source of some 420 hp, though the moderately de-tuned version of Lamborghini’s 5.2-liter V-10 (which produces 450 hp in the S8) is another possibility. Power likely will be routed through either a 6- or 7-speed sequential gearbox, and there is rumor of a future turbo-diesel V-12 variant, though such speculation butters no parsnips.

This much is known: The R8 will be assembled by hand at Audi’s Neckarsulm factory, which recently underwent $35 million in upgrades specifically to accommodate production of this car. Neckarsulm specializes in lightweight-material technology, which will figure prominently in the new supercar. As with the concept car, the R8’s exterior body panels will be made of aluminum and carbon fiber–reinforced composites, promising a favorable power-to-weight ratio that could put the car’s zero-to-60-mph sprints in the low-four-second range.

The R8 derives its architecture from the Lamborghini Gallardo’s aluminum space frame. Like the Gallardo, the R8 will be equipped with an all-wheel-drive system that will neutralize the effects of oversteer and understeer to keep the road-going version of the R8 on track.