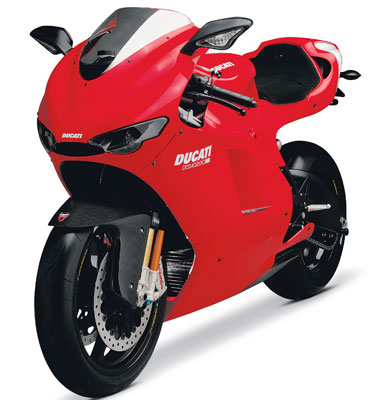 Next July, Ducati will introduce its ultimate street-legal offering: a true replica of the Desmosedici GP6 that is competing in the 2006 MotoGP World Championship. Dubbed the Desmosedici RR, the new bike benefits from the most advanced engineering, technology, and materials ever lavished on a Ducati—or likely any other—road-going motorcycle.

The heart of every Ducati is its engine, and the 989 cc unit in the RR has the marque’s classic L configuration, with two cylinders per leg, set side by side. Gear-driven, double-overhead cams operate four titanium valves per cylinder. Ducati’s trademark Desmo valvetrain design ensures precise valve closure at maximum revs through the use of an additional rocker arm and cam lobe instead of a traditional spring. Four Magneti Marelli throttle bodies perform intake duties, while an elegant four-into-two-into-one exhaust exits the tailpiece. This race-bred system, which is mated to a 6-speed transmission, produces a prodigious—and most audible—output of more than 200 hp.

Bringing this beast to a halt are a pair of Brembo radial monoblock calipers with four 34 mm pistons up front and one two-piston unit at the rear. Front discs are the same semifloating 320 mm pieces employed on the GP6. Custom Bridgestone tires cover seven-spoke Marchesini magnesium alloy wheels.

The architecture of the Desmosedici RR consists of a tubular steel trellis frame with an exceptional stiffness-to-weight ratio, as well as a forged and pressed aluminum swingarm. Chassis, swingarm, and suspension geometry and layout are the same as those of the GP6, with 43 mm upside-down Öhlins forks and a single Öhlins attached to a crankcase-hinged rocker above the swingarm. Clothing this whole affair is a delicious carbon-fiber body with two available color schemes: one painted in Rosso GP red with a white number plate on the tail, and a second, the Team Version, painted like the factory racers in Rosso GP, with a broad white stripe on the fairing.

Despite the high level of performance the RR promises to deliver, the $65,000 motorcycle—of which only 400 examples will be made—may not always be put to the test by its owners. “A percentage,” concedes Ducati North America CEO Michael Lock, “will end up as very expensive coffee tables.”