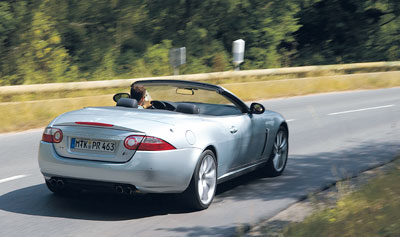 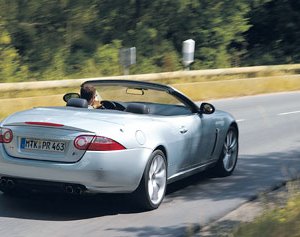 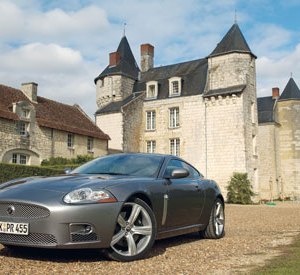 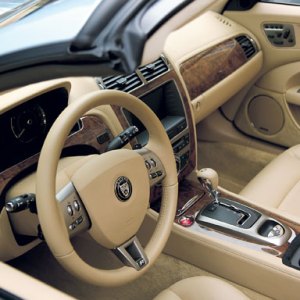 This latest two-car clique, this high-powered upgrading of a recently refreshed coupe and a gently elegant roadster, may be recorded as England’s most regal union since Victoria and Albert.

That is not to say that this summer’s warm-up acts, the 2007 Jaguar XK hardtop and ragtop, have been smudging the company’s royal warrants. But the new and mildly improved XKs brought only 300 hp to a gathering of 400 hp, sporty grand touring cars lorded over by BMW, Mercedes-Benz, Aston Martin, and Maserati. In any race, even the Cadillac XLR-V from Detroit would leave the British combatant whimpering.

Growling to the rescue will be Jaguar’s 2007 XKR coupe and convertible. Their arrival in U.S. showrooms—the coupe is due first, in December—should address any doubts drivers have about the milder XKs.

The XKRs—the R denoting the presence of mechanical growth hormones—will be supercharged to produce 420 hp, which is much closer to the number for a Ferrari than to that for a Fiat. They will have enough torque, some 413 ft lbs of it, to swallow an Orangina truck and a Peugeot 407 in a single gulp.

The XKR’s appearance will be both combative and seductive. It will include optional split-spoke wheels with a run of rivet nipples around their rims. Red and green R badges will be displayed on the rotors, tachometer, shifter, and bustle. The hood will have a pair of vents through which the engine and supercharger will breathe, and there will be gills on the port and starboard flanks, below the A pillars.

These are the cars that may ease, even halt, the crisis of a company that has not made one euro, pound, yen, or dime of profit since Ford purchased Jaguar in 1989 for $2.5 billion. Planners at Ford/Jaguar (to say nothing of investors) are agonizingly aware of what could be riding on this car: resurrection of a reputation and survival of the brand.

The roadster, which has a projected price of $92,500, will come closer to being a pure sports car than any open-topped Jaguar since the XK120 of a half century ago. Designed prior to the coupe, the convertible should have minimal cowl shake and chassis flex. A wind deflector behind the headrest will reduce buffeting to a breeze and allow driver and passenger to carry on a conversation while the car moves at speeds as fast as 100 mph. With the top up, there will be only mild swooshing from the slipstream.

The coupe, which will be priced at $86,500, will be just a little slicker and quicker than the roadster because it will be more than 100 pounds lighter. Expect a zero-to-62-mph time of 4.9 seconds, which will have it running alongside the Maserati GranSport and close to Aston Martin’s DB9, both of which cost considerably more than the Jaguar.

The XKR’s interior will be a splendid meld of today’s sophistication and yesterday’s tradition. It will include aluminum trim for those younger folk still working on their first million and burl walnut inserts for gentlemen who sleep weeknights at their clubs. In either of its configurations, the XKR would seem to slip comfortably into its role, according to Jaguar, as a symbol of a life lived easier.

The XKR could return the brand to its salad days of the 1950s, when having two Jaguars was said to be better than owning one Rolls-Royce, because a second Jag implied cash to spare for living it up.