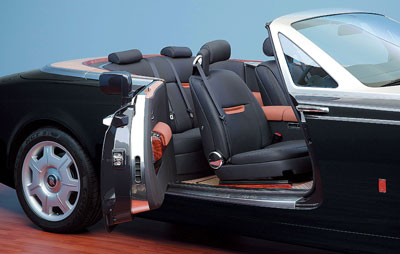 The second Rolls-Royce model line to be built at the new Goodwood, England, factory will be a slightly modified version of the 100EX Centenary Experimental Car (pictured) that was first seen at the Geneva auto show in 2004. This new Rolls-Royce, carrying a price of at least $400,000, should be available by the middle of next year.

Code-named RR02 by the folks in Goodwood, the new convertible most likely will be dubbed Corniche, making it the sixth iteration of that designation. The last Corniche, which Rolls built from 2000 through 2002—before Bentley belonged to Volkswagen and Rolls-Royce had become the property of BMW—received little acclaim, primarily because the carmaker constructed it simply by mounting a Silver Seraph’s skin onto the bones of the Bentley Azure. However, the new Corniche will be pure drophead Phantom.

The two-door cabriolet will have the same regal stature as the Phantom sedan, thanks to the aluminum-frame architecture on which it is based. It will be difficult not to recognize immediately the imposing grille—its slightly raked profile providing minimal concession to aerodynamics—as that of a Rolls-Royce. But if the chrome front does not reveal this car’s identity, then the oval LEDs set just above the high-intensity headlights will be a dead giveaway.

Although it will be a few inches shorter in length, height, and wheelbase than the Phantom, the convertible will be roughly the same width as the Phantom, providing ample seating room for four. Ingress and egress for all passengers will be through a pair of rear-hinged doors. The interior’s appearance also will be similar to the Phantom’s, with wooden surfaces and chrome-covered instrument controls. Instead of the concept car’s gargantuan 9-liter V-16 engine, the Phantom’s 6.75-liter V-12—mated to a 6-speed automatic transmission—will power the Corniche.