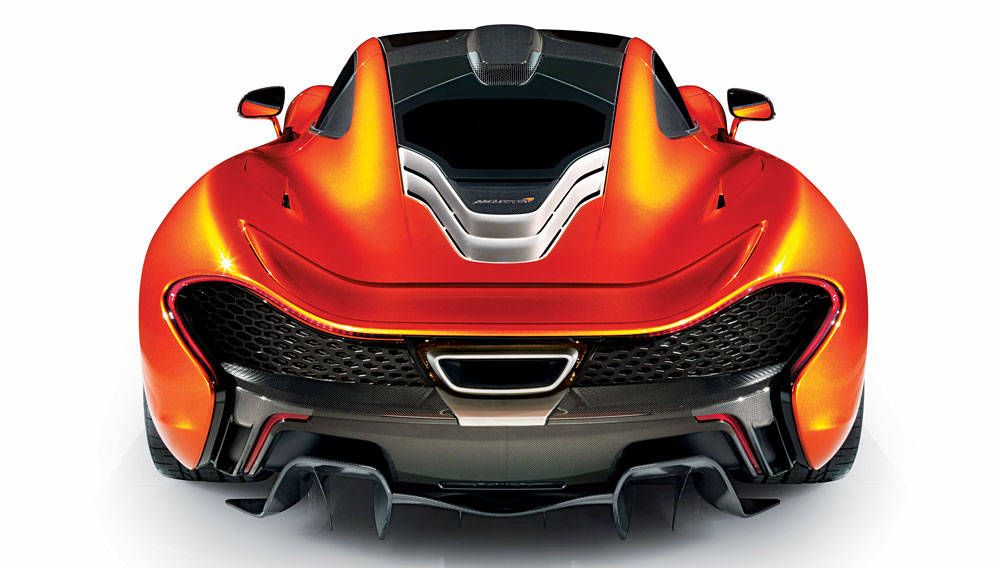 Freedom of expression was the right that enabled history’s most inspired automotive designs. Giuseppe Figoni, of the 1930s-era French coachbuilder Figoni & Falaschi, was allowed to fashion his wildest Art Deco dreams. Aerodynamicist Malcolm Sayer designed the eternal Jaguar E-Type free from the tyranny of bumper regulations. When Marcello Gandini sketched Lamborghini’s space-age Miura and, later, the Countach on cocktail napkins, he was unfettered by the rules, regulations, and other constraints that now limit the imaginations of designers.

Beginning in the late 1960s, consumer-advocate initiatives, fallout from world events, and federal and state regulations began chipping away at the type of freedom that had inspired the Motorama’s marvels, Geneva’s seductive show cars, and other styling fantasies. Ralph Nader’s frenzy was inflamed by the 1970s oil crisis, which was followed by a litany of draconian edicts issued by an alphabet of government agencies: the DOT, EPA, and CARB. Today, in the squeeze of increasingly stringent standards—from pedestrian impact to emissions to fuel efficiency—one wonders why anyone would even want to be an automotive designer.

In addition to dealing with these constraints on creativity, auto designers have to contend with development cycles—the time span from a car’s conception to production—that can be far longer than in most design fields. “What auto designers envision today must be fresh not only three to five years into the future, but also remain fresh an additional three years or so after that, when the vehicle design finally receives the common ‘new and improved face-lift’ treatment,” says McLaren Automotive design director Frank Stephenson, whose most recent project is the McLaren P1 supercar. “A designer basically has to live in the future. That’s why they are the ones considered to be living on another planet, with their heads in the clouds, always on Planet Design.

“Quite a bit of future ideation and creativity are required to pull off that objective,” says Stephenson. “Not only must designers’ search radar be on at all times, they must also be extremely hungry and highly curious regarding innovation technology, with a touch of nonconformity and a strong desire to constantly improve their work—an almost-never-satisfied type of character trait.”

Fortunately for admirers of automotive beauty, the creative urge is not easily extinguished. And while environmental and safety imperatives loom large, science and technology heretofore unimaginable have come to the aid of designers, resulting in outstanding automobiles that range from attainable sedans to price-is-no-object supercars.

At present, the McLaren P1 is the most talked-about supercar. The company unveiled it as a design study at the Paris Motor Show in September and plans to begin selling the production version by the end of 2013 for an estimated price of at least $1.1 million. (McLaren will present information about the car’s price and performance capabilities later this year.) The P1 is the spiritual successor to the once-groundbreaking F1, which is already 20 years old but still competitive with today’s young Turks. It might seem as though designers are issued a blank check when creating a car such as the P1, that they do not have to abide by any rules or limits. But Stephenson dispels that notion. “It’s a misconception that cars in the hypercar segment are free of any budget constraints or restrictions,” he says. “One must remember that this type of car is usually the company’s calling card and represents its level of expertise in developing the ultimate statement of automobile technology. The quest and expectation to innovate results in beneficial materials, features, and technology, which will cascade downwards to the other segments, resulting in better cars for more people and the environment. In the case of the McLaren P1, cutting-edge design doesn’t simply mean a new shape, but a more complete approach to design innovation that could eventually be economically adopted in series-production vehicles.”

The car’s mid-engine design is based on a monocoque architecture with a roof safety cage, which channels air into the engine through an integrated roof snorkel and ducting. McLaren calls the structure a MonoCage. It is rigid and light. McLaren further controls the car’s weight by using carbon fiber for all body panels, of which there are few. Essentially, the P1 is a three-piece body: a central MonoCage with clamshells attached at the front and rear. A pair of scissor doors and a front bonnet complete the package.

A useful tool in the development of the P1 was the McLaren wind tunnel, a gargantuan building within the McLaren development center. To put the efficacy of the P1’s aerodynamics in perspective, consider that the car—aided by flaps under the body and ahead of the front wheels, a prominent rear wing that automatically adjusts its height and pitch, and the smooth surface of the underbody—generates five times as much downforce as McLaren’s 12C, putting the P1 on a par with a Le Mans sports racer.

“[McLaren’s] heritage is in racing,” says Stephenson. “So with the P1, we started with a clean sheet and applied many design principles derived from our experience in racecar development—for example: a reduced amount of total exterior panels to improve and simplify the fit and finish quality, advanced ergonomics design to aid driver control, shrink-wrapped body-surface design to improve and control airflow and reduce vehicle weight, the overall use of advanced material technology to reduce weight for more efficient motoring, and radical glass technology to improve outward visibility. We also aggressively set design targets for the underbody to increase downforce and vehicle handling at low and high speeds. All of these design objectives apply to the world of everyday cars and will help to achieve a future of safer, more efficient, and more enjoyable automobiles.”

While such aerodynamic-led design might, in the words of McLaren chief design engineer Dan Parry-Williams, “prioritize function over pure style,” clearly collaboration between engineering and design teams is key to achieving greatness. The P1 had a tireless advocate for style in Stephenson, whose design portfolio includes the ubiquitous Mini Cooper and BMW X5, as well as the exotic Ferrari F430, Maserati MC12, and McLaren 12C. When it comes to design, Stephenson is as much a realist as a romantic. “The most important principle for design success, no matter in which segment, is the creation of what I would deem the desirability factor,” he says.

One might assume that desirability plays a more important role at the higher end of the auto spectrum, but that is not necessarily so, says Stephenson. “At the lower end, the customer has an increasingly wider choice. Today, most cars are technically excellent within their respective price segments. So the key factor is most often that nontangible element called desire, a combination of a ‘wow!’ reaction and love at first sight.

“The second important principle is purity,” Stephenson continues. “Successful automobile design starts with a harmonized suitability of the design to support the vehicle’s purpose. By this I mean honest design, which basically is the same as the expression ‘It does what it says on the label.’ This purity of design is a main ingredient of an iconic and timelessly attractive design.”

Whether from the perspective of no-holds-barred technology, performance, or aesthetics, the P1 makes an uncompromising statement. Inspired as he is by nature, technology, and an innate sense of beauty, Stephenson should be pleased with his creation, as will those fortunate few who will someday drive the car.