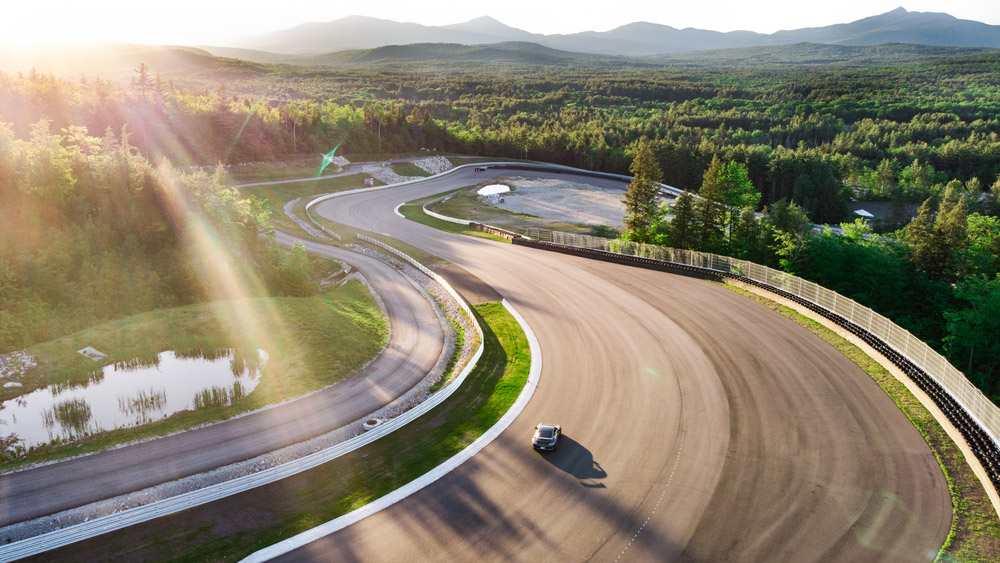 “It’s my happy place,” a private club member says. “I forget about work for a few hours and hang out with my best friends.” The private facility is in New York’s Catskills, with acres of lush grass and forested hills. High topiary walls hide it from public view. “It’s gorgeous, right?” the member adds.

Then he jams on a full-face helmet and jumps into an orange Porsche GT3 RS sports car. “Oh yeah,” he shouts. “And I get to go really, really fast.”

When you overhear friends talking about the healthy competition at their private club, the hazards on the course’s back half, or the $100,000 initiation fee, you can no longer simply assume they’re talking about golf.

A day at your very own track offers many of the same appeals as a traditional country club. You test skills against friends, and then brag about it later. Other familiar trappings include fabulous condos (built to spec, clearly), spas, good food, and post-event drinks.

But you aren’t likely to go 160 mph in a golf cart. That is an option in your own McLaren or Porsche on the back straightaway at the Monticello Motor Club (MMC), which attracts well-heeled speed lovers across the Tristate area. MMC was one of the first private tracks in the U.S., opening in 2008 right as the recession hit. For a while, the future seemed wobbly. But today our Porsche-driving friend is but one of more than 475 members who frequent the 4.1-mile road course, with current initiation fees costing up to $90,000 for unlimited driving days.

Monticello’s business model is being replicated all over the country. Private instruction is encouraged, and the club has its own racing series. During the summer, you’ll find members racing against one another in bespoke Mazda Miatas and Porsche Caymans. It’s competitive, but collegial. There’s an unspoken “no jerks” policy at MMC. As the member said, it’s a happy place.

Here, we take a look at the track options available around the country. Some of them, like Monticello, are totally private. Others are longstanding tracks like Virginia International Raceway, which offers separate club memberships.

The location: Pahrump, Nevada; one hour from Las Vegas.

Unique feature: It is the home of the Ron Fellows Performance Driving School, Corvette’s official high-performance course. Buy a new Corvette ZR1 and you get two days at Spring Mountain included.

Best suited for: The high-speed demon.

Tip: Best avoided in August, when temps can melt tires.

Don’t think of Spring Mountain as yet another Las Vegas distraction. “We are our own destination,” says Todd Crutcher, the director of marketing. There’s a new hotel and casino going up just outside the gates, and a host of condo locations, including a $22-million mansion under construction. That pop-pop-pop you hear is the indoor shooting range, another stress reliever, and the expansive pool is a good way to take the edge off the heat.

But all that is secondary to the track itself. And there is a lot of track. Right now Spring Mountain has 6.1 miles of asphalt snaking through the desert hills, making it the longest track in the U.S. But that’s still not enough, say the owners. After acquiring 600-plus more acres of land, Spring Mountain is expected to expand to more than 16 miles of track, eclipsing even that of Germany’s infamous Nürburgring Nordschleife, which is 13.1 miles long.

“Sure, it will be nice to have the title of the world’s longest race track,” says Crutcher. “But at the end of day we have the need for it. It gives our members even more options.” After all, how else would you test the Corvette ZR1’s 210-mph top speed?

Best suited for: The rhythmic roller.

Tip: Members like to cycle the course, too. Beware Horsepower Hill, which bicyclists have re-branded “Heartbreak Hill” owing to its steepness.

Location, location, location. It’s an overused mantra that still can’t be overstressed. Club Motorsports may not be able to outdo some tracks for size or amenities, but its location is unassailable. The course was literally cut from a mountainside.

Overlooking New Hampshire’s White Mountains, the course has some 700 feet of elevation gains and falls over two-and-a-half miles. President Jim Hoenscheid calls it an “adult rollercoaster.” “The difference is you get to bring your car along for the ride,” he says with a laugh.

The track only fully opened last year, but it already has 240 members coming from Maine to Boston in pursuit of the tops-turvy topography. It was purpose built to offer plenty of run-off and safety features, making it enticing for all types of cars, from new Porsches to vintage cars like the 1952 Jaguar D-Type running the course on a bright fall day. “We wanted to design and build a course to appeal to a wide variety of experience levels,” says Hoenscheid.

It gets high marks from those speed-aficionados in the know. Manfred Fitzgerald, the global head of Genesis luxury car brand and a former racer and team manger, recently drove the brand’s new G70 sports car here. “Club Motorsports holds up to the world’s toughest road courses, with corners and elevation changes to challenge both car and driver,” he says. “The quality of the surface, and the rolling hills in view as you transition through the cliffside circuit, are unmatched in North America.”

The location: Alton, Virginia, close to the North Carolina and Virginia borders.

The real-estate run-down: Private villas that overlook the uphill esses. One is currently for sale from $485,000.

Unique feature: Some of the world’s greatest racers have driven here.

Best suited for: Those looking for an old-school tack with lots of history and some very real frights.

Tip: Get the esses on the front half right and you’ll feel like a hero. Get them wrong, and you’re likely to end up in the safety barriers.

Paul Newman was a renowned racer as well as an actor, and he once said of Virginia International Raceway, “If there’s a heaven on earth, it’s VIR.” The track opened in the 1950s, and has hosted racers from Newman to Carroll Shelby. Pro drivers often complain that they don’t make tracks like they used to—by which they mean tricky road courses where speeds are high and consequences are real. VIR is one of those.

There’s something hallowed about this place. It is long and demands great attention, but once you get into a rhythm, those miles slipstream by, leaving you with a tingle of adrenaline and satisfaction.

The VIR Club is a bargain, with a mere $3,000 buy-in, allowing drivers the chance to spend time working on the intricacies. Connie Nyholm, the owner and CEO of VIR, says, “Drivers refer to VIR as a bucket-list track and the club helps people achieve that dream on a grander scale.” We bet that even Mr. Newman would agree.

The track: 4.1 miles, with the ability to separate the track into north and south courses.

Unique feature: One of the longest straightaways in the country: Speeds of 170 mph are possible.

Tip: Ask the rally-driving track director, Chris Duplessis, to take you for a hot lap in your own car. You’ll be amazed to see what it can really do.

There she is, Aurora Straus, winning pro races in the Continental Tire Series. And there she is again, a 20-year-old Harvard student, appearing on the television show Jay Leno’s Garage. Want to know how a private club membership might benefit the entire family? Look no further than Aurora, who started driving on-track at MMC when she was only 13.

Her dad, Ari Straus, is part owner of MMC, and the family has a house at the fabulous, adjoining Motor Club Estates. There’s a private connecting road which allowed Aurora—and several other younger kids who are following suit— to drive directly from the private house garage to the track without ever touching a legal road.

MMC has even begun to offer sleep-away, teen racing camps, one of those unique experiences which only a private track can pull off. Who says a race track can’t be a family affair?

The location: Dawsonville, Georgia, an hour from Atlanta.

The track: 1.8 miles, with various configurations.

Best suited for: The gentleman gearhead.

Tip: AMP is known for its superlative, separate Karting track and service—a great way to learn to go fast.

Southerners like their speed. You’ll find a number of world class race tracks near Atlanta, from the immortal Road Atlanta road course to the Atlanta Motor Speedway, an oval where NASCAR runs. But getting access to those tracks can be tricky. Enter Atlanta Motorsports Park, which began development in the late 2000s.

Think of Southern hospitality and transfer it to a race track, and that’s pretty much what you get. Penned by famed F1 designer Hermann Tilke, AMP resembles a modern F1 track in terms of safety and run-off, and some 75 percent of members have no previous track experience.

But don’t expect boring. Take Turn 12, which takes you up a hill and turns on a blind corner—all you see is sky above you, and it demands a measure of faith and confidence. Tilke had fun here, meaning the weave of high-speed sections, long corners, and compressions ensure that members won’t ever get tired of running the course.

Real estate run-down: None currently, but trackside villas are being considered.

Unique feature: The track can be driven in both directions.

Best suited for: The weekday warrior.

Tip: Look out for the last corner, the corkscrew, with a 60 foot drop in elevation.

Opened in 2015, the track was carved out of a local mountain fancifully known as Whiskey Hill, previously a squiggle of ATV tracks and hunting stands in the forest. “We didn’t want a boring race track,” says owner Fred Ferguson, “but one that scares you a little bit.” As such, Palmer has little in the way of runoff, and plenty of concrete barriers, so discretion is the better part of valor.

But come to this oasis in the Massachusetts woods on any day of the work week, and you’ll feel like you own your own personal race track. There are only 50 members currently, meaning you are often the only car running around the track. “Most of our guys come out with two or three buddies,” says Ferguson, “but I doubt you’ll ever be worried about too many people.”

The location: Thermal, California, around two hours from Los Angeles.

Fees and details: $85,000 initiation, $14,000 annual dues; plus members must buy a property lot and build a condo within five years.

Unique feature: Thermal puts an emphasis on resort-like amenities, from the cuisine to the service.

Best suited for: The car-loving cognoscenti.

Tip: If you’re driving from L.A., take the “Palms to Pines” back roads to Palm Springs, a superlative and thrilling drive.

Palm Springs is ground zero for many things fabulous, and Thermal delivers on the promise of a first-tier experience. From the driving perspective alone, it offers four separate tracks, from high-speed straightaways on the South Palm circuit to the more relaxed curves of the Desert course. The asphalt throughout is perfect and seamless, as smooth as the best road you’ll find in Germany.

But where the club really outdoes itself is in terms of amenities. You’ll get not one but three different places to eat, including full-on sommelier service at the Club House. The concierge will tend to private jet needs, while the on-site garage will turn the tires on that Aston Martin. There’s even a kid’s center, with day care.

And the condos—which are a requirement to buy, not an option—can get pretty wild. Palm Springs is known for its architecture, and trust that the villas here compete in terms of both space (up to 15,000 square feet, with ample room to entertain and park your fleet of cars), and level of art, if you consider cars under glass art. (And we do.)