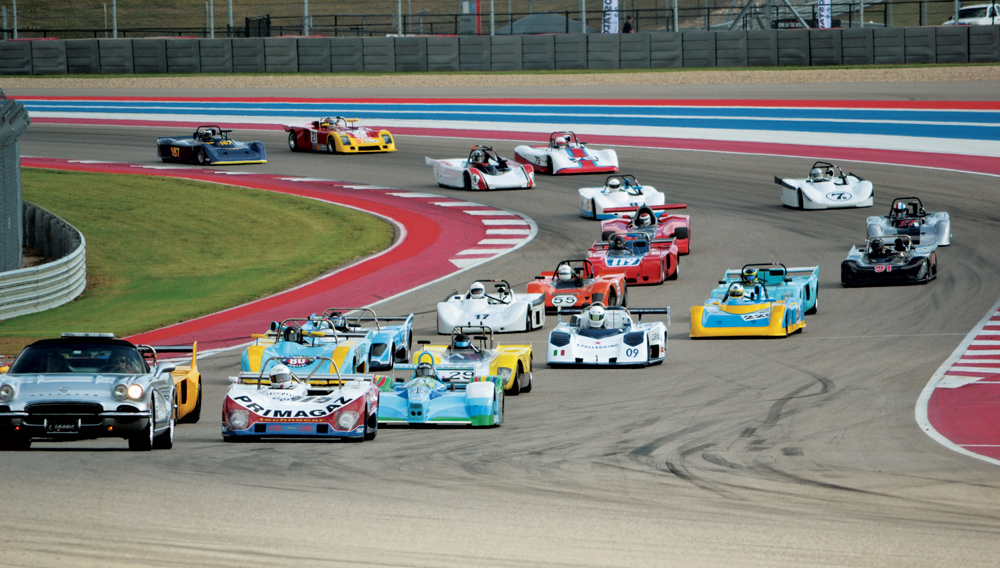 The Sportscar Vintage Racing Association’s National Championships gets off to a fast start at the Circuit of the Americas track in Austin, Texas.
View Gallery — 11   Photos 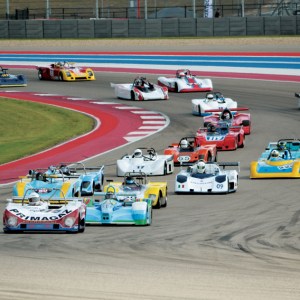 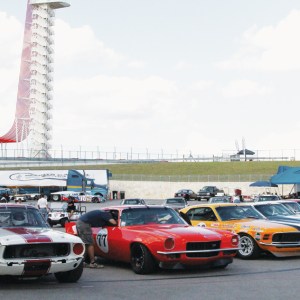 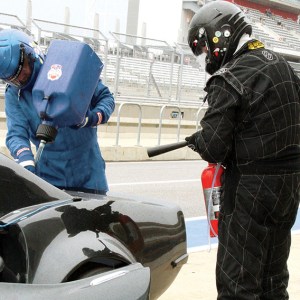 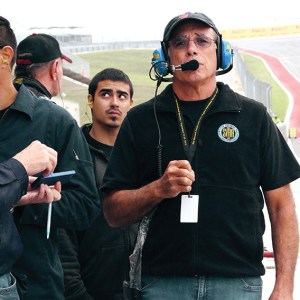 The cars in vintage racing may be old, but they keep getting better.

With a guttural groan, a gunmetal gray 1969 Corvette blazes into the pit of the Circuit of the Americas track in Austin, Texas, and its driver, Edward Sevadjian, stumbles out. Rivulets of sweat drip down his face, and he is silent as he rips off his blue helmet and gulps thirstily from the water bottle offered by his father. His eyes are dilated and his stare is intense—he looks like what he is: an athlete who has just completed the first leg of a long, focused race. While he hydrates, his pit crew—his dad, Alan Sevadjian, and several members of the Dallas-based team they both run, Duntov Racing—swiftly refuel the car, trying to keep this break brief, knowing that Sevadjian is racing not just other cars, but also the approaching rain. Their mechanic shouts over the noise of the track’s roar and the pit’s clamor of voices, “This is the first time he has blinked in 45 minutes!”

Sevadjian is competing in the Sportscar Vintage Racing Association (SVRA) 2014 National Championships, the second such competition since the pastime gained the more consciously organized structure of a sport, and this particular event is the Hawk Performance Historic GT/GTP Enduro. Twenty-seven big-bore cars have qualified for the 90-minute final, and each is required to take two five-minute pit stops—a rule that lends itself to various strategies. On this cloudy day in mid-October, the GTP cars are averaging about 2:30 for each 3.4-mile lap, which contains a whopping 20 turns (most tracks have about 10). Sevadjian is in seventh place overall and first place in the V8 American production car class when he pulls into the pit. But rain is imminent, and Duntov’s idea is to remain in this position before the yellow flag is waved and the field is locked by the safety car. “When the rain comes we have to be on the track to win,” the mechanic says.

For the first time, vintage racing is on its way to becoming a major mainstream player in U.S. motorsports—one that is just as appealing to middle-aged amateurs and former pros as it is to young drivers like Sevadjian at the beginning of their careers. For decades, vintage racing has been a fragmented hobbyist pursuit with more than 170 events in North America organized by more than 30 independent clubs, each with its own rules and regulations regarding the authenticity of the cars and how they are classified. But SVRA has been changing that. Since 2012, the group has been absorbing some clubs and partnering with others to build a national schedule of events that culminate in an annual championship. In 2015, SVRA will host 18 races around the country with an estimated 4,000 entries, representing a 25 percent increase over 2014’s participants.

While the emerging sport is certainly competitive, there is a like-minded congeniality at the heart of the pastime. Waiting at the finish line for the winners is a Bell helmet, a medal, and a red SVRA baseball cap. There are no cash prizes or sponsorships, but for Sevadjian and the 440 other racers from seven countries that turned out for the five-day event, the thrill of racing period-correct cars around the best tracks in the United States is more than enough—that and the bragging rights that come with beating fellow competitors, many of them close friends.

At the helm of this tight-knit community is SVRA’s CEO and president Tony Parella. A racing enthusiast and Harvard Business School alumnus, Parella is something like the mayor of vintage racing. At Circuit of the Americas, the slender, steel-haired 50-something wears a black racing jumpsuit and waves to friends and drivers from his golf cart as they call to him. His authoritative voice rings out greetings by name. He is clearly the glue binding a loose community of hobbyists into a structured sport with its own identity.

In 1988 the Vintage Motorsports Council formed as a governing body to keep up with the growing pastime, but the hobby still lacked a shared identity, a national schedule of events, and a more standardized way of grouping the cars—a complicated matter that involves the type of car, power-to-weight ratios, engine output, safety, and other variables, all while ensuring an exciting race for the spectators and the cars at both the front and middle of the pack. “It was always mom-and-pop-type deals,” explains Peter Klutt, who raced a red, white, and blue 1969 Corvette in Austin. “Tony has done a great job of coming up with a formula that works for everyone. He wants to truly make this a national deal.”

For Parella, building a national entity means starting an AM radio station that announces weather forecasts and changes to race schedules, launching the niche magazine Vintage Racing Quarterly, utilizing state-of-the-art timing technology, and partnering with the various clubs to offer more races. In 2012, when Parella purchased SVRA, it was hosting a mere five events at three tracks. Two years later, not only had he increased the number of races but he also brought iconic tracks to the schedule, including Indy and Sebring. And in 2015, two of the year’s 18 events will be hosted at new tracks, including the Portland International Raceway, culminating with the U.S. Vintage National Championships, an event he launched in 2013 at Circuit of the Americas—the newest F/1 Grand Prix track and the only one in the United States. “This is the most modern track in the world, and we have these relics on it,” says Parella. “It’s a celebration of the car and the driver.”

Those relics range from both open- and closed-wheel racecars from before World War II—including Parella’s own black, 81-year-old Chevrolet Bigcar with its oversize 34 on the grille, which he casually drove amid a pack of six during the National Championships—to muscle cars of the ’70s and ’80s to early 21st-century wings and slicks, including a 2007 Panoz DP01 Champ Car, originally raced by Canada-based professional driver Alex Tagliani, and a 2005 Audi R8—one of only 16 examples of arguably the most successful racing prototype of all time—which was originally driven by British pro John Herbert.

Though it is hotly debated how authentic these machines need to be, the general idea is to preserve the integrity of the car from when it was originally raced. According to Dennis Freiert, a former top mechanic for pro racing, enhancements do not have to be about performance gain as much as durability: “Purists want [the car] as it was out of the factory, but you can improve it, make it reliable, and still maintain the spirit of the thing.” Hundreds of thousands of dollars are spent on the preservation and maintenance of these historic cars, many of which are worth upwards of a million dollars. “We could be standing in a museum looking at these cars and wondering what they sound like,” says Lou Marchant, who races a 1934 MG J2, “but here you see what they were meant to do.”

For the National Championships, Parella created 13 racing categories or groups to accommodate these museum-worthy cars, the largest and most popular of which is usually Group 6—big-bore, mass-produced sports cars and sedans built prior to 1973: muscle cars. The 2014 National Championships featured almost 50 muscle cars in the group’s 20-minute championship sprint race, including the one driven by Klutt, who secured a first-place finish with his patriotic 1969 Corvette against a 1973 Porsche 911 IROC-RSR and a 1971 Corvette Roadster. “I race Group 6 because they are the bad boys of vintage. [The cars] are so fast, and the guys are competitive. It’s loud,” says Klutt. “But what I like about vintage is you can be any level and find a place to race.”

The people who love and race these cars are even more eclectic than the cars themselves. The slim, well-coiffed Klutt owns the Ontario, Canada-based racing team Legendary Motorcar Co. and stars in Legendary Motorcar, a TV show on Discovery’s auto-centric Velocity channel. Other celebrities in the sport include longtime sports announcer Mike Joy, AC/DC front man Brian Johnson, and former pro driver Doc Bundy, who raced a blue 1964 Lotus 23B with his Dallas-based team, Regogo Racing, to fifth place overall and first in its class. The win came after he crashed a black 1978 Lotus 79/1 (Mario Andretti’s backup car for Formula 1) during practice the day before. “I was coming out of the eighth sweeper, fast and flat, when the suspension broke. To add insult to injury, a rock flattened my left tire,” Bundy recalls while reviewing computer data from the Lotus 23B and strategizing with his team about the upcoming Group 5 qualifiers. “You have to use the curbs here [at COTA],” he explains. “It’s the only way to get around this track.”

Back during the final laps of the historic enduro, winning is the matter at hand. In the 22 minutes and 17 seconds since the second pit stop, Sevadjian fights to hold his position. As predicted, the rain begins to fall—and the yellow flag is waved, as if on cue, as Sevadjian finishes behind a 1972 Porsche 911 RSR. Though he takes seventh overall, it is a first-in-class win for the 34-year-old Sevadjian. In the pit, while he does his final lap, the Duntov team high-fives each other and cheers loudly. Sevadjian is composed as he gets out of his car and hugs his dad. For the first time since the National Championships began, his intensity dissipates. “I wasn’t going to lose,” he says to his dad and cracks a smile. At the podium during the award ceremony, he joins the winner, who took first overall (five laps ahead of Sevadjian) with his mighty silver R8—just another win for one of the fastest cars ever built.