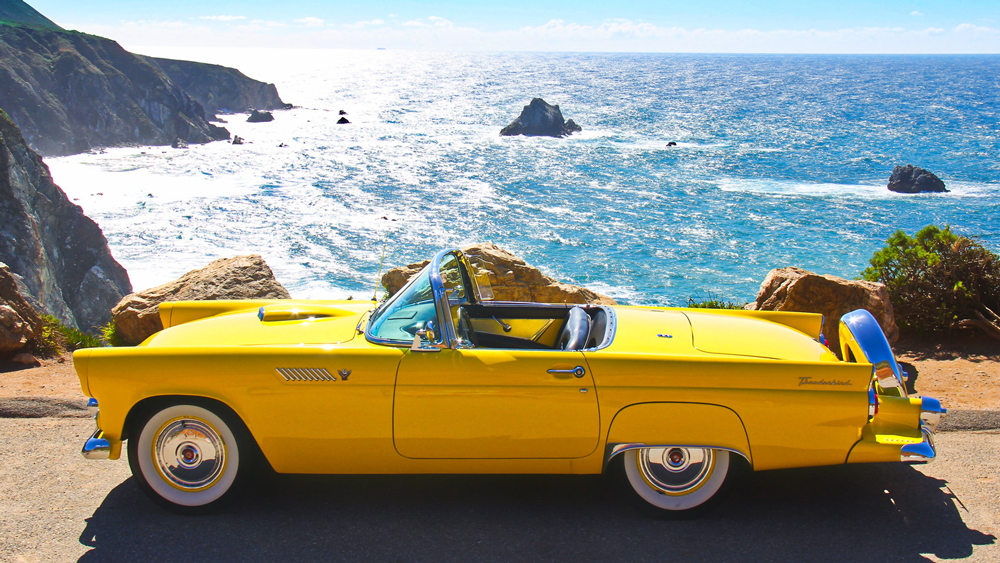 This Friday, August 16, automotive cognoscenti from around the world will convene at the Quail, A Motorsports Gathering, the annual four-wheel fete hosted by the Quail Lodge & Golf Club in Carmel Valley, Calif. One of the primary attractions of the region’s famed Monterey Car Week, the event—now in its 17th year—has made the property synonymous with collectible classic and contemporary automobiles. Although only a limited number of enthusiasts will be able to attend the six-hour concours, everyone can now get into its exclusive motoring spirit throughout the year, thanks to the Quail Moto Rally Experience.

The serpentine stretch of California’s Highway 1 along Big Sur.  Photo by bcw28/Shutterstock.

“Our goal is to provide guests with a unique opportunity to explore the best scenery and hidden gems of Monterey County from the comfort of their car, or the nostalgia of a classic car from a selection provided by Monterey Touring Vehicles,” mentions Craig Barkdull, one of the Quail Lodge & Golf Club’s directors. “Guests love the simplicity of the rallies. The course is already planned and stops suggested—you just have to choose your mode of transportation, pick your route and have fun.”

If the latest McLaren, Lamborghini, or Ferrari are home in the garage, the Quail’s collaboration with Monterey Touring Vehicles (MTV) makes available 34 bygone-era models, from a 1937 Mercedes Landaulet Limousine to a 1994 Jaguar XJS open-top tourer. The collection also contains even more eclectic selections, such as replicas of a 1927 Bugatti Type 35B and 1955 Porsche 550 Spyder, as well as a tribute to the 1965 Ford Shelby Cobra.

“Car enthusiasts understand that driving a classic is an experience like no other,” notes Heather Gardner, co-owner of MTV along with her husband Rob. “Add the words ‘convertible’ and ‘Monterey Peninsula’ and that’s all the inspiration you need.”

That motivation is enhanced by The Quail’s menu of motoring options, which comprise four drives that range from 83 miles to 156 miles and are designed to last less than four hours. The 151-mile Scenic Rally heads west through some of the area’s finest terroir and includes visits to two vineyards and a lunch. Foodies, however, will want to sample the 83-mile Coastal Gourmet Rally. This sojourn south above the Pacific Ocean heads to Big Sur and a meal at the renowned Post Ranch Inn. Those looking for the road less travelled may opt for the 123-mile Executive’s Rally and navigate the more remote byways to Pinnacles National Park and a picnic. But for a true gearhead’s getaway, the 156-mile Car Lovers Rally steers north to Elkhorn Slough, Los Gatos and, eventually, Scotts Valley for a pit stop at the Canepa Motorsports Museum.

But just because the itineraries are mapped out ahead of time doesn’t mean that spontaneity has to take a backseat. “It’s not so rigid that you can’t make unplanned stops along the way,” assures Barkdull. “If you see a beautiful spot, pull over and take some pictures. Find a cool restaurant? Grab a bite. While pre-planned, these offerings still have an element of customization.”

A tailored trip was exactly what I requested during a recent stay at The Quail. My girlfriend had not been to the area in ages and I wanted to make the weekend one to remember. The Quail became not just my consultant, but confident. The sublime weather made top-down touring de rigueur, and the team at MTV delivered a 1968 Chevy Camaro SS dressed in teal with white racing stripes while we fueled up on a light breakfast at the property’s Waypoint Bar + Kitchen. After all, our own engines needed to be primed before the Coastal Gourmet Rally we were rolling with.

After settling into the Camaro’s authentic, white interior and bringing the 5.7-liter V-8 to life, my copilot and I were transported to the Golden Age of American muscle, channeling our inner Steve McQueen and Faye Dunaway. The retro-chic rumble of 295 horses provided the sole soundtrack to the first recommended stop— a stretch of beach hidden by bluffs and overlooked by the seasonal migration of tourists. A quick stroll to the edge of a small cliff yielded not only a stellar view of the sand and surf but a new perspective on our future together. Taking a knee, I presented my navigator with a single question and a small diamond symbol of my intention.

A moment behind the wheel before asked the big question.  Photo by Viju Mathew.

The Quail’s staff seemed to be as eager as I was for the answer. Once notified on the sly, they set the rest of the day’s over-the-top touches into action, including a celebratory lunch at Post Ranch Inn’s Sierra Mar which featured a three-course, farm-to-table prix fixe from executive chef Johnny Black. Back at Quail, rose petals were strewn throughout our 2,000-square-foot residence, and a bottle of Dom Pérignon nestled on ice in preparation for the onsite dinner at Edgar’s. As for the 1968 Camaro, having to part with it was the only downside to the day.

Ranging in price from $280 to $380 per person, the Moto Rally Experience is another example of the Quail’s commitment to car culture and just one of many reasons to return. For some of us, anniversaries will now be another.