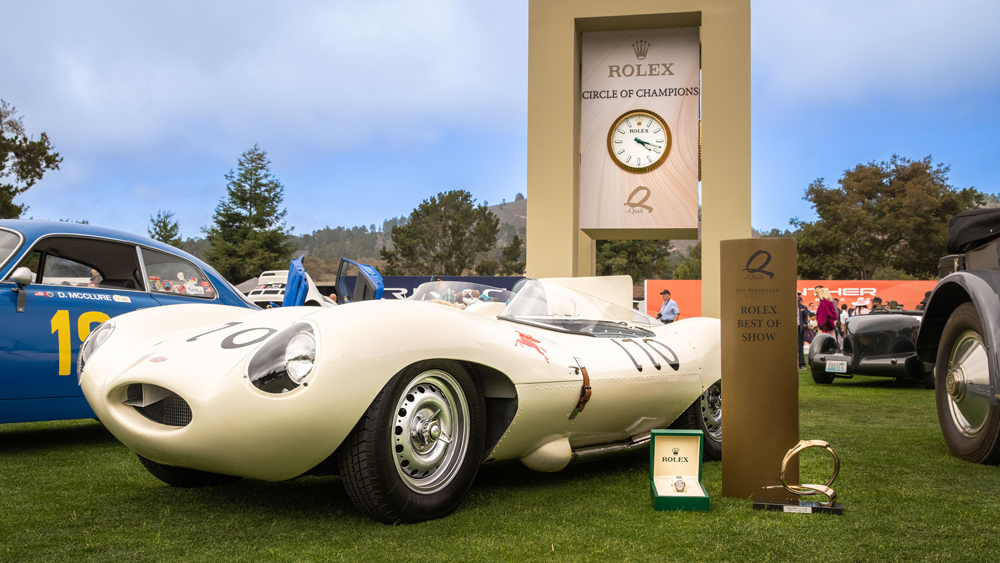 On August 19, top-tier automobile manufacturers and collectors converged on Northern California’s Carmel Valley for their annual version of show-and-tell known as The Quail, A Motorsports Gathering. And just as with classmates competing to impress their peers, the game of one-upmanship seems to escalate every year.

The 2022 edition of the combination concours and exposition, held at the Quail Lodge & Golf Club, served as the platform for 19 model premieres as well as a competition that saw more than 200 classics, supercars and exotics judged for the title Best of Show—an honor that went to a 1956 Jaguar D-Type.

Fitting for summer, reveals of new open-air models seemed to make the most impact. Maserati presented its 621 hp MC20 Cielo Spyder, which shared the stage with the MC20 coupe and new Grecale SUV. For Maserati’s global CEO, Davide Grasso, there was no question that the Quail was the ideal place to showcase the hardtop convertible.

Only a few yards away, Bugatti displayed its 1,600 hp W16 Mistral inspired by the 1934 Bugatti Type 57 Roadster Grand Raid and built on a revised Chiron tub. “Bugatti has always been associated with the purity of open-top driving,” stated Mate Rimac, CEO of Bugatti Rimac, in the official announcement. “So even though the legacy of the road-going W16 ends with the W16 Mistral, we continue the legacy of the roadster, first established by Ettore Bugatti more than a century ago.”

Another roadster that wowed the crowd boosts output to 1,817 hp—the convertible version of the Hennessey Venom F5, with each of the planned 30 examples priced at $3 million. Asked why he chose Quail for the variant’s first public appearance, Texas-based automaker and tuner John Hennessey explained that the pandemic has put more of a premium on open-air exhibitions as opposed to indoor car shows, adding, “At Quail, you have so many important reveals that it’s a great stage for us to be a part of . . . and buyers are here.”

It’s a sentiment shared by Gordon Murray, developer of numerous Formula 1–winning race cars and the seminal McLaren F1. Attending Quail to represent his own eponymous marque’s T.50 and T.33 supercars, Murray says, “This is where everybody is, and it’s working out well. We’re getting a lot of interest. I’m amazed at the recognition we’re getting in the states, to be honest, because we’re not a very big company.”

Gordon Murray brought his T.50 and T.33 supercars to the Quail.  Tom O'Neal, courtesy of Rolex.

McLaren drew onlookers like a magnet when the time came to lift the cover off its track-only Solus GT, limited to 25 examples that are all spoken for. Porsche’s presence was also hard to miss, especially with the presentation of its new 911 GT3 RS, as was the cadre of reimagined 911s, such as the Porsche 993 Turbocharged Coupe remastered by Gunther Werks and Singer’s results from its Turbo Study of Porsche’s 964 Cabriolet.

Naturally, EVs and SUVs were also well represented—the Lucid Air and Lamborghini Urus Performante among the standouts. The Raging Bull’s Urus SUV, named Robb Report’s Car of the Year in 2019, has become even more of a game-changer with its Performante iteration.

“With the development of the Urus, we saw that there was a margin of opportunity to improve the responsiveness and driving performance,” explains Rouven Mohr, Lamborghini’s new chief technology officer. “We knew we could do something more extreme,” he says of the variant that took two years to develop and swaps the air suspension on the original Urus for a steel suspension. According to Mohr, this change, paired with the new Trofeo R tires, are “the two main ingredients that contribute to the improved feedback to the driver.” The effectiveness of these primary modifications, among a host of others tweaks, was validated recently when the Urus Performante set a new record for an SUV in climbing Colorado’s Pikes Peak.

While the latest high-performance offerings seemed to draw the majority of attention, the concours component steadily rolled on throughout the day with the field vying for Best of Show and numerous other accolades. Among the latter were three commemorative categories that comprised the 50th Anniversary of the BMW M Division, awarded to a 1981 BMW M1 owned by Benjamin Clymer of New York; 70 Years of Jaguar and Their Wins at Le Mans, won by a 1950 Jaguar XK 120 Alloy belonging to Mark Miller of California; and All Things Mini, with a 1965 Austin Mini Cooper S owned by Eric Breslow of Nevada taking the title. Crowned as top overall car, however, was William Pope’s impeccably restored 1956 Jaguar D-Type.

The assemblage of machines and the quality of competition, both commercially and among collectors, certainly made for a winning day all around. Yet for all those in attendance, the opportunity to actually gather together again at the Quail and celebrate a common passion for the automotive arts, well, that felt like the real cause for bragging rights.

Click here to see photos of The Quail, A Motorsport Gathering 2022.

The 1956 Jaguar D-Type named Best of Show at the Quail, A Motorsports Gathering 2022.