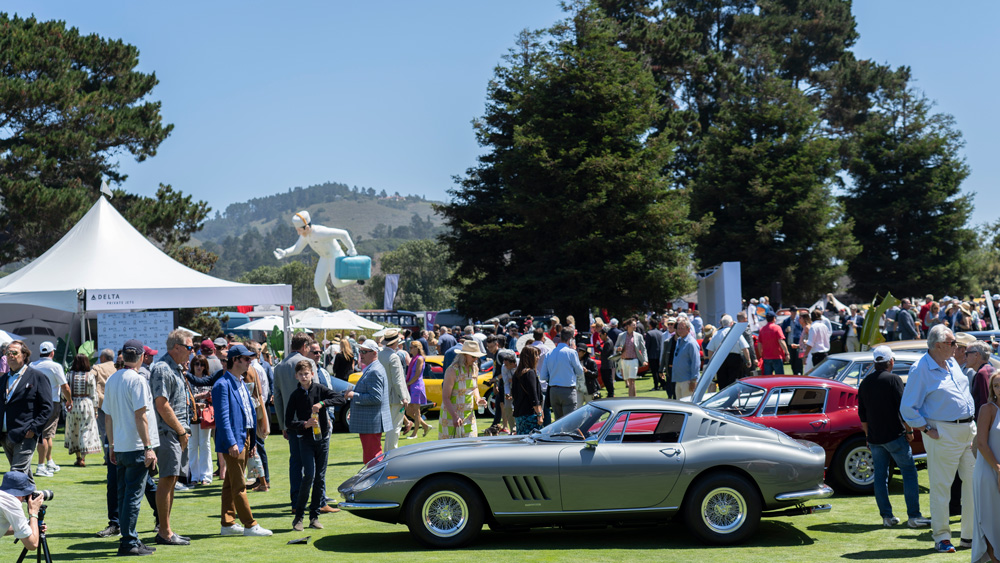 Although the Pebble Beach Concours d’Elegance still reigns Monterey Car Week in Northern California, the Quail, A Motorsports Gathering appears to be vying for the crown. On Friday, roughly 6,000 automobile enthusiasts flocked to the 18th fairway of the Quail Lodge & Golf Club in Carmel Valley, Calif., for close encounters with 250 of the finest four-wheelers on the planet. The field ranged from vintage racers and grand tourers to one-off prototypes, some being seen by the public for the first time.

“This is a tremendous celebration of automotive art, with all-encompassing generations of vehicles. You’ve got brands trying to disrupt and bring new styles and technology—there’s an incredible amount of machinery here,” says Mark Webber, nine-time Formula One Grand Prix winner, 2015 FIA World Endurance Champion and, currently, a Testimonee for Rolex, the official timepiece of the event since 2005. “The standard and quality here is just so high, and that’s why Rolex is here as well, because everyone knows that Rolex is synonymous with excellence and incredible levels of detail and build quality. It’s hand-in-glove—Quail and Rolex—when it comes to the machines on display.”

Presented by Peninsula Hotels, the Quail, a Motorsport Gathering lives up to its name, as it not only features a multi-category competition, but also provides leading high-performance and luxury marques a platform to showcase their latest production models and concepts.

This year saw 11 such premieres, including the global reveal of the 1,600 hp Bugatti Centodieci and the Stateside debuts of the Bentley EXP 100 GT concept and 2,000 hp Lotus Evija hypercar among others. While Pebble is the nexus for classic-car collectors in particular, the Quail seems to be where the entire industry comes to socialize, network and mutually admire all things automobile.

“Coming here each year, for us, is both a bit of business but also a huge amount of pleasure,” mentions Rob Dickinson, founder of Singer Vehicle Design. His boutique restoration house is known for its work reimagining classic Porsches such as the 964, several examples of which graced the lawn. “It’s an opportunity for our clients and staff to meet and see how what they contribute to building is appreciated in a particularly rarified atmosphere,” And being alongside Christian von Koenigsegg or able to rub shoulders with Aston Martin’s Andy Palmer next store is wonderful,” he adds.

But the Quail is still a contest at its core. This year, vehicles were judged in a total of 12 categories including Pre-War Sports and Racing Cars, Post-War Sports Cars (1945-1960), Post-War Sports Cars (1961-1975), the Great Ferraris, Supercars, Custom Coachwork and Sports and Racing Motorcycles. In addition, three categories specific to 2019 comprised the 25th Anniversary of the McLaren F1, 100 Years of Bentley Motors and A Tribute to the Electric Car Movement. The winning trifecta in those latter classes included a 1996 McLaren F1 LM owned by Frank Martin of Illinois, a 1928 Bentley 4.5-liter VDP Tourer belonging to David McGirr of Connecticut and a 1949 Mercury Coupe from California, respectively.

Three other victors from the Golden State included Malcom Welford’s 1976 Lamborghini Countach LP400 Perisopica, which topped the podium in the Supercar class; Mark and Veronica Boen’s 1966 Cheetah Coupe, capturing the Post-War Sports (1961-1975) division and Nicolas Clemence’s 1955 Porsche 550, which placed first in the Post-War Racing field. It was the latter model from Porsche that Webber—during one of the day’s fireside chats—confessed he would love to drive again. High praise for the model from one of the handful who have ever piloted the German marque’s 919 Hybrid.

Capturing the Spirit of the Quail award was a 1957 Ferrari 335 S, one of only four ever made. Although the model line comprised such a limited run, it became infamous when an example driven by Alfonso de Portago crashed at the 1957 Mille Miglia in Italy, killing nine spectators as well as Portago and his navigator.

Bragging rights for Best of Show was a 1931 Stutz DV 32 Convertible Victoria, with a body by Le Baron, owned by Joseph and Margie Cassini of New Jersey. The stunning vehicle reflects the performance and styling that the original Indiana-based Stutz Motor Car Company of America was known for while in operation from 1911 to 1935.

The variety of the aforementioned vehicles within the Rolex Circle of Champions is another reason why the concours has developed such a following from all ages.

Comparing it to Pebble, Tom Kristensen—nine-time-winner of Le Mans—notes: “The Quail is a relatively small event that’s very, very exclusive and covers a bit wider scope of the industry which, I would say, attracts more of the younger generation.”

One thing that can be counted on with as much certainty as a Rolex chronograph is that, thanks to the Quail, car culture will continue at full-throttle for the foreseeable future. Next year’s edition of the Quail, A Motorsports gathering will be on Friday, August 14.