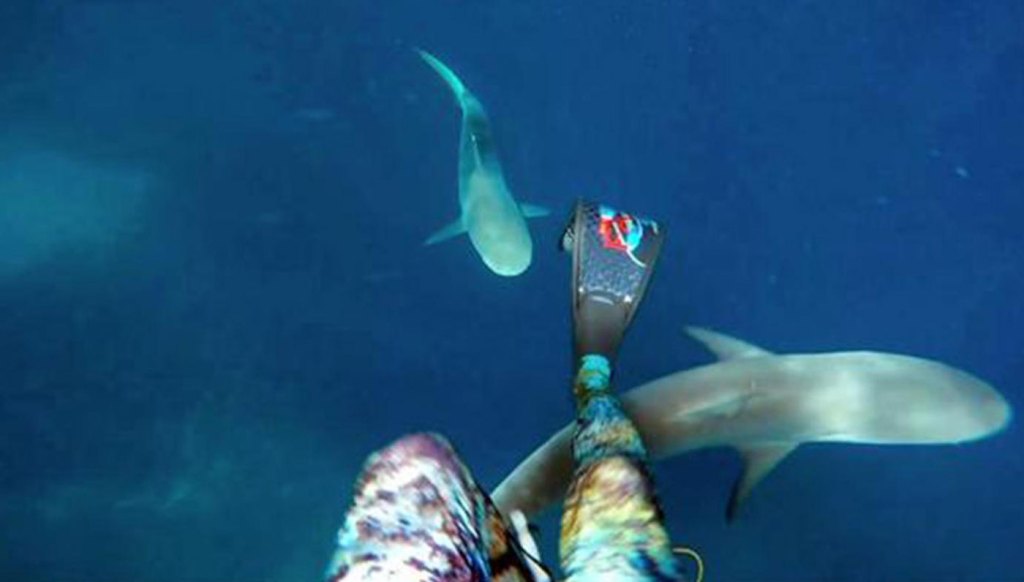 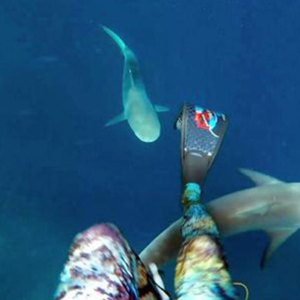 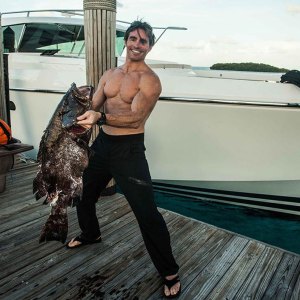 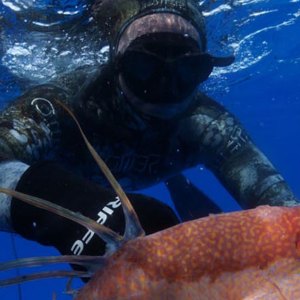 Chapman Ducote is a professional race car driver—he came in second in the final race of the Petit Le Mans in Atlanta in 2010, and has also placed highly in several other American and European races. You’d be forgiven for thinking that driving at 200 mph would provide enough of an adrenaline rush to keep anyone happy. But no. Ducote’s also an expert spearfisherman, often taking his Delta 54 motoryacht to remote islands in the Bahamas to jump into the water (without an oxygen tank, known as freediving), and then get his catches back to the boat before the sharks show up. Though it doesn’t always work out that way. We asked him to tell us more.

How did you get into spearfishing?

Do you have any world records yourself?

I don’t, but I’ve come close—not in tournaments, but just diving on my own for record fish. I was painfully close to a permit record—just two pounds shy of it—and I also came close to a hogfish record. That was with a pole spear, which is a type of spear that takes a bit more expertise than a regular speargun.

How long can you hold your breath?

My breath hold apnea record is 4 minutes and 58 seconds, and it really pisses me off that I didn’t get to five minutes. Apnea is when you’re doing a static breath hold, holding your breath for a personal best, versus diving. Every movement you make when you’re not breathing reduces your time without breath, so you need to conserve everything and lower your heart rate to almost a trance. You do a certain type of breathing to prepare your lungs, and that takes about 5 or 6 minutes, and then you take a peak inhalation, which gets as much air in your lungs as possible. And then you do something called packing, which is literally swallowing air, not really breathing. It can be dangerous because it can literally explode your lungs. You can’t do it too much, and you need to get down to depth quickly, so the air compresses; otherwise, if you sit on the surface, your lungs will explode.

Ever had any near-death experiences yourself?

Yeah, I’ve had two different types: some from sharks and some from shallow-water blackouts. Seventy percent of freediving and spearfishing deaths happen between 0 and 15 feet deep. You’re coming up and you think you’re going to be ok…and then you black out and drown. Nobody really drowns at depth. You don’t get the urge to breathe down there.

This is something that nobody really knows. If you think about it, if you pass out underwater, how can you not drown? Well, your brain shuts off, and you’re not breathing, so you don’t immediately drown. Lets say your holding your breath underwater and you pass out. You’re passing out because your body is saying, Well, I only have 20 or 15 percent air left, so it’s time to shut this sucker down because I need to keep the important stuff, the internal organs, working. Your arms and legs start burning first, and eventually it goes to your head. It’s like shutting off the monitor on a computer screen. But you don’t breathe. Even if you’re passed out, your body won’t take a breath as long as your face is underwater. Your body won’t kill itself. And it knows you only need a teaspoon of water in your lungs to drown. When your body wakes up after passing out—when you’re about to actually die—it takes what’s called a terminal gasp. So if you can get above water before waking up, you’ll live, so you need a buddy that can get you to the surface in an emergency. Because if you’re still underwater, and you take that terminal gasp, you die.

I blacked out once. We always dive with something called a float line. It’s attached to a buoy at the surface. And we use them because some of these fish we shoot are so big, we can’t get them back to the surface. So we shoot the fish and your line is attached to the buoy and you can shoot it and then pull it up from the buoy.

So one day I was using a 100-foot buoy line, and there was another guy using a 75-foot line, which I should have been paying attention to. And so as we went in for the dive, we mistakenly grabbed each other’s gear. So I went down and I shot this fish. And I knew it was deep but my buddies were there and I was comfortable doing the dive. But I got to 80 feet and the line went taut, which surprised me because I thought I was going to 100. And I have this beautiful fish lined up and I had done all my breath preparation and I was pissed off. So I disconnected the float line from the spear. Big mistake. I swam the extra ten feet and hit the fish. Another big mistake. The second I did it, I looked up and saw two of my buddies swimming down to me, and I knew they’d probably meet me halfway and help me to the surface. No way in hell would I make it to the surface with this fish, but I knew I could make it halfway and hand the fish off, and then get myself to the air. So I get to 50 feet and hand the fish off, and that’s where I lost my memory. When they got me up to the surface I had loss of motor control, which is violent convulsions. I was on the surface of the water, flailing, and the boat’s far away. Scary. But the convulsions actually snapped me awake. And I came to and my first words were “Where’s the effing fish!?”

And my friends were like, “Oh, we threw the fish.”

And they were like, “You were going to die, man!” And I was so mad. But when I looked down I saw the fish was tangled in one of the buoy lines, so we ended up pulling it in anyway. But those guys saved my life, no question. And you have to dive with guys who know what they’re doing or you’ll die, plain and simple.

Whoa. OK, now for the really scary part. Tell us about the sharks.

Oh, the sharks. Sharks are omnipresent when you’re spearfishing where we’re spearfishing. They’re not always in sight, but they’re always in the neighborhood. Lots of bull sharks, which are very mean, and account for most of our encounters. You’ve also got tiger sharks, which are really bad and have a bold temperament. They don’t get fazed by anything. You can scare off a bull shark, but tigers don’t scare, really.

If I see a shark in the water, the first thing I do is swim directly at it, very aggressively like I’m going to kill the shark. And I actually tell myself that in my brain: I’m gonna kill this thing. Because when I tell myself that, I exude certain body language that tells them they should be like, “Hmm, I should get out of here, this guy is going to kill me.” Because you have to remember what you look like underwater, 6-foot body, 4-foot fins, and a spear—you’re like 12-, 13-, 14-feet long underwater. You look pretty intimidating even to a shark, especially if you’re down there killing things.

The worst thing you can do to a shark is show fear. If you show fear, you’re done. If you swim away, you’re done. You have to swim at them. And it’s hard to practice. You tell people that on land and people are like, “Yeah, OK, I’ll do it.” But then they get in the water and it’s a different story. Your brain won’t let you.

But for me, it’s second nature at this point. I don’t think twice. It doesn’t matter what it is. A 16-foot tiger shark—go at it. The bigger sharks, I’m not quite as aggressive with, though. A smaller shark, say under ten feet, if it’s bothering me, I’ll stick my fingers in its eyes, grab its tail, punch it. But bigger sharks you can’t do that with, because if they do react it’s going to be an interesting day at the office.

Now we had a situation down in Cay Sal [in the Bahamas] a few weeks ago, where my buddy was in a blue hole, shot a decent fish, and the visibility was so-so. And suddenly two sharks came out of nowhere, bulls. So I did what I’m supposed to do and I went at them. And while I was doing that another shark came in and bit his fin. And I saw that and went after that shark. And when I did that a shark I had originally gone after came in and bit his other fin. One of the sharks eventually bit my fin too! I ended up stabbing one in the gill plate and they started to leave us alone just a bit, but then the coup degrâce. The biggest shark of the bunch made a run right at me. And when I saw that I went right at him, and I had my pole spear extended, and I went to stick him, and right when I did that he bit it, it’s on camera, you can hear his teeth crunching on the carbon fiber. So I reached down and punched him in the head as hard as I could. And he released the spear and swam off. Sometimes it’s actual hand-to-hand combat with sharks.

My favorite thing about spearfishing is the adrenaline, the challenge, the physicality of it combined with the mental aspects of the sport—it’s kind of like race car driving if you think about it. It’s a total challenge. You’re in a foreign environment with primitive gear, and you’re taking on these creatures on their home court. It’s adrenaline-fueled for sure, but you also have to be in a really calm state of mind. It’s always a delicate balance.