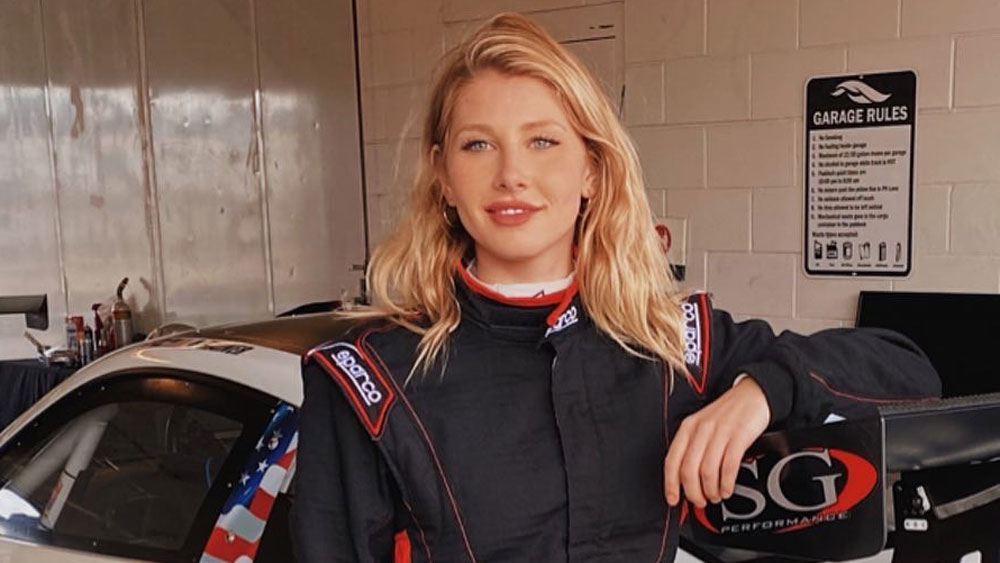 On the heels of the last year’s Monterey Car Week, I found myself at WeatherTech Raceway Laguna Seca unwinding in the passenger seat of a Porsche 911 GT3 RS. The racing buckets are an unlikely relaxation spot given the 2-seater’s neck straining, retina detaching tendencies. But there I was, nestled comfortably as my pilot attacked the 2.23-mile circuit.

How a person controls a car in any scenario, let alone a high-powered scalpel carving one of the world’s most challenging racetracks, is a window into their temperament. This inauspicious circumstance spoke volumes to race driver and photographer Alex Hainer’s constitution.

On a Southern California beach, one might mistake Hainer’s piercing blue eyes and classic bone structure for a front-of-the-camera personality. The Los Angeles native has worked on fashion campaigns as a digital retoucher for Milk Studios in the past, and her current photography captures personalities with earnest, soulful impact.

But despite the glossy gigs, the now 22-year-old spent much of her adult life to date fixed resolutely behind the lens, electing for an elusive online presence that only featured her subjects. Her work, she figured, should speak for itself.  Only recently has she started sharing images of herself on her Instagram feed, acknowledging that she needs to “start being comfortable with having myself out there.”

That distrust of the limelight translates palpably to her on-track demeanor. Though we were sharing the circuit with pricey 911s modified by Singer Vehicle Design, and a seven-figure McLaren Senna, the high-profile traffic may as well have been a sea of econoboxes. Hainer held her own. And rather than fight the 520 hp Porsche, she managed it even-handedly, treating every corner entry, apex and exit with precision and forethought. And then it happened.

On the 1,486-foot straightaway, where triple-digit speeds escalate as a blind crest approaches, a squirrel darted into the path of the silver sports car. The primal reflex would be to flinch, swerve and avoid the erratic critter. Instead, Hainer kept an unnervingly linear path, nailing the small animal with the GT3’s front air dam and delivering it to a swift and certain demise—a move, performed instantly and stoically, that saved us from potentially losing control or hitting another vehicle. Also notable: She’s a vegan.

“It one hundred percent comes from dad, genetically,” she later tells me in the pits, while the GT3 RS’s front splitter was being taped together from the high-speed impact. Her father, Anders Hainer, has raced in the Grand-Am series and counts a panoply of classic ultra-high-performance sports cars in the household, most of them hailing from Zuffenhausen.

Alex as a child, with her father Anders Hainer.  Photo: Courtesy of Alex Hainer.

Alex was drawn towards speed at a young age but emphasizes that she was not pressured. “It’s my favorite thing ever,” she says. “It’s the only thing I can imagine myself doing fully. I’d love to just put 100 percent into it.”

Seeing her potential, Hainer senior has incentivized his daughter with a full season of pro racing if, and when, she is able to beat his lap time. But the offer is more than a dangling carrot. It’s a logical agreement that validates when the time is right. “It’s not just a reward,” he explains. “I know what it takes to be competitive at racing, and she would probably need to beat me to be competitive. I wouldn’t want to go to pro racing and be a backmarker, I would want to be at least mid-pack and work up from there,” he says.

Since that sunny Monday at Laguna Seca, Hainer’s plans, like many, have been derailed. The virus that yanked the e-brake on most organized motorsports has also put Porsche’s factory program on ice. “That’s my dream job,” she said on a follow-up call from Idaho, where she spent the summer.

Alex Hainer with the writer.  Photo: Courtesy of Alex Hainer.

In lieu of sponsored competition, Hainer has participated in Porsche Owner Club races in a first-gen 991 Cup Car, and keeps her skills sharp with the iRacing simulator. She says the virtual feel is markedly different from real-world driving. “I’m not good at it,” she admits, “but I’m determined to be good at it.”

Despite the headwinds, Hainer also readily acknowledges the silver lining of these unusual times. “I came into racing because of my dad, and it’s always been something we’ve bonded over. It’s kind of nice to do one more year of club racing and spend that time with him.” As for the future, Hainer’s eyes are aimed where any good racer’s should be: where she wants to go.