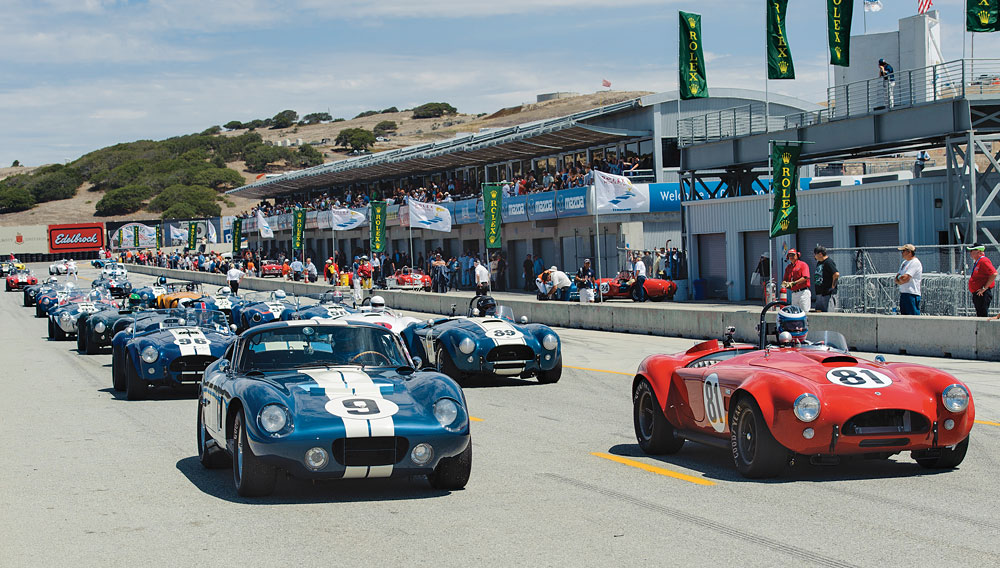 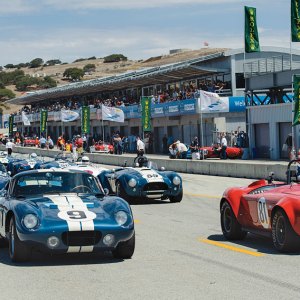 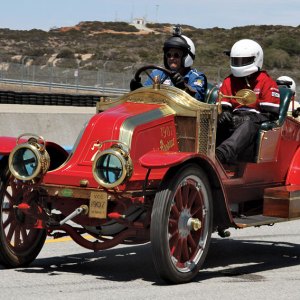 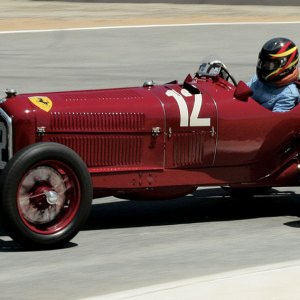 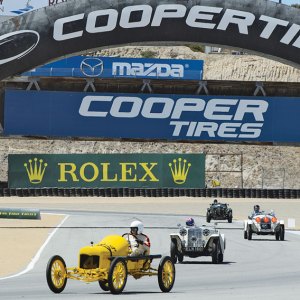 Alan Travis’s heart is pounding as he approaches the entrance to a two-turn corkscrew about two-thirds of the way around the Laguna Seca racetrack, and if it weren’t for the high-pitched squealing and creaking of the wooden wheels underneath him, he’s quite sure he would hear it. Seated behind the wheel of his 1907 Renault Vanderbilt Cup racer—a car that he describes as “a stagecoach with a locomotive motor”—Travis roars over the 2.2-mile track, pushing the limits of the 500 cu in, 4-cylinder engine and muscling the 3,700-pound antique racer to 2,000 rpm, 500 rpm above the point where the car’s maximum 61 hp is achieved. Travis has driven the car as fast as 84 mph on open roads in the past, but this is the first time he’s put the car through its paces on such a challenging track.

Once in the corkscrew, Travis’s prior apprehension gives way to intense concentration as he moves his right hand from the wheel to the 4-foot-long brake and shifter levers located on the outer right side of the bright red, 105-year-old automobile. The smell of gasoline wafts over him and his riding technician, Paul Magoolaghan, as 27 gallons of fuel slosh around a vented copper tank just behind the seats. The crowd that fills the grandstands cheers loudly for Travis and his antique racer, but most of that exuberance is muffled by the roaring engines of much younger and nimbler racecars speeding past him.  It’s a hair-raising turn, especially for a car that was built to race on much flatter, straighter racetracks, but Travis and Magoolaghan make it through and grow more confident as the race goes on.

This is the first heat of the Pre 1940 Sports Racing and Touring Cars division of the vintage races of Monterey weekend, officially known as the Rolex Monterey Motorsports Reunion (www.mazdaraceway.com/rolex-monterey-motorsports-reunion), and it’s clear that Travis and his 1907 Renault Vanderbilt Cup racer are the fan favorite. He knows that he won’t challenge for the checkered flag during these races, not when competing against the likes of 1939 BMW 328s and 1930 Alfa Romeo 6C 1750s. But the thought of victory laps is not what brings most vintage racers to Southern California each August. The merits of this motorsports reunion are far nobler.

Once upon a time, they were just old cars. Worse, they were old racing cars, worn out, no longer competitive, unsuitable for anything but the scrap yard, or perhaps a museum display. Today, though, old racing cars are sought after, restored, and preserved, especially if they have a story to tell; and while most are 30 to 60 years old, some are much older, survivors of what’s called the “golden age of racing.” There may be some owners who are content to garage these cars and occasionally take them out for shows, but a growing number want to slip behind the steering wheel and experience the thrill of these automobiles as they were intended—on a racing circuit.

“These cars, for their day, must have seemed like rocket ships,” Travis says of the Renault racer that thrilled the crowd at this year’s vintage races. Inspired by a similar Renault that won the first French Grand Prix back in 1906, William K. Vanderbilt Jr. ordered 10 of these cars for himself and his friends to race around their adjoining Long Island estates. On straight dirt roads at the turn of the 20th century, a 1907 Vanderbilt Cup racer could reach speeds of 90 mph, more than 70 mph above the legal speed limits of the time. “The driving sensation of this car is intensified to the highest order by doing the restoration, reading all the history, and putting myself in that part of history that the speed pioneers created,” Travis continues. “The car is an honor to own. It was as powerful and fast as could be had by the wealthiest sportsman of the time, and it behaves just as it did when new.”

While there was always a place for early automobiles in time trials and hill climbs in the eastern United States, the Vintage Sports Car Club of America is  responsible for organizing historic racing events that date back to the late 1950s. However, those events were limited  mostly to prewar vehicles, and it wasn’t until the early 1970s that contests open to newer cars were established. By the mid-1980s, more than 60 vintage racing weekends dotted the calendar in areas all around the country, and each one attracted hundreds of entrants. Spectators flocked to these races, eager to see and hear automobiles that they may have owned (or wished to own) in their youth, or to catch a glimpse of famous automobiles that they may have only read about. The most famous of those events was known as the Monterey Historic Automobile Races at Laguna Seca, though today it’s known as the Motorsports Reunion.

At this year’s event, the paddock was filled with almost 600 notable racing cars, running the gamut from the ancient Renault, which would top out at about 61 mph on the track, to Porsche 962s from the early 1980s—cars capable of top speeds approaching 240 mph. Old Indy cars shared space with single-seat formula racers, while retired NASCAR stock cars had a chance to relive their glory days. The field even included a handful of American “Specials” from the 1950s, including the “Monsterati,” a homebuilt road racer constructed around an early Ford V-8 frame and various suspension pieces scavenged from a junkyard. This unlikely racecar is a perfect example of the type of vehicle that draws thousands of spectators to the Motorsports Reunion each year.

The Monsterati was built by engineering student Bill Janowski and first saw action in 1957. Janowski was confident that he could build a winning sports car for much less than the price of the exotic European thoroughbreds of the day, and after investing only $900 to build the car more than 50 years ago, Janowski soon realized that he was right. After one race, Janowski had qualified for a national Sports Car Club of America (SCCA) license. The car originally was powered by a Ford flathead, but it found greater success at hill climbs and other events after receiving a Chevrolet V-8 upgrade.

The car faded into obscurity for a while, but once vintage racing events began popping up, the car came out of storage to thrill crowds again. David Swig bought the car a couple of years ago to get a taste of racing from an era that he didn’t experience firsthand. Swig’s father owned a successful imported car dealership in San Francisco, which meant his son grew up surrounded by high-performance, exotic sports cars. When the historic automobile races took root at Laguna Seca, Swig’s father was “hanging on the fences,” as his son recounts. But once similar racing events emerged farther up the California coast, the longtime sports car enthusiast realized he could finally experience the rush of racing.

Swig was only a young child at the time, but he knew, even then, that someday he would follow in his dad’s footsteps. That premonition was fulfilled in 2003 when, at the age of 17, Swig competed in his first vintage racing event. It wasn’t long before he graduated to the 1959 Alfa Romeo Sprint Veloce coupe, which his father had purchased in 1978. “It was a great car to learn in, and I suppose it will stay in the family forever,” he says.

In 2009, Swig brought the Monsterati to the “Pre-Historics”—the less-formal opening weekend of racing at Monterey—and it was to become his most memorable experience. “I found myself lined up on the grid next to an old Scarab sports racer, my favorite racecar of all time,” he recalls. “It was my first race in the car, and I took first overall in a photo finish against the Scarab, the first one ever built.”

Ranson Webster began collecting rare, restored vintage racing Porsches in 1998. He was content to display them at venues including the Pebble Beach Concours d’Elegance, but when good friend and longtime vintage racer Dr. Lou Sellyei suggested that Webster learn to drive them properly and safely, the doors to a new world opened. After attending several driving schools and obtaining a racing license, Webster entered his ex–Le Mans 1973 Porsche RSR at the 2002 Monterey Historics. “Wow, what an experience,” he recalls. “I became captivated and realized that it required all the mental and physical strength that I could muster . . . but I loved the challenge.” Soon he began adding other historic and significant racing Porsches to his Reno stable, and now he drives those, too. “I enjoy learning as much as I can about the history of each car that I own and race. It’s all about preparing these beautiful art forms and seeing them in action just as they were back in the day.” Webster says he also enjoys the camaraderie of the other drivers, sharing the history of each car with appreciative spectators, and gaining the satisfaction of performing at the highest possible level.

Webster’s story is not unusual.

Jon Shirley brought his supercharged 1934 Alfa Romeo Tipo B “P3,” which at one time was driven to an improbable victory in the 1935 German Grand Prix by the diminutive Italian racing champion Tazio Nuvolari. There, vying against the might of the all-conquering factory teams from Mercedes-Benz and Auto Union at the fabled Nürburgring, Nuvolari came from behind in his outclassed car to win in stunning fashion. He then frosted the cake by providing his own copy of the Italian national anthem and a small Italian tricolore, which his overconfident hosts had not bothered to make available, so certain were they that German machines would dominate. When Shirley sits in the same dark red two-seater bearing the Scuderia Ferraricrest, he surely can imagine how Nuvolari must have felt that afternoon nearly 80 years ago. In Shirley’s mind, this car is best appreciated on a racetrack, and that’s where he exercises it, delighting spectators and still winning vintage races all over the world.

However, on this sunny racing weekend, Terry Gough provides one of the most exciting contests, driving an immaculate 1965 Corvette roadster to a hard-fought victory over Rob Walton’s 1964 Ferrari 250 LM coupe in the class of 1963–1966 GT cars over 2,500 cc. The two traded the lead on almost every lap before the Ferrari finally faded down the stretch. Gough first scratched his itch for racing on motorcycles in 1964 and gradually progressed to SCCA events, then midgets and V-8 sprint cars. It wasn’t until 2000, when Gough was looking for something different, that a friend encouraged him to try vintage racing. “He said, ‘all you have to do is put gas in it, check the tires, and polish it; that’s all!’” Gough recalls. “I thought that sounded like a pretty good plan.”

Vintage racing isn’t quite that simple. Gough and his crew have invested countless hours of work on that 1965 Corvette roadster, but he insists every ounce of work has been rewarded. “It’s more relaxed,” he says of racing in vintage events. “You’re not chasing points or money or trophies. You get to meet such a diverse group of people, and the cars are wonderful.”

It’s a sentiment echoed by almost every vintage racing participant. “You will meet wonderful people who all share the same desire to see these great vintage racing cars in action again,” says Webster. “Sitting on a concours lawn drinking Champagne and discussing how many hours you spent polishing a magnificent car is nowhere near the ultimate experience of driving one.”

As the old adage states: It’s more fun to drive a slow car fast than a fast car slow.