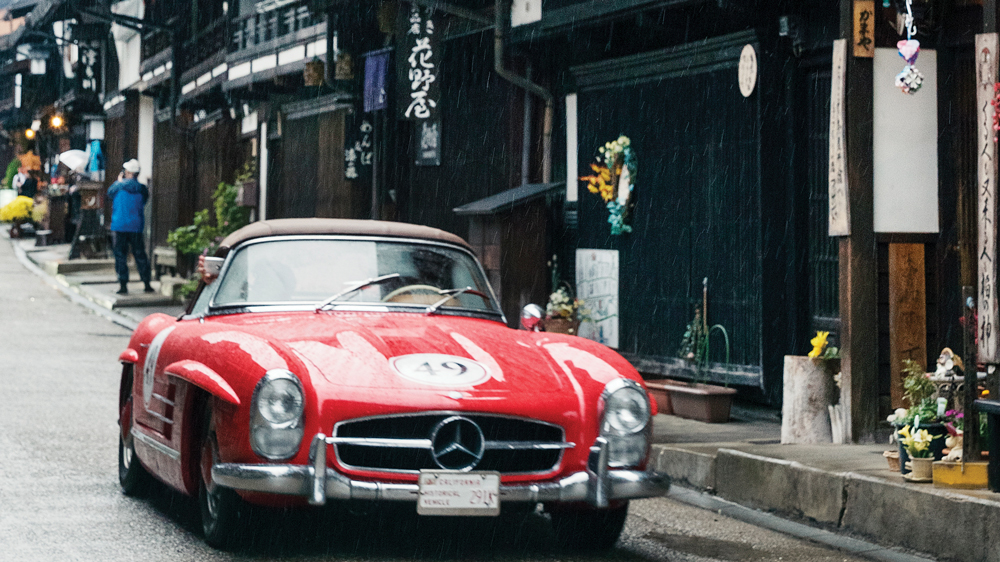 “Quite an impressive convoy we’ve got going, don’t you think?” David McKirdy asks, and it’s impossible to disagree. Ahead of us on the road, squiggling through bamboo forests, are an inky-black 1937 Bugatti T57, a hunter-green 1934 Bentley Derby, and a 1931 Rolls-Royce Phantom II the color of lemon meringue. Our car is no jalopy, either. Also a Phantom II, it’s an immaculately restored 1934 masterpiece with an open-air front cab for the chauffeur and a body by Messrs. Barker & Co., coachmaker to King Edward VIII. As for our automobile’s ownership, the car’s Brewster-green paintwork is the giveaway. In the words of MI6 agent Mary Goodnight, who derisively briefs James Bond in The Man with the Golden Gun, “Everyone knows all the green Rolls-Royces belong to the Peninsula.” McKirdy, who’s at the wheel today, is the Peninsula Hotels’ roadmaster in chief, you might say. A son of Scotland raised in Hong Kong, he’s been looking after the luxury group’s vintage vehicles in one capacity or another for nearly 25 years and is the go-to driver when the driving calls for going somewhere special. The event that brought our convoy together on this Japanese mountain road certainly qualifies.

Launched in 2009, Rally Nippon has quickly become Japan’s splashiest showcase of collectible cars. The 4-day event attracts automotive enthusiasts from around the world, who apply for 80 slots reserved for pre-1975 vehicles. Peninsula Tokyo—where our Phantom II usually resides—recently signed on as sponsor of the rally, which is held annually in October or November.

The motorcade travels more than 600 miles on its journey from Kyoto to Tokyo, parading through 16 cities and five UNESCO-designated sites along the way. Even for the non-fanatic, the course route is a dazzler—​especially during the autumnal season of gold- and rust-colored koyo leaves.

Our journey began in Japan’s former imperial capital with welcome cocktails and a traditional geisha performance at the new Four Seasons Hotel Kyoto. The next morning, with drizzle falling under silvery skies, drivers convened at Nijō Castle—which was built for the founding shogun of the Edo shogunate—for vehicle inspection and a blessing
of the fleet. An imposing Shinto priest in white pure-cloth robes waved a paper haraegushi, or lightning wand, and sent us off with “Itte rasshai,” Japanese for “Go and come back.”

He made it sound so effortless. But now, a few hours later, we’re going nowhere. On the steep climb to Enryaku-ji temple, where the so-called marathon monks walk thousands of miles in a lifetime ritual to reach enlightenment, our poor Phantom has sputtered and died. The million-dollar dream team we were driving with is gone. As McKirdy fusses under the bonnet
with ancient hoses and pumps, it occurs to me that navigating our way falls upon the one person with the maps, guidance systems, and 135-page look book of Japanese road signs.

That person would be me. It’s hard to say what’s more fascinating at a rally like this—the cars or the assorted magnates, expat billionaires, and full-time gearheads in the drivers’ seats. One gentleman from Japan is operating the same fire-engine-red 1952 MG TD his father wooed his mother with at dance halls. The magnificent 1957 Mercedes 300SL Gullwing that whizzes past our stalled vehicle once shuttled a visiting U.S. general to meet the emperor at the Imperial Palace. Then there’s that ’31 Rolls Phantom II that was leading our caravan. Its owner, Tad Takasu, first spotted the beauty outside the Ambassador Hotel in Los Angeles 40 years ago and knew he needed to own it one day. Last spring, when a collector from Madrid put the vehicle up for sale, Takasu bought it and had it restored. But the overhaul wasn’t complete in time to ship to the rally, so he had the Rolls flown to Japan on a Lufthansa commercial flight.

It’s this level of passion that first prompted organizer Yusuke Kobayashi, a real estate appraiser who inherited his love for classic automobiles from his late father, to launch Rally Nippon. Kobayashi knew Japan had a tight community of classic-car aficionados, but he also wanted American and European entrants to experience Japan’s little-traveled and breathtaking backcountry. The event is now as well regarded internationally as the older La Festa Mille Miglia—Japan’s answer to the Italian Mille Miglia rally.

Rally Nippon is a competition of precision, not speed. Whoever most accurately covers the route within the time allowed is the winner. If you miss a checkpoint, penalties accrue and points are lost. Time is measured in milliseconds. As navigator, I’m less concerned about winning the race than with respecting traditions—of Japanese roads, of car-rallying culture, and even of the Peninsula. The brand’s relationship with Rolls-Royce stretches back to 1970, when its Hong Kong hotel raised the quality of cars shuttling its guests around the city. The company now has four 1934 Phantom IIs in service—in Hong Kong, Tokyo, Shanghai, and Paris. They also own a number of newer Phantoms, including 14 in Hong Kong alone. The brand’s involvement with collectible automobiles extends to another event—the Quail Motorsports Gathering in California. The 2-day, 200-or-so-mile Quail Rally along the cliffs of the Monterey Peninsula last year celebrated its 20th anniversary.

If anyone would notice our absence at a check-in point (were I to get us stupendously lost, let’s say), it would be the gentleman driving rally car No. 1. Michael Kadoorie, the sprightly third-generation owner of the Peninsula group and a czar of the Hong Kong business world, had already advised me to abide by the cardinal rules of codriving: Maintain unwavering focus, stay ahead on directions, and allow no surprises when it comes to calling out the next left or right. “You don’t want your driver making a hairpin turn at 60 miles an hour in a 3-ton, 80-year-old automobile,” were his exact words.

After working his magic on our behemoth’s leaky gasket, McKirdy gets the Rollsmoving again. I pore over my pace notes while monitoring two GPS devices to ensure we’re on track, making adjustments for construction sites and unforeseen hazards—not just on the road but also in the car. The Phantom’s passenger exit is having latch problems today (kinks are part of the joy of classics like these). The door occasionally flings open on tight curves—which means I’m holding on for dear life as we race to catch up with our noble pack.

And so it is no small relief that evening to pull into Yamashiro Onsen, a hot-springs town on the Japanese seaside. A peaceful resting spot for wayfarers since the Edo period, Yamashiro’s waters are said to ease muscle pain, skin inflammation, and digestion problems. Araya Totoan, a historic ryokan run by the same family for 18 generations, is as lovely an overnight spot as any. As I settle into my tatami-matted room and slip into a yukata robe on the way to the baths, I’m mostly looking forward to relaxing my white knuckles.

The next morning, I awake refreshed and as ready for the day’s epic twists and surprises as a bushi warrior. For Westerners, driving in Japan is an experience full of idiosyncrasies and out-and-out wonders. Tollbooth attendants wear jackets and ties with white gloves. Orange highway signs show a bowing figure to indicate deep regret for any roadwork ahead. In Shizuoka Prefecture, we hit a segment of asphalt that “sings” a traditional folk ballad as we drive over one of Japan’s grooved melody roads.

With our elegant cavalcade reunited, I can ease up on playing helmsman and take in the views. Our last full day swings through the remote Japanese Alps, where pristine villages like Hida Takayama and Narai-juku have A-framed wooden merchant houses dating back hundreds of years. At points along the way, kids wave at us with tiny welcome flags as if we are dignitaries, but they’re the ones who have it good. On a blue-sky day like this, it’s clear why Mt. Fuji, a perfect triangle rising out of the rice paddies, is considered a god of nature.

It would be indecorous of me to note that our fuel pump conked out more than a dozen times in the course of our journey; that we stopped keeping track of rally points after I missed five or six important turns; or that it was with some measure of sadness that I finally put away my mapping gear as we reached the mega-​highways of Tokyo. The point is, we make it to the Peninsula, where a red carpet lines the main driveway and a band plays us in with Dixieland jazz.

As phenomenal as it was to be on the road, I am eager to head upstairs for a proper cleanup and rest—someone jokes that the hotel’s famous soaking tubs are deep enough to park one of the cars—but on the way to returning my navigation equipment, the man in charge is waiting for me with a smile.

“You did it,” Kadoorie says, extending his hand. “You’re a regular Ferdinand Magellan.”

It’s a compliment I gladly accept, though I would have settled for 007.