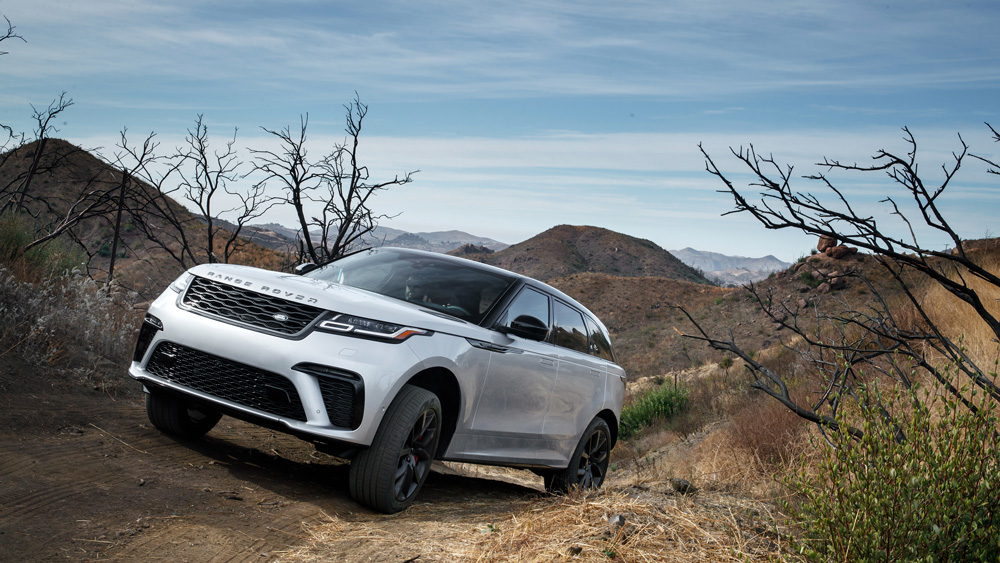 Land Rover’s long-awaited Defender reboot has already been confirmed for a starring role in the next James Bond film, No Time to Die, but it’s easy to imagine a different Rover filling in for the job. As the most potent version of Land Rover’s most stylish model, the Range Rover Velar SVAutobiography Dynamic Edition ($91,815 ) is perfectly suited to the high-paced stunts and elegant arrivals required of a 007 accessory. Let’s take this scene-by-scene.

Q is busying himself with experimental gadgets when Bond strolls into his workshop at MI6 headquarters. “James,” Q looks up, “thank you for coming—this way, please.” He leads them through a series of private corridors and elevators to an underground garage. “Your new vehicle,” Q notions. “The tank?” Bond queries. “Next to the tank,” Q corrects, tabbing a remote. From the shadows illuminate a pair of piercing LED headlights. With another press of the key fob, the Velar SVAutobiography Dynamic Edition rolls into view.

The camera slowly pans the vehicle’s exterior. Vast air intakes, dazzling 21-inch forged alloy wheels, and menacing quad exhaust ports take their turn in the spotlight. “Sharp, isn’t it?” Q grins. “Quite,” agrees Bond, “but I assume it’s more than just handsome.” Q proceeds with the highlights: a 5.0-liter supercharged V-8, zero to 60 mph in 4.3 seconds and a top speed of 170 mph.

We rejoin Bond at the helm of his new, government-issue Velar SVA. As night falls, only the snarl of exhaust can be heard through Austria’s vacant countryside. Inside the hushed cabin, we catch glimmers of knurled finishes on the gear selector and infotainment controls, aluminum shift paddles behind a sport steering wheel, and three vivid TFT displays, including a digital gauge cluster. It’s unclear whether Bond is enjoying a heated massage from the diamond-quilted Windsor leather seats, but even secret agents have needs.

Luxury is now a distant memory as 007 sprints through a hotel lobby clutching a stolen detonator. A dozen henchmen attack from all angles, but Bond pummels those in his path before crashing through a window. Dusting the remnants of shattered glass from his suit, Bond tips the valet a twenty, climbs into the Velar, and four-wheel drifts his way off the property.

But his freedom is short-lived; a team of sport bikes and an armored buggy are now in pursuit. The Velar weaves through tight cobblestone streets, narrowly avoiding (most) grocery stands and shops. A sudden stop from the Land Rover’s Brembo brakes leads two of the bikes off an unfinished bridge, but two others close the gap. Just beyond the city entrance, the Velar does a 180-dgree turn and fires its concealed rockets into the brick archways. Rubble buries the motorcycles, but the buggy blasts through the wreckage.

The 5.0-liter supercharged V-8 allows the vehicle to vault from zero to 60 mph in 4.3 seconds and reach a top speed of 170 mph.  Photo: Courtesy of Jaguar Land Rover.

Bond turns the gear selector to reverse and punches the throttle. Spotting a break in the bordering trees, 007 spins the Velar off-road and disappears into the forest. With its Terrain Response system in Auto, the Range Rover barrels through mud and grass, over rocks and ruts. Impressive for a luxury SUV, but the purpose-built buggy is unfazed—that is, until Bond charges into a deep stream. With its air suspension fully raised, the Velar churns its way across, but the buggy’s low-mounted engine immediately logs with water and dies.

Our hero makes his getaway, saving the world (and a wealthy damsel) from nefarious foes. It’s possible Bond could have done it all without the Velar SVAutobiography Dynamic Edition, but those without special training should probably just get his car.