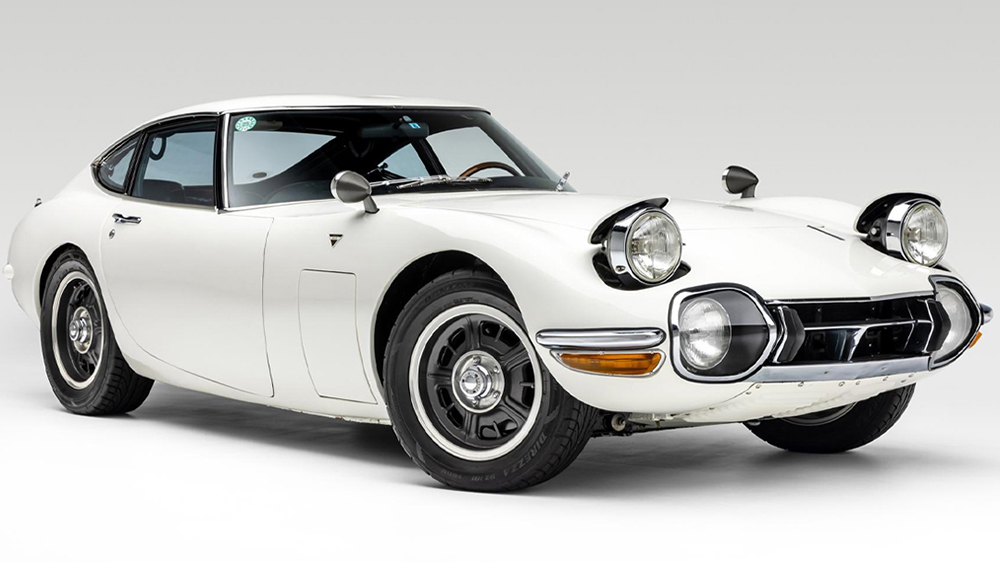 Toyota may not be the first marque that leaps to mind when people think of the auction market, but the Japanese giant is responsible for some truly important vehicles—one of which just went up for grabs.

A gorgeous white 1968 2000GT is currently up for bidding on the popular auto auction site Bring a Trailer. In addition to being in excellent condition, the fastback coupé is one of just 109 left-hand-drive examples from the sports car’s 351-unit production run, which is why bidding has already crossed the half-million-dollar mark.

The 2000GT was the result of a collaboration between Yamaha and Toyota and made its debut at the Tokyo Motor Show in 1965. The sporty grand tourer was only in production between 1967 and 1970, but it was the sort of halo car that showed what both Toyota and Japan were capable of. It was hard proof that the country’s automakers could build a car that could compete with the best from Europe and the US. Because of that and its genuine rarity, it’s become a car that collectors dream of owning.

This particular example—chassis no. MF10-10101—is from the second year of the 2000GT’s production run. Its long nose and curvaceous fenders are done up in a dazzling coat of white, while the left-hand drive configured interior is covered in black vinyl with polished wood accents. The vehicle is said to have left the production plant in Solar Red, but white suits it just fine. It rides on a set of magnesium alloy wheels that give it an even more athletic look.

Underneath its extended hood, you’ll find a 2.0-liter 3M inline-six engine with triple Mikuni-Solex carburetors. The mill is mated to a five-speed manual transmission that sends power to the rear axle and can generate a maximum of 148 hp and 131 ft lbs of torque, according to Encycarpedia. That’s about as powerful as the present-day Corolla, but it was impressive for the era. The car was originally sold to the US market, but spent time in a Japanese museum before being shipped back stateside in 2013. Because of this, it would seem it’s been used sparingly over the last 53 years, having totaled only 12,000 miles in that time. It has been regularly serviced over that period, though, and has the paperwork to prove it.

There are four more days left in the auction, so don’t be surprised if the bidding climbs steadily from the $513,000 it sat at as of press time. One look at RM Sotheby’s past auction listings shows that the car has tended to sell for between $500,000 and $1.15 million.