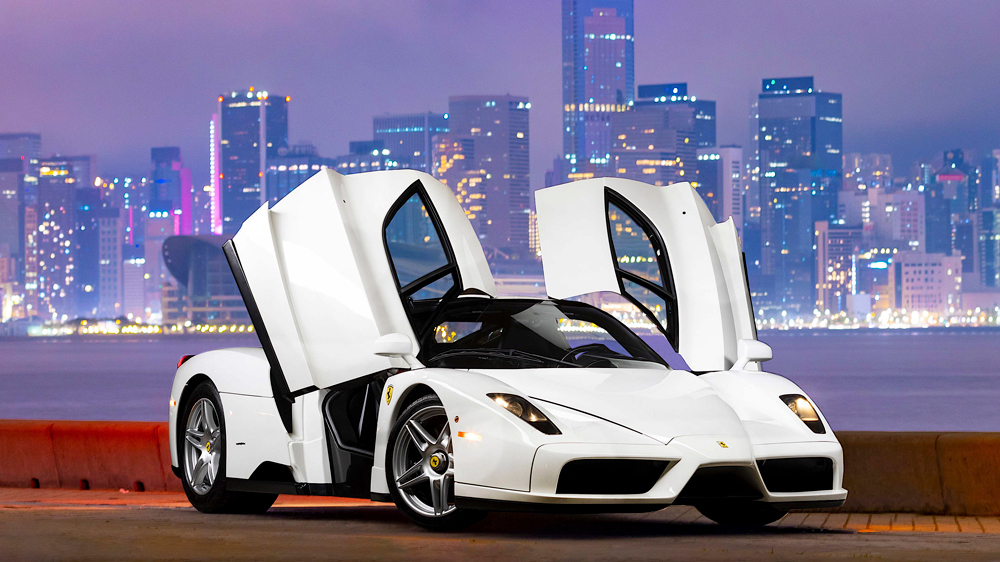 A claimed 400 examples of Ferrari’s Enzo supercar were built during its brief production life from roughly 2002 through 2004. Most were painted Rosso Corsa red, some were Nero black and a handful were retina-searing Gallo Modena yellow. But only one left the factory in icy Bianco Avus white. Now, after years of being hidden away in a private collection, that Ferrari unicorn, the “White Enzo,” is crossing the online auction block next week through RM Sotheby’s—with no reserve. Get ready to count the zeros.

“Strikingly beautiful, unspeakably rare and ready to serve as the jewel in the crown of any leading collection of modern Ferrari masterpieces, it is quite simply the best of the best,” states RM Sotheby’s in its listing.

The auction house isn’t putting an estimate as to how much the Enzo might go for, but, back in 2015, the very last Enzo built—sent to the Pope to raise money for charity—was sold by RM Sotheby’s for more than $6 million. In 2021, a black 2003 Enzo went for $3.36 million. In today’s super-heated Ferrari market, a price somewhere in the middle is perhaps a good guesstimate

The car, chassis No. 133032, was completed in May of 2003 for German-Swiss billionaire Luitpold von Finck, chairman of the Mövenpick hospitality group. He’d specified Bianco Avus paint, and trim that included a black leather interior, red for the instruments and seat belts and wider carbon-fiber bucket seats with black cloth inserts.

Official badging that denotes Bianco Avus as the color this Ferrari Enzo was painted at the factory.  RM Sotheby's

The vehicle was one of 20 Enzos described as extracampionario (special order) examples that were, no doubt begrudgingly, allowed to be painted in non-standard colors for highly favored clients. Mr. von Finck reportedly kept the car in Switzerland, mostly in the window of a friend’s car-dealership showroom, before selling it to a Hong Kong collector in 2011. Unable to be officially registered in Hong Kong because of having its steering wheel on the left, the car was tucked away as part of the owner’s large automotive stable. Its lack of use is shown by the current odometer reading of just 9,600 km (5,965 miles).

According to RM Sotheby’s, the Enzo has been fully authenticated through Maranello’s Ferrari Classiche program, complete with the coveted Ferrari Red Book certifying and detailing the car’s complete build process. It’s also just had a full annual service. Interestingly, in the lead up to the auction, the Enzo had been offered for sale by one of Hong Kong’s exotic car dealers with a price that was available on request. It seems there were no takers.

Named after il Commendatore himself, founder Enzo Ferrari, the Enzo was the successor to the legendary F40 and, later, F50. Featuring a lightweight carbon-fiber monocoque chassis, the car derived its power from a mid-mounted 6.0-liter V-12 cranking out a staggering-for-the-time 651 hp and 485 ft lbs of torque. This allowed the Enzo to go from zero to 60 mph in 3.6 seconds and reach a top speed of 217 mph, making it one of the quickest supercars of its day. The auction kicks off at 4 a.m. ET on June 29, ending promptly at Noon ET on June 30.