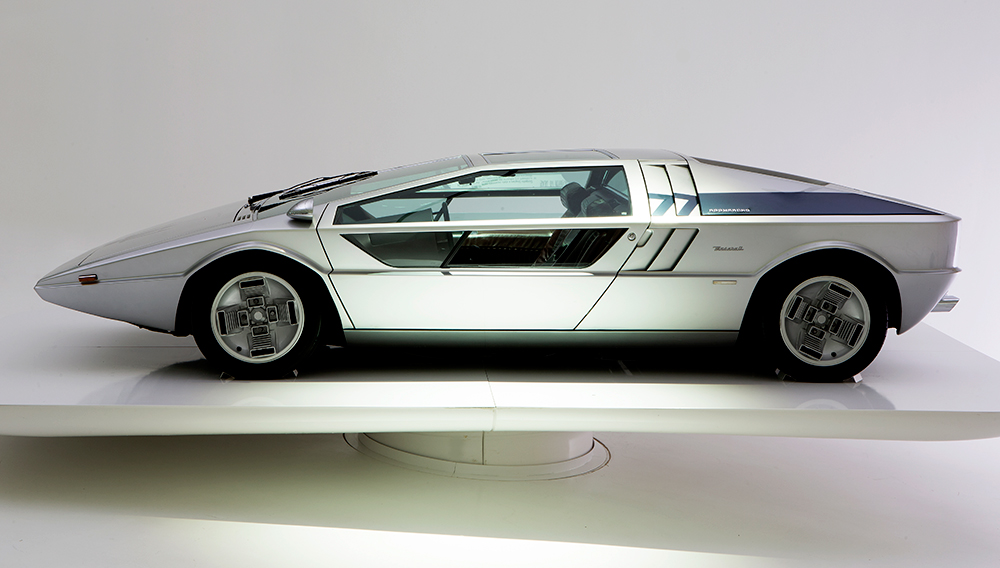 During the upcoming Chantilly Arts & Elegance Richard Mille, Bonhams will present the first auction of the concours. The Bonhams Chantilly Sale, on Saturday, September 5, 2015, will take place in the Grand Stables of the Château de Chantilly. The select group of 31 lots includes 29 automobiles, some of which were presented on the concours lawn at last year’s Chantilly Arts & Elegance Richard Mille. Most remarkable—and surely coveted by aficionados of the respective marques—are a Maserati and Bugatti that hold significant historic significance, as well as being simply exquisite examples of 1970s and 1950s high design, respectively.

Of greatest rarity is the auction’s star car, Lot 11. The 1972 Maserati Boomerang (video above) is perhaps the masterpiece of the Italian designer Giorgetto Giugiaro and his ItalDesign firm, who created great production Maserati automobiles including the iconic Ghibli, Bora, Merak, and Series III Quattroporte. The Boomerang was a sensation when unveiled at the Turin Motor Show in 1971, and was a springboard for the success of Giugiaro’s young company. Powered by Maserati’s 4.7-liter, four-cam, V-8 engine, the Boomerang defined the shape of things to come and prefigured epoch designs like the Lotus Esprit and the angles, flat planes, and sharp edges that remain hallmarks of the 1970s design vocabulary. The fact that this significant show car actually runs—and runs well—adds a remarkable and welcome facet to the equation, and makes the Boomerang one of the finest pieces of rolling sculpture in automotive history. (Presale estimate available from Bonhams upon request.)

Lot 23 is a 1950 Bugatti Type 101C Coupé Antem, a car that signaled the end of the original Bugatti production. Derived from the prewar Type 57 chassis, it was powered by Bugatti’s 3.3-liter, twin-cam, straight-8 engine, the staple of Bugatti racing efforts from its inception in 1934. While the car was outdated by the newer postwar designs of other marques, Bugatti made updates where it could and offered two types, the more potent being the C (for “compressor”) supercharged version. A total of six production cars and one prototype were made, and this, with body by Antem, was a rather stoic design and the most attractive of the seven, all of which survive. A fabulous rarity, the Bugatti is estimated at $1.7 million to $2 million, plus commission. (bonhams.com)