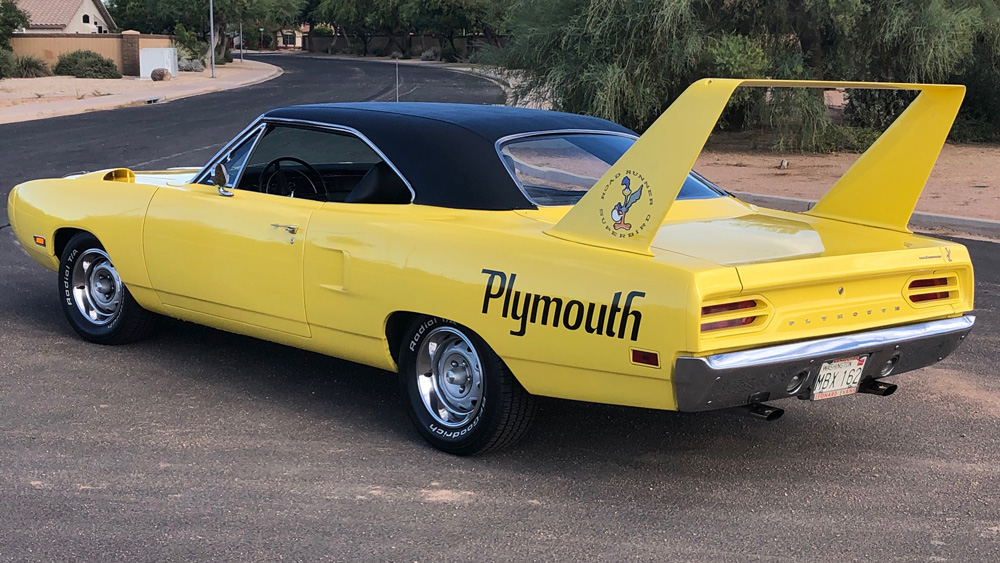 Back in 1970, the Plymouth Superbird was built to do one thing, and one thing only; dominate NASCAR racing. With the legendary Richard Petty behind the wheel, the ‘Bird won 18 races that year—most of them at speeds over 200 mph—before NASCAR outlawed the car the next season.

What sets this vehicle apart is that it’s one of only 308 equipped with a thundering 440 cubic-inch (7.2-liter) Super Commando Six Barrel V-8 engine and a four-speed stick-shift.

While not as potent as the range-topping, high-output 426 Hemi version, the 440 cranked out a muscular 390 hp—just 35 horses shy of the asphalt-peeling 426. The power train is enough to punch the Superbird to 60 mph from a standstill in around 5.5 seconds and on to a top speed of 150 mph.

Restored 13 years ago by a specialist in Washington State, this hugely collectible example is ‘numbers-matching’ and comes with its original VIN, fender and body tags, along with those must-have, pizza-sized Road Runner decals on the sides of that towering rear wing.

Inside, the fully restored interior is all period-correct black vinyl with a too-cool wooden pistol-grip shifter and trademark ‘Beep! Beep!’ horn.

The period-correct interior with a wooden pistol-grip shifter.  Photo: Courtesy of Russo and Steele.

That’s a far cry from 1970, when a brand new Superbird would have set you back around $4,776. The car’s polarizing styling, however, turned off many customers and a majority of the cars were left sitting in dealer lots unsold, often for years.

The Russo and Steele collector car auction runs from January 15 through 19 in Scottsdale, Ariz. The Superbird is scheduled to cross the block on Saturday the 18th.