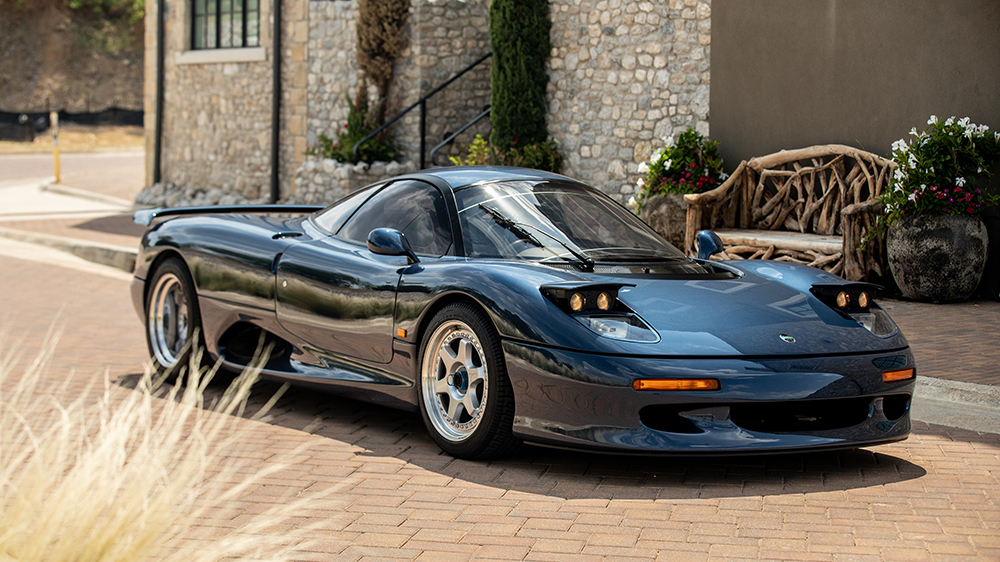 An ultra-exclusive road car based on one of Jaguar’s greatest racers is about to go up for grabs.

RM Sotheby’s will auction off a 1991 XJR-15 as part of its upcoming Monterey Car Week sales slate. Not only is the stunning speed machine one of the best looking supercars of the 1990s, it’s also one of only 27 examples that were street legal.

At the dawn of the 1990s, Jaguar was back on top of the endurance racing world. The British marque had been a winner’s circle fixture during the ‘50s, but had gone decades without tasting victory at the 24 Hours of Le Mans. A Jag finally reclaimed the checkered flag in 1988 and repeated the feat in 1990. Those races were won by two different (but related) cars, the XJR-9 and XJR-12, both of which were built by Tom Wilkenshaw Racing. The builder was able to convince the automaker that there would be interest in a road car inspired by the winning racers. This would end up being the XJR-15, which featured a chassis based on the one found in the XJR-9, a new futuristic design and was the first street-legal car made primarily of carbon fiber.

Jaguar Sport—a joint venture between the marque and Tom Wilkenshaw Racing—would build just 50 XJR-15s between 1990 and 1992. This particular example, chassis no. 018, was one of the street-legal models. The body—which was designed Peter Stevens, who was also responsible for the McLaren F1—is finished in a rich coat of metallic dark blue, which helps accentuate its elegant lines. The two-person cabin is spartan, but also equipped with two comfortable leather racing seats. Although the car is over 30 years old, it was restored to factory condition in 2015 and looks brand new.

The XJR-15 is as capable as it is good looking. It is powered by a mid-mounted 5.3-liter V-12 almost identical to the one found in the XJR-9. That mill was mighty enough to push the vehicle to a top speed of 215 mph when it was brand new. One quirk about this example—which is known as the “Japan Study Car” because it was used for aerodynamic and other testing—is that it’s equipped with a five-speed transaxle gearbox, instead of the race-tuned, six-speed gearbox found in other examples. It has only 1,000 miles of use, so it should drive pretty well too.

Interested in adding this historically important supercar to your garage? RM Sotheby’s expects the car to sell for between $1.2 million and $1.4 million when it hits the block on August 20. And considering the condition it’s in, that might just be a bargain.