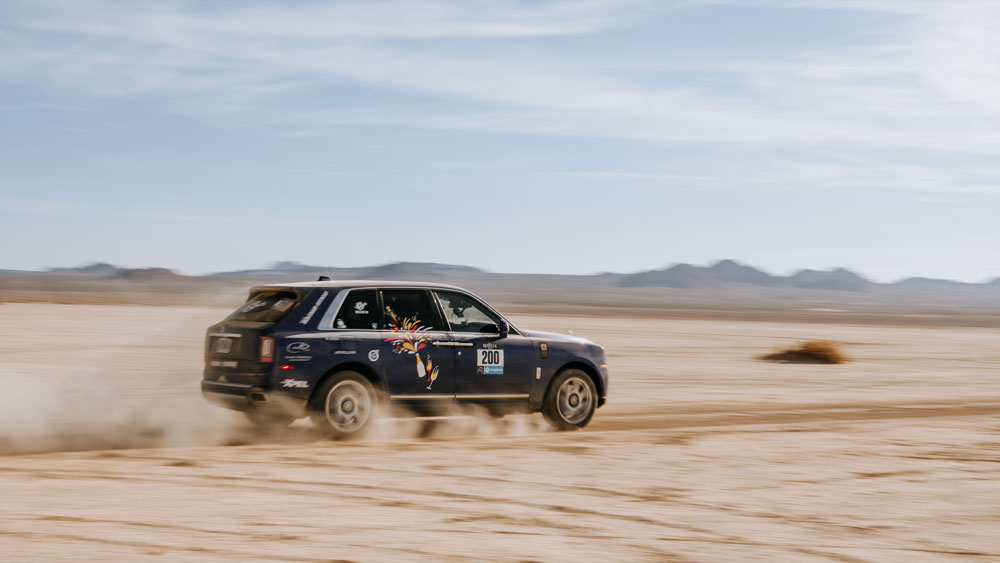 With the 2020 Rebelle Rally currently underway, I’m reminded of my time covering last year’s race. Just two days into the eight-day contest of 2019, with wheels stuck in the sand, it looked like the Rolls-Royce was a poor choice, at least for an off-road race from Lake Tahoe to the Mexican border. Behind the wheel, driver Emme Hall floored it while navigator Rebecca Donaghe eyed the Max Trax positioned under the wheels of their Rolls-Royce Cullinan, ready to haul the 50-plus pounds of traction device once they worked the vehicle free. But when finally unstuck, Hall and Doneghe’s machine still barely inched through the Amargosa Dunes, and the two figured their race was over—as was their bet that a car most associated with Grey Poupon mustard commercials could win an off-road competition.

But no one was quitting yet. After limping to the next checkpoint, Hall, an automotive journalist, realized that the car wasn’t broken; it was simply inching along because one of the doors was cracked open. Once she fixed it, the blue SUV, festive in team decals and the hashtag “#whoneedsroads,” motored easily across the dirt. The car they’d named Eleanor was still in the race. “She’s like most women, where most people will underestimate her,” says Hall of the Cullinan. “And then she’ll surprise them.” Six days later, the team held the trophy as 2019 Rebelle Rally winners.

Launched in the spring of 2018, the Rolls-Royce Cullinan is a blend of two disparate worlds—the realm of leather-clad automotive luxury and the rough-and-ready sphere of SUVs that actually venture off road. The Rebelle Rally isn’t much older, launched in 2016 as a navigational race for teams of women, a kind of distaff version of the famed Dakar Rally.

This week marks the fifth running of the race. The contest, brainchild of race director Emily Miller, sends teams—armed only with map and compass—across salt flats, California and Nevada deserts, swaths of rock in the Southwest, and miles of back roads. Most entrants are car enthusiasts, but all are amateurs when it comes to racing. Hall and Donaghe, Californians both, have driven together every year—but never before in a Rolls.

In a body that shares the same aluminum spaceframe platform as the British marque’s new Ghost and flagship Phantom models, the Cullinan also has an air suspension meant to deliver the same smooth-as-butter ride even off the pavement. And to producer Donaghe, it’s not such a stretch to picture the car on the dirt. “The whole history of the Rolls was that they took them out hunting, they went fishing. It should be able to go anywhere,” she says. “Has it become something that feels more precious than that? Yes. But the history is there.”

The eight-day race runs through salt flats, the deserts of California and Nevada, swaths of Southwest rock, and miles of backroads.  Photo by Richard Giordano, courtesy of Rolls-Royce Motor Cars Limited.

It was Hall who asked the esteemed automaker if they could borrow a brand-new Cullinan for the race, and, to her surprise, the answer was yes. Victors in the 4×4 category the previous year, she and Donaghe were intrigued by the smaller crossover division, even if it was a little nerve-wracking to enter in a borrowed vehicle that carries a starting price of $325,000.

Hall admits she took it easy at first: “I don’t want to be a pansy, but I don’t want to be an idiot either with an expensive loaner,” she says. The goal was “JFF: Just [expletive] Finish.” But before the end of the first day, she realized that the Cullinan had the power to overcome anything.

Admittedly, the car looked a bit out of place among all the other pickup trucks, Subaru Outbacks, and Jeeps entered in the Rebelle. But the team leaned into the incongruity, plastering the car with wine, diamond and cigar sponsors, and calling themselves Team Jeeves after the famed butler. The pair confesses that they quickly took to using the built-in seat massagers during the grueling rally, even as Eleanor was doing “real King of the Hammers stuff,” according to Hall—i.e. the rock crawling usually reserved for burly vehicles with hemi engines and 40-inch tires. “It feels like you’re driving on a cloud,” she notes.

Rebelle teams earn points by hitting checkpoints throughout each day of competition, some marked by signage but many just blank spots in the wilderness. Despite their trouble on Day 2, Team Jeeves held the lead of the Crossover Class and won for the second year in a row. This week, they entered the 2020 Rebelle Rally in a new electric challenger—the Rivian R1T.

The winning duo are competing this year in the electric Rivian R1T.  Photo by Nicole Dreon, courtesy of Rolls-Royce Motor Cars Limited.

Even while racing to first in the Rolls, Hall and Donaghe never forgot they were in a car synonymous with luxury; another hashtag, on the front grill, read “#PardonMe.” Whenever anyone came up to ask, “Pardon me, do you have any Grey Poupon?” as a joke, they would hand out mustard packets. Says Hall, “If you ask the magic question, you get a little gift. We have to be able to say, ‘But of course!’” The 2020 edition of the race started last Thursday and ends October 17.