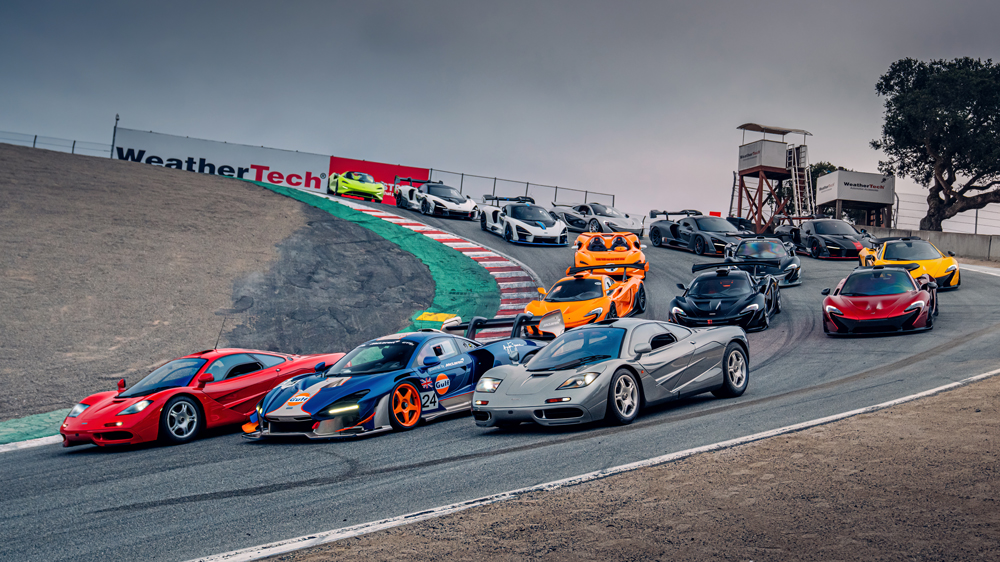 The screaming wail would put any banshee to shame as it reached a crescendo just before turn No. 2 at WeatherTech Raceway Laguna Seca in Carmel Valley, Calif. For those in the two-story viewing pavilion, the shrill cacophony came into view in the form of a 2013 McLaren MP4/28A Formula 1 race car.

More impressive than the machine, however, was the man behind the wheel. Deftly harnessing the hybrid ferocity was none other than Hall of Fame driver Mario Andretti at the age of 82 years old. It was a bucket-list moment for any motorsport fan, but one the likes of which have come to be expected at the three-day exhibition of speed known as the Velocity Invitational.

The brainchild of Jeff O’Neill, a wine-industry magnate and gentleman racer, what’s now the Velocity Invitational began in 2019 as the Sonoma Speed Festival at the Sonoma Speedway, about 150 miles north. It emerged from a year’s hiatus due to the pandemic with a new name and circuit, yet the mission of the historic-racing extravaganza has remained on track.

“It’s pretty simple,” says O’Neill. “My Dad loved cars and we used to go to all the SCCA [Sports Car Club of America] races at Laguna Seca and Sonoma, and I got the bug.” Later, as an adult, he realized that the regional race experience had quite a bit of room for improvement. “You couldn’t bring your family because there was no food, no place to sit, there was not a nice ambiance,” says O’Neill, who wanted to create “an environment where you can bring young kids to learn about cars and learn about the history.”

From October 14 through 16, that history was brought back full-throttle on the 2.238-mile circuit—dating back to 1957—as 10 groups of competition cars, divided by year and model class, battled through the track’s 11 turns and 180 feet of elevation change. The gauntlet included the infamous combination of corners on the backside known as “the Corkscrew,” where drivers plunge 109 feet in short order.

The machines themselves encompassed most every era of motorsport and ranged from a 1928 Bugatti T-37A, piloted by Luca Maciucescu of Santa Fe, N.M., to a 2012 Porsche GT3 Cup car with Ranson Webster of Reno, Nev., in the cockpit. The categories ran the gamut between Grand Prix and Voiturette (no more than 1,500 cc displacement) Racing Cars spanning 1927 through 1949 to IMSA/ALMS (International Motor Sport Association/American Le Mans Series) GT, LMGT and Production Cars circa 1995 through 2012.

“For me, the real genesis is the evolution of technology,” says O’Neill, who explains how it’s a mistake to underestimate the grit and gravitas of many bygone models from early last century. “A lot of people might think it’s just an old car from 1938,” he says, as an example. “But it has magnesium, is supercharged and runs on methanol—so it was the supercar of 1938.”

O’Neill was jumping in and out of iconic sheet metal all weekend, most notably his own 1960 Maserati Birdcage and a good friend’s 1962 Ferrari 250 GTO. In describing the latter, O’Neill says: “The minute you turn the engine on, that vehicle just transports you to a different place. The torque, the noise from the 12 cylinders, the spectacular gearbox—there’s a reason why there are only 36 and why they’re so valuable.”

Yet the weekend wasn’t only about the dream machines of yesteryear, as the paddock area extended to include the latest hypercars from Czinger, Hennessey, McLaren and Zenvo, along with a pop-up showroom for Polestar and its growing electric lineup. And there were even hot laps to be had in McLaren’s new hybrid Artura and the battery-powered Lucid Air, a model which recently won the Hillclimb Timed Shootout for the production-car category at this year’s Goodwood Festival of Speed. A select few even took the passenger seat as Tanner Foust flew them around the track in the 1996 McLaren F1 GT12R from that year’s 24 Hours of Le Mans.

For the young ones, a host of games and activities kept them from idling, while those of age could enter the Sip and Savor Pavilion. There, regional catering specialists sated appetites while wineries such as Rombauer Vineyard, Robert Hall, Vina Robles and NFL-great Charles Woodson’s Intercept label provided ample tasting opportunities. And for the racers and their families, a dedicated Driver’s Lounge—with an example of Czinger’s 21C V Max hypercar as centerpiece—served breakfast, lunch and plenty of hydration.

A crowd favorite was provided by the Petersen Automotive Museum, who brought Formula 1 cars from the Juan Gonzalez Collection. The assemblage on display included Lewis Hamilton’s 2009 McLaren MP4-24 and a Ferrari F399 campaigned by Michael Schumacher.

There were also a few notable names that lined up on Velocity’s starting grid, including former Formula 1 Champion Mika Häkkinen, IndyCar’s Pato O’Ward and, of course, the aforementioned master himself, Mario Andretti. Also testing their mettle were Zak Brown, CEO of McLaren Racing, Rob Walton of Walmart fame, racer and restorer Bruce Canepa and television and radio personality Adam Carolla.

“I raced in Group 8 [the under 2-liter Trans-Am, SCCA B-Sedan and C-Sedan class from 1966 through 1979], and it was nice to get the gang back together,” Carolla tells Robb Report. “People made it from all parts of the country, set up and ran strong, fast and clean.”

Although a veteran when it comes to historic racing, Carolla was competing in the Velocity Invitational for the first time, doing so in a 1969 Datsun 510. It’s a car he refers to as “a little box that, if driven properly, will give you pretty much the same exact lap time as a Boss Mustang with 550 hp.” His highlight of the weekend? “For me, the best part is the start of the race,” says Carolla, “when we grid up and when the pace car pulls off . . . I like that.” Asked if he will participate in next year’s edition, Carolla’s response probably echoes that of every other participant and attendee alike. “Oh yeah, certainly,” he says, “it’s going up on the calendar.”

Click here to see more photos from the 2022 Velocity Invitational.