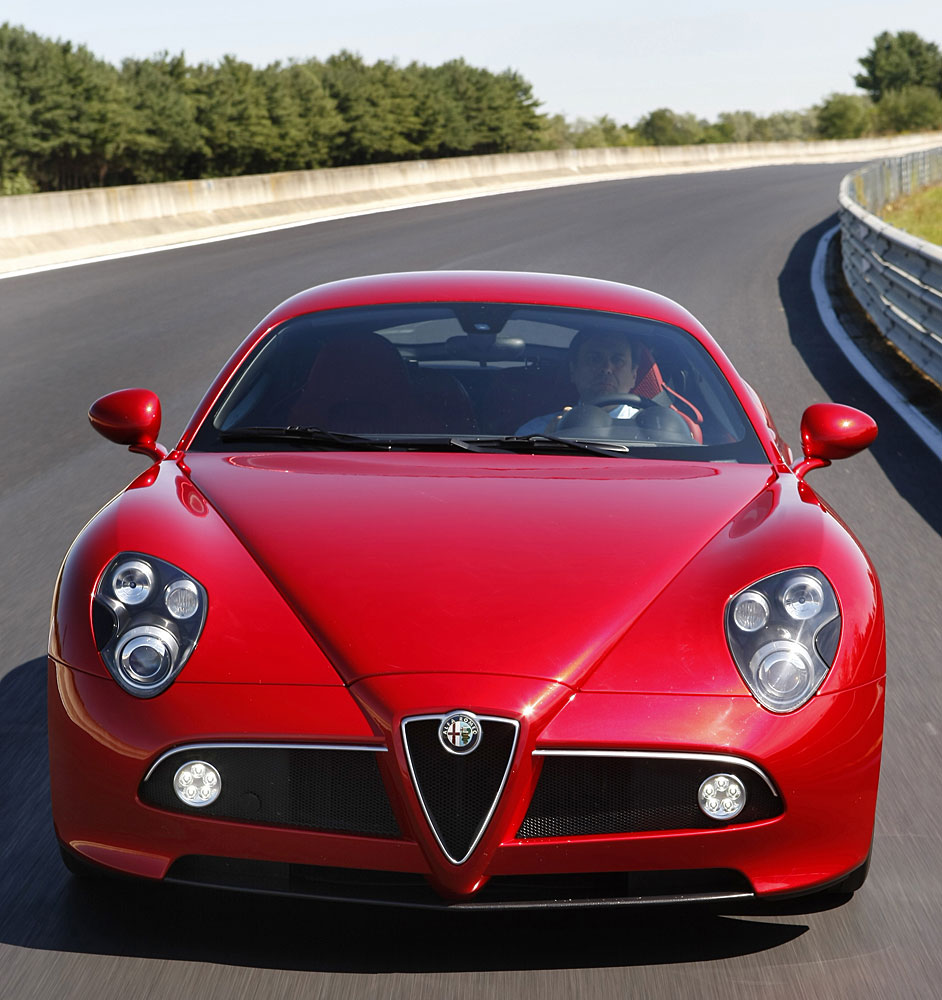 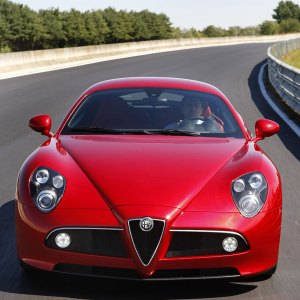 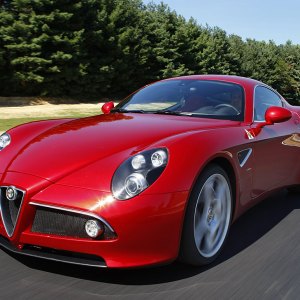 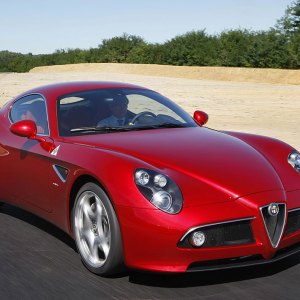 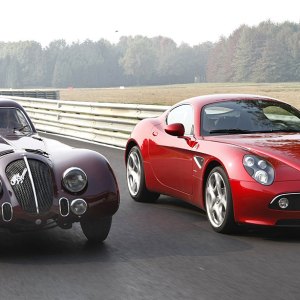 “You can disable ESP,” Alfa Romeo engineer Domenico Martino says of the 8C Competizione’s electronic stability system, “but we don’t recommend.” Especially not in these conditions. It is a rainy, winter afternoon at Circuito di Balocco, the test track near Turin, Italy, home of Alfa Romeo’s parent company, Fiat, and Martino is providing a crash course in driving the new coupe to its limits. Or rather, he is offering a few tips on how not to crash the 8C Competizione.

This drive promises to be a humbling experience: My passenger, Martino, is the person who fine-tuned the car’s chassis and handling dynamics. But because of the 8C’s limited availability, this also might be my only opportunity to pilot the coupe. So I swallow my pride and listen to Martino’s instructions.

The competition to acquire a Competizione should be fierce. More than 1,000 would-be buyers placed orders for the 8C within moments of its debut, as a concept model, at the 2003 Frankfurt Auto Show. However, according to company officials, Alfa Romeo will build only 500 of the vehicles—deliveries begin this spring—and send just 84 to the United States, selling them for about $250,000 each through Fiat’s existing network of Maserati dealers. (Alfa Romeo offered one of the America-bound 8Cs in Robb Report’s most recent Ultimate Gift Guide [December 2007, page 150]. The $300,000 package included high-speed-driving lessons on the Balocco track.)

I press the starter button and rouse the V-8; the car’s alphanumeric forename refers to its V-shaped òtto cilindri engine. Martino then points to another button on the center console, one labeled Sport. “Push here for the music,” he says.

When you activate Sport mode, two valves in the tailpipes open, dropping the already deep, raspy exhaust note to an even deeper, raspier burble. Sport mode also halves the sequential manual transmission’s robotic shift interval, from four-tenths of a second to two-tenths; sharpens the engine’s responsiveness to the gas pedal; and slightly loosens the electronic reins to allow for more oversteer.

Before I can become familiar with the finer points of Sport mode, however, I first must leave the track’s infield. When I nudge the accelerator, the electric hand brake releases automatically, and the car begins to crawl. At parking-lot speeds in both reverse and first gear, the transmission balks and fidgets like a racehorse stepping into the starting gate. I switch the transmission from automatic to the paddle-operated manual model, and then I turn on the music.

The workers at Balocco stop and stare as the 8C rolls past. They might be jaded, but apparently even they find it difficult not to admire the vehicle’s curves, which recall such 1960s-era Alfas as the Type 33 Stradale and the TZ. The car’s design is thoroughly modern, but its triangular front grille, fender air vents, triple-aspect headlights, bobbed rear end, and big, circular taillights are signature styling traits that render the 8C instantly recognizable as an Alfa Romeo.

Credit for the design goes to Wolfgang Egger, who recently left Alfa to become Audi’s head of design. Former Ferrari and current Fiat design chief Frank Stephenson, the man responsible for the modern incarnation of the Mini Cooper, applauds the achievement. “As designers, part of our job is to push the engineers to be innovative,” Stephenson says, “and to the Fiat engineers’ credit, they did not compromise [Egger’s] design.”

The 8C’s interior contains carbon fiber seats, crosshatch leather trim on the door panels that resembles the weavings on a picnic basket, and a Schedoni leather trunk case that holds a few bottles of wine, and, if you pack carefully, a salami and a wedge of cheese. An 11-pound piece of aluminum, which was carved from a 230-pound solid block, frames the center console. “Don’t ask me what we did with the rest of the aluminum,” Martino says with a laugh.

On the car’s exterior, specifically the front fenders, optional quadrifòglios—four-leaf clovers—in white triangles serve as reminders of Alfa’s racing heritage. The emblem originates from 1923, when Alfa Romeo driver Ugo Sivocci presented a four-leaf clover, as a token of good luck, to his team prior to that year’s Targa Florio endurance race. After Sivocci, driving car number 13, won the race and gave Alfa Romeo its first victory in the competition, the company adopted the symbol.

With rain covering the Balocco track, I might need a little luck myself to avoid a disaster while I test the 8C’s Launch Control. Actually, Whiplash Inducer would be a more accurate name for the feature. It basically engages the clutch to the flywheel and does so “in a very brutal way,” Martino warns, as I mash the accelerator to the floor. The rear tires spin on the wet pavement until they suddenly gain traction and seemingly catapult us down the long straightaway that leads onto the circuit.

The Launch Control exhibition displays Sport mode’s primary virtue of shift speed. The tachometer needle rises quickly to its 7,500 rpm redline with abrupt, 200-millisecond gear changes that somehow feel smooth, despite the racket that emanates from beneath the hood as the engine threatens to spool itself into oblivion.

The 4.7-liter engine is built at Ferrari’s Modena factory and derived from the Maserati GranTurismo’s 4.2-liter V-8. It produces 444 hp and 354 ft lbs of torque and propels the 8C from zero to 60 mph in 4.2 seconds and to a top speed, claims Alfa Romeo, of 182 mph; we will not challenge the veracity of that claim on this day, not in the rain.

The vehicle’s engine revs to 4,000 rpm before really hitting its stride; peak torque arrives just shy of 5,000 rpm. Decibels rip through the cabin; the car’s carbon fiber body proves to be as effective as facial tissue at muting noise. The 8C Competizione might not be a racecar—it is more comfortable than it is sporty—but it certainly sounds like one. In fact, you can exploit the car’s power and carry speed through turns by adjusting the accelerator to maintain a steady concerto of engine revs and tire roar.

If you enter a corner too fast, the 8C will understeer, but it smoothly corrects its course as you ease off the throttle. Apply power late and hard out of a bend, and the rear wheels will break free—though not for long. In Normal mode, the stability control quickly comes to the rescue; in Sport mode, help arrives only a little later. Giant slotted Brembo brakes, with six-piston calipers up front, will slow the car in a hurry. The 8C’s steering errs on the side of comfort rather than offering razor-edge, supercar sportiness. Martino acknowledges that the 8C “is more polite, not so extreme, like a Ferrari F430 or a Lamborghini Gallardo.”

Alfa Romeo has been absent from the U.S. market since the mid-1990s, when the Pininfarina-designed 164 sedan failed to capture hearts here. Sergio Marchionne, CEO of Fiat, has openly discussed Stateside sales goals of 20,000 vehicles per year for Alfa Romeo, indicating that more plentifully produced midsize sedans, along with 2+2 Brera coupes and Spiders, may soon cross the Atlantic. But no other company official has confirmed those plans. So the 8C Competizione could be just a tease for America’s Alfa Romeo enthusiasts, or it could represent the advent of Alfa’s American renaissance.