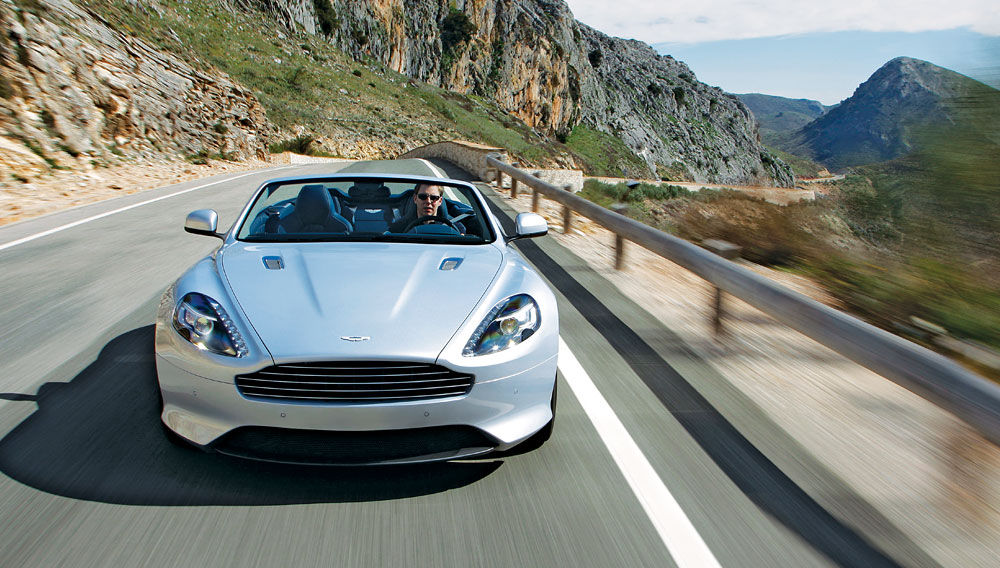 Auto enthusiasts will argue endlessly about whether a car is purer in its hardtop or soft-top iterations. Some say cutting the roof off any Porsche 911 is a scar on the car’s iconic racing roots. Others remain convinced that there’s simply no point cruising in a Rolls-Royce unless you can look up at sunny skies. But there’s no debating that for automakers, ragtops represent the stylish zenith of their craft—steel-and-glass works of art that drive customers into showrooms and onto websites, filling their heads with visions of windswept motoring.

America has long been in love with the convertible, though that romance ebbed somewhat in the gas-crunched ’70s. The arrival in the late ’80s of the Miata, that mini-mite from Mazda, did much to reignite the passion. Since then, nearly every manufacturer has spawned a ’vert, thanks in part to engineering advances that have turned once downright scary driving experiences—cars’ bodies shuddering during hard cornering—into flex-free rides that no longer elicit coupe envy. That’s certainly the case with our exotic convertible quartet, each of which artfully employs cutting-edge design to satisfy the century-old desire to go unabashedly topless.

Just when you thought it was safe to make that tough decision between the Aston Martin (www.astonmartin.com) DB9 and the brand’s borderline-brutal DBS, the folks from Newport Pagnell added another option to the mix. Sitting smack between those two machines is the company’s new Virage, which comes in both coupe and convertible (the Volante) form. Just how perfectly this car splits the difference between the two models is exemplified by the 490 hp emanating from its massive six-liter, 12-cylinder engine. The DB9 offers 470 hp, while the race-tuned DBS rings in at—you guessed it—510.

The key ingredients in Aston’s Virage Volante recipe are familiar to lovers of the marque. Twin exhausts produce a sonorous growl, while the car’s all-aluminum architecture is shrouded by a wide, dramatic wedge of a body that hugs the pavement. The front fascia has hints of the company’s one-off One-77 project, but otherwise the overall look doesn’t represent a departure from Aston’s post-DB7 form, which is a good thing; these shapes continue to be among the most pleasing on the road today.

Once you gain entry into the Virage Volante ($224,995), which—as with the coupe—comes courtesy of the marque’s signature “swan swing” doors, the environment is as elegant as its engine is overwhelming. Seven varieties of leather, sourced from a company called Bridge of Weir, line the car’s opulent interior. The switchgear is pure boardroom fare—a twinkling array of glass and polished metals. And when the top drops, all this goodness remains solidly in place. Using lessons from its previous Volante models, the engineers have employed a solidly mounted rear subframe as well as front and rear sheer panels to ensure structural rigidity despite the lack of a roof.

“The Virage Volante is the next level of evolution of our VH architecture strategy, and it does everything with the perfection that you would expect from a sports car today,” says Ulrich Bez, CEO of Aston Martin. “It is the perfect balance of opposites.”

The Audi R8 coupe’s prowess as a curve-carver aside, many enthusiasts felt it looked too much like a squashed Audi TT, certainly so for a car costing twice as much. Whatever your opinion of the R8’s design elements, the convertible variant instantly nixes that argument. By slicing off the bubble top, the R8 Spyder ($127,700) in many ways becomes the dagger of a car that it was always meant to be.

In its convertible form, the R8 evokes the styling of its rakish competition from both Germany and Italy; it’s a true exotic that merits consideration from buyers who once discounted Audi (www.audi.com) when it came to rarefied two-seaters. What’s more, Audi designers lowered the car a fraction of an inch and deleted its controversial side slash, both of which—combined with massive 19-inch wheels—conspire to give the car a much more horizontal bearing. More than ever, the R8’s massive side gills really look like they mean business.

“We incorporated the slash into the coupe to try and balance out the car’s many horizontal lines, but we just didn’t have that option with the Spyder,” says Mark Fruechtnicht, product manager for the R8. “But we also wanted some differentiation between the coupe and convertible, and this is one great way to get that. In this way, the Spyder really emerges as a stand-alone design.”

Fruechtnicht adds that a lot of engineering time went into ridding the Spyder of a pet peeve plaguing many convertible drivers: the bubble effect that many ragtops get when the car is at speed. “Our top will stay flat, adding to the dramatic look of the car on the road,” he says.

Driving the R8 was always a thrill, thanks to the vehicle’s slot-car road grip and impeccable steering. None of that is compromised by this open-topped version, due to considerable engineering tweaks. The aluminum space frame chassis, beefed up to accommodate the deleted roof, weighs a scant 13 pounds more than the coupe’s. The fabric roof rings in at just 93 pounds, and the doors and hood benefit from the weight-saving properties of aluminum. The rear seats disappear in the R8 convertible, also saving weight, but that’s no big loss, considering the seats in the coupe barely were large enough to accommodate small children.

But the sum of all of these well-thought-out parts is what matters. And in the driving department, the Audi R8 convertible delivers. With the company’s fabled quattro all-wheel-drive system mated to a potent V-10, this is one car that may cause you to change your itinerary on the fly, come rain or shine.

Bentleys have a bit of a Dr. Jekyll and Mr. Hyde thing going on—fitting, given their British provenance. On the one hand, the marque has always been synonymous with posh elegance, with its forests of hand-polished wood and barnfuls of leather. On the other, the flying Bentley Boy racers of the 1920s made sure these powerful cars always would be taken seriously as track demons.

The Bentley Continental Supersports coupe was all Mr. Hyde, a seething cocoon of a car that eliminated rear seats in favor of a brace that spanned the space behind driver and passenger, both of whom were strapped into rigid racing seats. Under the bonnet sat a wonderfully obscene 621 hp 12-cylinder that hit 60 mph in 3.7 seconds. So what’s particularly intriguing about the new convertible variant ($284,400) of the Supersports is that you get back the rear seats but lose none of the performance. That point was hammered home recently when a Supersports convertible set a new world speed record on ice, screaming across the Baltic Sea at 205 mph. If you want to cruise the Croisette—that fabled look-at-me road by the sea in Cannes, France—the Supersports will oblige; but clearly it has something else on the brain.

“We made the Supersports coupe as a way to give our customers a car that met all their performance expectations as well as their concerns about the environment, thanks to its ability to run on ethanol as well as regular gasoline,” says Christophe Georges, president and COO of Bentley’s (www.bentleymotors.com) North American division, a key post considering that nearly 70 percent of all Supersports convertibles will be sold on U.S. soil. “The convertible version of this coupe was just logical.”

Georges says that Bentley’s development of the Continental GTC convertible laid the structural groundwork for this machine, which he feels looks best in four-seater form. “This is a large car, not a roadster in any way,” says Georges. “Making sure it had places for four people was a way to ensure that it retained its proper proportions.”

Anyone who has spent time in a Supersports coupe will tell you that it is no plush GT, with Alcantara replacing leather on the stitched seats and plenty of carbon fiber to get the high-tech point across. The convertible version makes the same purposeful statement, which includes all-wheel drive and carbon-ceramic brakes. However, should that leave you still wanting more, there’s also a limited-edition version of this Winged B drop-top called the ISR, which adds a few more ponies and some race-inspired touches to the body and wheels. The Bentley Boys would be proud, indeed.

Maserati already had a stylistic hit on its Modenese hands with the GranTurismo Convertible, which coupled the devastating snout of the GranTurismo coupe with open-air fun. That beguiling front end alone likely resulted in countless sales, thanks to a massive oval grille inset with Poseidon’s trident—a symbol that hearkened to epic Maserati racers past, including the legendary 1960 Tipo 61 Birdcage.

So why mess with success? Well, the folks at Maserati (www.maserati.com) were convinced they could toughen up the GranTurismo cab even more. Behold, the recently introduced GranTurismo Convertible Sport ($136,300), which, from a racing history standpoint, makes an immediate statement with the arrival of a new color, Rosso Triomfale (“triumphant red”), an ode to Juan Manuel Fangio and his winning red Maserati ways of the 1950s. The addition of black touches to the famed grille and headlight surrounds may well be considered a dash of wicked black mascara on an already fetching model. Of course, the icing on this cake is the ability to share it with three other passengers who don’t mind getting their ’dos tussled by the wind.

However, the new Sport isn’t all about appearances. Behind the massive wheels are drilled and slotted brakes, while the 6-speed paddle-shift transmission gets the MC Auto Shift treatment for faster gear changes. Other software and hardware upgrades include a slightly tweaked 4.7-liter V-8, which provides 444 hp; a new Friction Reduction Program that helps improve the engine’s torque curve while also providing a 6 percent reduction in fuel consumption; and the oddly named Skyhook active suspension system that helps switch the ride from Fangio-precise to forgetaboutit-cruising.

“The intense customer interest in a new convertible, especially a more sport-oriented offering, is what led to this car,” says Robert Allan, director of product planning for Maserati North America. “From the changes to the standard adaptive Sport Skyhook suspension, to the MC Shift automatic with rev-matched downshifting heard via the sport exhaust system, to the major exterior changes, the GT Convertible Sport offers the sharpest performance-oriented convertible for the performance driver.”