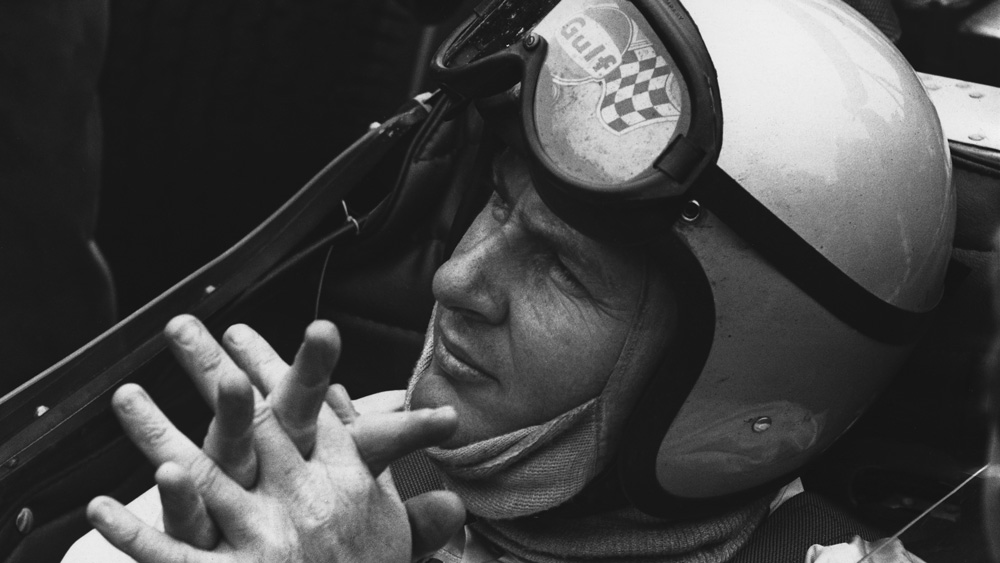 Photo: Courtesy of the McLaren Group.

About midday on June 2, 1970, the Goodwood circuit in south-east England fell silent. Bruce McLaren had been testing his latest Can-Am car and was squeezing in one more lap before lunch when the vehicle’s rear bodywork came adrift on the Levant Straight and he slammed into an abandoned marshal’s post at 180 mph. Motorsport had lost a true hero of the racetrack at the age of 32.

Fifty years on, Bruce McLaren is still revered in motoring circles around the world. And it’s no wonder. He won the 24 Hours of Le Mans in 1966 driving a Ford GT40, then the 12 Hours of Sebring the following year. Team McLaren also dominated Can-Am from 1967 to 1972—Bruce himself winning the series in 1967 and 1969—and his eponymous F1 team has gone on to claim eight World Constructors’ Championships and 12 World Drivers’ Championships.

Bruce McLaren at the 1968 Los Angeles Times Grand Prix in Riverside, Calif., a race he went on to win.  Photo: Courtesy of the McLaren Group.

After his death, the team took the Indy 500 twice during the 1970s. To this day, McLaren is the only man to win an F1 Grand Prix in a car he designed, and with his name on the wing.

To say McLaren was a genius driver is to ignore his remarkable skills as an engineer and team leader. Not bad for an amateur who entered international motorsport on a scholarship, having spent years of his childhood confined to a hospital bed.

I recently travelled halfway around the world from Goodwood to New Zealand, where Bruce McLaren was born. My vehicle for exploration was the McLaren GT, the British marque’s 612 hp grand tourer that bears the hallmarks of the M6GT that Bruce designed as McLaren’s first road car in the 1960s. Alas, the latter never saw production.

Bruce McLaren in his prototype M6GT.  Photo: Courtesy of the McLaren Group.

A mid-engined supercar, the new GT is McLaren Automotive’s most practical design ever, with a unique, side-hinged glass screen over the rear luggage space. The cabin is quieter and more luxurious than other McLarens, with a “comfortable” suspension set up for touring.

When I visited, it was just ten days before New Zealand went into lockdown due to the pandemic, but Auckland was still business as usual. McLaren grew up in an apartment here, above the family garage in suburban Remuera. His father, Les, repaired vehicles, and the young Bruce was soon getting his hands oily.

Today, the building is a clothing store, but in the late 1940s, Bruce would have been working the forecourt with his father. He also captained the rugby team at nearby Meadowbank Primary School before contracting a hip disorder that kept him in a children’s home for almost three years.

Bruce later taught himself to drive in the family’s backyard, and that first car is now on display at the Hampton Downs Motorsport Park, an hour south of the capital. There is where the Bruce McLaren Heritage Centre is located, a museum—run by enthusiast Zeta Panton—that boasts a treasure trove of memorabilia.

“Bruce became an absolute legend of motor racing, but it all began in this 1929 Austin 7,” she explained. “This is the car that fueled Bruce’s racing bug. It was used as a business car for the garage but Bruce learned how to drive in this car, before he passed his test at age 15.”

Behind the wheel of the 1929 Austin 7 that Bruce McLaren learned to drive in.  Photo: Courtesy of the Bruce McLaren Heritage Centre.

Packed in around the seven McLaren-related cars on display are some other real gems. His overalls (pinned to the wall), trophies, keepsakes, as well as his first toolbox with a hand-painted lid. And upstairs, there’s an extensive collection of newspaper cuttings.

McLaren entered his first hill climb in an Austin 7 Ulster when he was 14 years old. At age 22, he was selected by New Zealand’s Grand Prix Association for its Driver To Europe program aimed at promising racers.

Not far from the Heritage Centre, off State Highway 1, is Pukekohe Park Raceway. Now a horse-racing venue, the circuit was opened in 1963 as the location for the New Zealand Grand Prix.

Bruce McLaren at home with his daughter Amanda.  Photo: Courtesy of the McLaren Group.

New Zealanders love their cars, but you’d be lucky to spot a McLaren here. The GT gives me superstar status on the two-hour drive south to Taupo and the Bruce McLaren Motorsport Park. The racetrack was renamed in Bruce’s honor in 2007, despite the fact that he never competed there. More evidence of the island nation’s pride for its native son.

Although based in Surrey, England, the McLaren Group keeps the connection strong with its founder’s birthplace by sponsoring a new driver apprentice program for New Zealand’s aspiring racers to train in Europe, a way for the company to honor its namesake and his start in competition.

“He was a very proud Kiwi and went back home as often as he could,” says his only daughter, Amanda. “It’s 50 years since that fateful day, but his memory still lives on.”