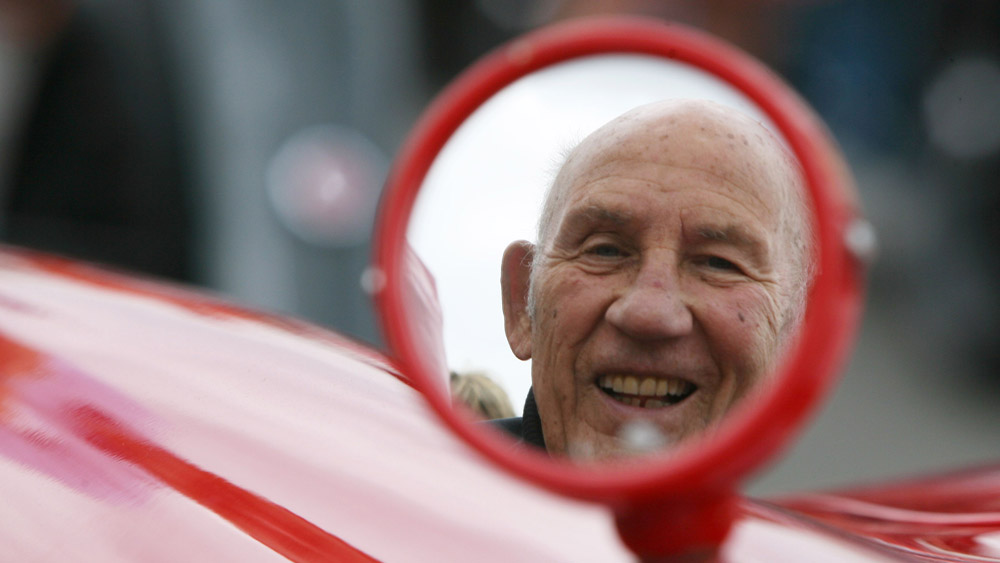 Stirling Moss was furious. On a soft spring night in the hills of Italy, the legendary driver—who passed away at age 90 on Sunday—stormed up to the offending competitor and laid it on the line in blunt Queen’s English. “When I’m coming up behind you and flash my lights, you move over,” he said. Then he wheeled on his heels and vanished as fast as he’d arrived.

The scene did not take place in 1955, however, the year when Moss stormed to a record-setting Mille Miglia victory in his thunderous Mercedes-Benz 300 SLR. Rather, it was 1999, when the recently knighted Sir Stirling, then 69, and his wife Susie, or Lady Moss, were guests of the Mercedes factory team at that year’s running of the Mille Miglia Storica. Moss was once again behind the wheel of that same 300 SLR, on loan from the Mercedes museum, and it created the same fuss as it did in 1955, literally parting seas of fans and competitors alike as it raced across 1,000 miles of Italian countryside.

I witnessed that scolding by Moss, which happened after a long day at the wheel and just as the historic race entrants had gathered around a tent filled with wine and cheese. I’d had the tremendous good fortune of having been invited that year by Mercedes to drive another of the cars the marque was fielding, in my case a jet-black 1955 300 SL Gullwing.

Apparently, what had transpired earlier in the day, I later learned, was that Sir Stirling had tried in vain to pass a slower driver—and, let’s be honest, this is Stirling Moss we’re talking about, a racing legend, and it was safe to assume we all were slower drivers—and had instead met resistance as the offending vehicle blocked his progress. What it said to me in that instant was crystal clear: Moss might have been pushing 70, but the fierce competitor in him had never died. In fact, there’s little doubt it stayed a fixture of his formidable character until his last breath.

Consider not so much Moss’s many victories; most rate Moss as perhaps the greatest driver to never win a World Championship. But judge instead both the wonderful flair and the fierce competitiveness he displayed throughout his life.

Legend has it that Enzo Ferrari was eager to secure his services when Moss was in his roaring 20s. But something about what Il Commedatore said put Moss off, and so was the deal. Enzo’s loss, as Moss would win 212 of 529 races, including 16 Grand Prix triumphs.

Think also about how Moss bravely hauled himself back from the near-dead after a horrific crash at Goodwood in 1962. Moss was in a coma for 38 days, but eventually came back to race. Then, about 10 years ago, another recovery that defied belief, this one at age 80. He’d fallen down an elevator shaft at his house and had broken both ankles and chipped a vertebra. The man simply exuded British resolve that went well beyond the cliché stiff upper lip. He seemed to devour life like a race track and knew only one speed, flat out.

Stirling Moss trapped in his car after accident at Goodwood in 1962.  Photo by Peter Elinskas/Daily Mail/Shutterstock.

The five days I spent in his company during that Mille Miglia Storica remain etched in my mind, fresh as spring rain. The way he graciously explained to a neophyte the rules of the historic rally. The manner in which he greeted fans, with an amazing mix of humility and a definite sense of himself and his place in racing lore. The way he’d throw that beast of a 300 SLR into turns, back end sliding just so to position himself for the next straight. Life lessons, all.

There was one moment towards the end of that rally when my co-driver and I spotted the SLR headed our way at the end of a stage. Soon, we were both overcome by a sense of shame. There’s no other word for it.

The heavens had opened up hours before, and we’d been complaining to ourselves how difficult it was to drive our 300 SL coupe, with its meager wipers, in such a downpour. And then came Sir Stirling and Lady Moss. All fans of vintage racing cars know that the 300 SLR is an open topped machine. Not only had the duo driven, as we had, in a torrential rain storm, but they’d done so with no protection save two cheap plastic ponchos. In addition, they beat almost all comers in the process that day.

As the 300 SLR grumbled to a stop, we looked on as Moss helped his wife out of the car. With a smile, he turned to us, ignored our dumbfounded looks and, smiling, said simply, “Cheerio.” Cheerio, indeed, Sir Stirling Moss, you have earned pole position in the hearts of most motorsport fans the world over.