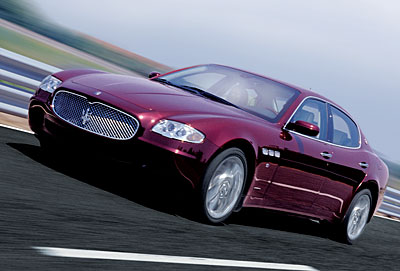 These are good times for Maserati, a company that a dozen years ago was only a few signatures short of bankruptcy and oblivion. Maserati sold almost 6,000 cars last year, which is about 20 percent more than it sold in 2004. The Maserati Quattroporte, a fast, luxurious $100,000 four-door, has become the world’s best-selling sedan in that price range. Last October, away from the road and on classic European circuits, a team of Maserati MC12 racecars won the 2005 FIA GT1 World Championship. Not to be outdone, Maserati’s pilots finished one-two-three in the driver’s championship.

Maserati’s history—like the annals of most European carmakers—begins with racing. In 1914 in Modena, Italy, Alfieri Maserati and his four brothers from Bologna began building racecars, very good racecars. The Maserati boys earned a class victory at the 1926 Targa Florio and continued racing their machines for the next dozen years, even winning the Indianapolis 500 in 1939 and 1940.

After World War II, the Maseratis brought a 1957 world driving championship to Juan Fangio and motoring immortality to Stirling Moss, Jean Behra, and just about anyone who climbed behind the wheel of a Tipo 60/61 Birdcage Maserati. This little Italian company eventually logged an extraordinary total of 500 wins, including 23 road-racing championships and 32 Formula One grand prix titles.

But as many automakers before it had done—MG, Ferrari, Bugatti, Opel, Panhard, and Talbot, among others—Maserati pulled the plug on its racing programs at the end of the 1957 season and instead concentrated on building road cars, a pursuit that held the promise of greater and more predictable profits. Although it produced such stellar models as the 3500GT, the Sebring, the Mistral, and the Ghibli, Maserati eventually was brought to its knees by too many changes of ownership, not enough funding, recessions, gas shortages, and automotive innovations that were more a matter of commercial pretense than they were serious products. In 1993, Fiat acquired Maserati by paying a few token dollars and the company’s back taxes.

In its wisdom, or maybe in desperation, Fiat in 1997 handed control of its invalid brand to another marque in its stable, Maserati’s old racing rival Ferrari. It cost Fiat/Ferrari almost $1 billion to rebuild the Modena plant and design a pair of new cars, the Maserati Coupé and Spyder. They were smart, quick, sold for $80,000, borrowed heavily from Ferrari suppliers, and were described by then Ferrari boss Luca di Montezemolo as faux Ferraris for those who could not afford a real Ferrari.

Neither car set the Po on fire. But they did reacquaint the world with the brand, and they served firm notice that Maserati should be considered a contender in the luxury sports car market. Then di Montezemolo, well aware of what racing as a marketing tool had done for Ferrari, introduced the MC12 and announced Maserati’s return to endurance racing. Plans also call for Maserati to resume racing at Le Mans, possibly as soon as this year or by 2007.

The Quattroporte has become the new doge of Modena and is now available in two forms: the 400 hp Quattroporte Sport GT and the more luxurious Executive GT, both of which cost about $110,000. Maserati also offers a stock GranSport (if the term stock can be applied to any 170 mph, Alcantara-lined, wood-trimmed coupe) and the GranSport Spyder roadster. Both used the comeback Coupé and Spyder as their test beds.

At the 2002 crescendo of the remarketing of Maserati, a courier brought a $6 million Stradivarius from Italy to the United States for Russian virtuoso Sergei Krylov to play at a series of sales parties. If the combination of martinis, Mozart, and Tartini did not strike a chord with the auto-buying public, Maserati’s cars certainly have.