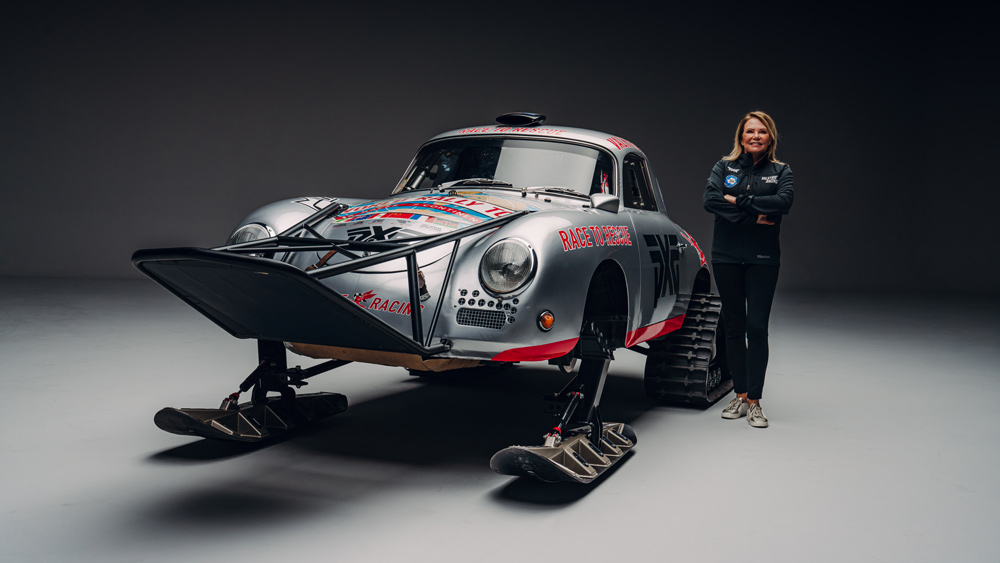 Kieron Bradley, senior chassis design engineer for Group Lotus, got an unusual request two years ago. Renee Brinkerhoff, who had driven in rallies on six continents, wanted to add the seventh to the list: Antarctica. The car: Her 1956 Porsche 356A.

“It would not be my vehicle of choice,” Bradley admits. “It poses a lot of problems. First, the vehicle’s age—it has seen a wealth of incidents. On top of that, it’s only two-wheel drive.” Bradley says they considered a variety of options to help the vintage Porsche make the trek, including gargantuan tires often used by other automobiles that conquer icy terrain. But considering the car’s geometry and the goal to maintain the visual identity of the 356, it wasn’t practical.

Brinkerhoff, however, had certainly come to the right place. Bradley had plenty of experience modifying vehicles for extreme weather, including a bio-fueled Toyota Tacoma he altered and drove 600 miles to the South Pole, setting a world record in the process.  But looking at the classic Porsche gave Bradley an epiphany. “If we can’t roll it, we’ll slide it,” he notes.

Over the next months, Bradley worked on the new design, which centered around tracks for the rear and skis for the front. “It would be a disgrace to take the style of the vehicle and put it on the underpinnings of another vehicle,” he says. “To me, that would be cheating.”

Bradley created and tweaked his designs digitally via CAD, then fabricated everything at his shop in the UK. The final configuration is a set of flat-bottomed skis with a central blade that would be nimble enough to traverse ice and snow at temperatures as cold as minus 58 degrees Fahrenheit, and be easily repairable with a skeleton crew. “It’s very easy from the couch to make suggestions like using carbon-fiber skis, but it’s not so easy to repair carbon fiber when you’re 300 miles away from base,” he explains.

Renee Brinkerhoff with the Porsche 356 she has been driving all over the world in a fundraising effort to fight human trafficking.  Photo: Courtesy of Valkyrie Racing.

Other additions include crevasse bars and a specialized brace and suspension system, as well as a welded roll cage, a rear-window emergency exit and twin solar panels that can help provide auxiliary power. “People don’t understand the complexity of welding materials at minus 40 degrees, with limited amounts of shelter,” Bradley says. “Every component has been designed with the view that it’s repairable in the field. We can lose half the rivets and the skis will stay together. There’s a redundancy in everything.”

After minimal testing on grass and light snow in Bradley’s backyard, Brinkerhoff’s Porsche is set to complete the 365-mile trek from Union Glacier base camp toward the South Pole and back. Brinkerhoff will be accompanied by Jason De Carteret—an experienced polar guide who was with Bradley on his record-setting South Pole run. But Brinkerhoff and team, which includes one mechanic, as well as Brinkerhoff’s daughter and a videographer, aren’t out to set speed records. The pace will be slow and steady, with the modified Porsche 356 traveling less than 30 mph.

The vehicle now features tracks for the rear and skis for the front.  Photo: Courtesy of Valkyrie Racing.

“I’ve been hearing people say this is one of the most dangerous and difficult challenges,” Brinkerhoff told us before departing. “It is very sobering and the weather and terrain is some of the most difficult on the planet. The winds create literal walls of ice that you can’t see, and it would be like hitting concrete.”

Brinkerhoff decided to conquer the southernmost continent after driving nearly 20,000 miles in her 356, including the Peking-to-Paris Rally and East African Safari Rally, under her Valkyrie Racing banner. As part of her endeavors, Brinkerhoff’s non-profit arm works to raise money to bring awareness to, and fight, human trafficking. While she says she can’t give specific names of many of the charities she contributes to for privacy reasons, they include organizations in India, Kenya, Brazil and Thailand. “We follow those dollars,” Brinkerhoff tells us. “We don’t just write a check; we go to the home and make sure where the money goes.”

Six continents down, one to go.  Photo: Courtesy of Valkyrie Racing.

When Brinkerhoff returns from her Antarctic adventure, she wants to continue to compete in rallies and other driving events. “I have this huge yearning to get back into the car again,” she says. “Maybe the La Carrera, I don’t know.” To achieve that, the 356 will have to be turned back into a road car. But for now, Brinkerhoff and her polar ice machine are on a rescue mission of sorts, one that’s taking them to the end of the Earth.