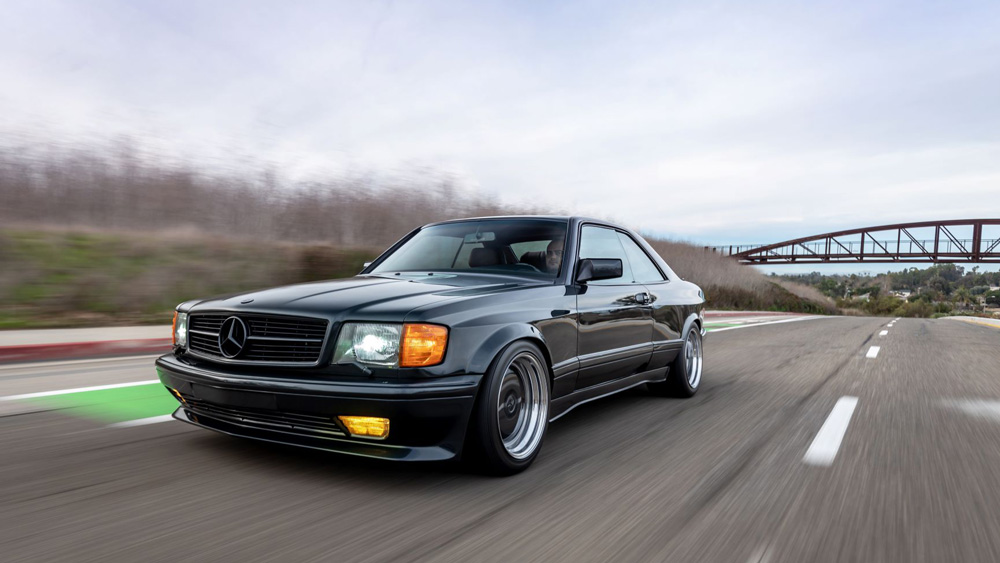 Back in the late 1980s, one of the premier muscle cars money could buy was a thundering Mercedes-Benz 560 SEC 6.0 ‘Wide-Body’ from AMG. Insanely powerful, insanely expensive and, with only 50 or so examples ever built, insanely rare.

At the upcoming Russo and Steele collector car auction—running January 15 through 19—in Scottsdale, Ariz., a stunning tribute to the legendary Wide-Body Benz coupe will go under the hammer, with an impressive $250,000 to $300,000 estimate.

Based on a pristine 1989 560 SEC with just 32,000 miles on the clock, the car was given a total, ground-up restoration by Southern California–based Bespoke Motors, which included a complete, one-off Wide-Body body kit re-created in carbon fiber.

In addition to those iconic, bulging front and rear fenders, AMG-replica front and rear lower fascias and spoilers were also molded in carbon, along with carbon rocker panels.

The one-off automobile has only 32,000 miles on it.  Photo: Courtesy of Russo and Steele.

To complete the unmistakable ‘look’ of an original Wide-Body, AMG’s super-wide, polished monobloc alloys were reproduced. Then, the entire car was painted in that sinister shade of Mercedes-Benz Blauschwarz metallic black and every piece of chrome trim blacked-out.

Open one of those huge, vault-like doors and it’s hard not to be wowed by the period-correct, body-hugging Recaro bucket seats trimmed in gorgeous, hand-stitched red leather. The restorers also created a unique ‘Gray Zebra’ wood veneer for the door panels and dash, and sourced a period-correct AMG Momo steering wheel.

As part of a full mechanical rebuild, the car comes with new coil-over suspension, bigger brakes (front and rear), and a bespoke stainless steel high-flow exhaust.

If there’s a major shortcoming with the car, however, it’s that it retains the stock 5.5-liter V-8 from the 560 SEC. The crowning glory of the Wide-Body was AMG’s conversion to a heavy-metal 6.0-liter V-8 with new AMG-designed cylinder heads, twin overhead cams and 32 valves.

This modified V-8 took max power up from the standard 238 hp to an impressive, for the time, 385 hp. Even more formidable was the engine’s ability to produce twice the torque of the original 5.5 at half the engine speed. It was a monster, giving the car swifter acceleration than a Lamborghini Countach.

The lack of the latter will likely turn-off purist bidders, though the car’s stunning restoration and conversion to a carbon-fiber ‘Wide-Body’ look should excite lovers of the era’s Mercedes muscle.

The example on offer has a new coil-over suspension, bigger brakes and a bespoke high-flow exhaust.  Photo: Courtesy of Russo and Steele.

As for the estimate being as high as $300,000, that could be a stretch. At last February’s RM Sotheby’s Paris auction of the Youngtimer Collection, an original 1989 Wide-Body 6.0 with just 27,731 kilometers sold for $338,972. But then a similarly original car auctioned by RM Sotheby’s at Amelia Island last March fetched $179,200.