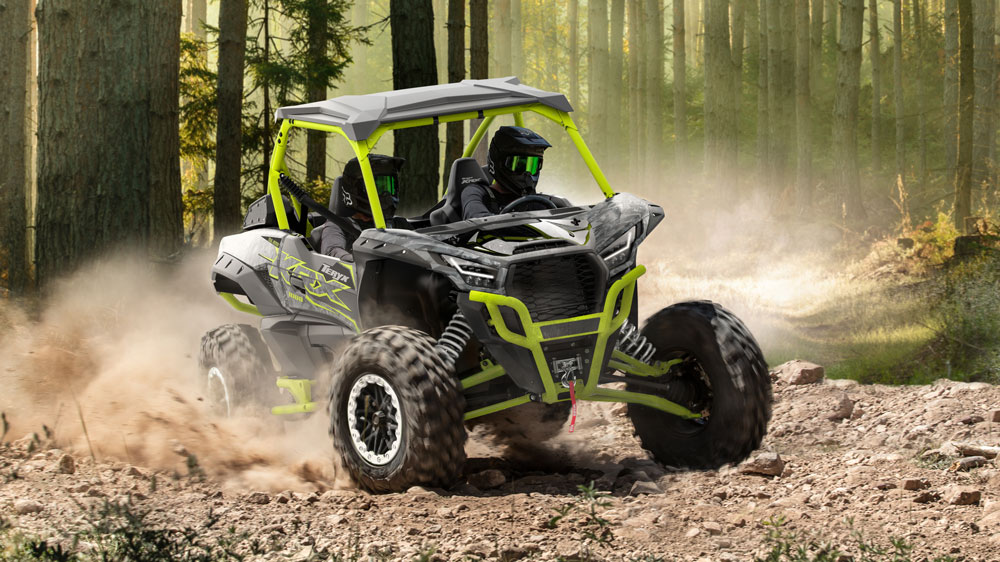 UTVs are currently taking the off-road world by storm, and after a day spent tossing around Kawasaki’s latest side-by-sides on the OHV trails of Southern California’s San Bernardino National Forest, it’s not hard to see why.

Appearing like a cross between a miniature tube-chassis dune buggy and a traditional single-seat ATV, the Teryx KRX 1000 boasts the kind of off-road chops that hardcore pickup trucks like the Ford F-150 Raptor and Jeep Gladiator Rubicon can only dream of: 13.6 inches of ground clearance, beadlock wheels wrapped in 31-inch Maxxis extreme-terrain tires and more than a foot and a half of suspension travel at either end.

At the Teryx KRX 1000’s heart is a 999 cc, liquid-cooled four-stroke engine, not unlike what you’d find strapped to one of Kawasaki’s sport bikes. Here, that mill is paired with a CVT automatic gearbox that offers High, Low and Reverse modes as well as a crawler gear–ratio function. And power can be sent to either the rear wheels or all four corners by simply flipping a switch on the dashboard.

Kawasaki brought along two flavors of the Teryx KRX 1000 for us to pilot—the Trail Edition and the Special Edition. Both come with a quick-release roof section and a Warn winch capable of pulling 4,500 pounds. The two versions are identical mechanically, but each is aimed at a slightly different subset of UTV enthusiasts. As the name implies, the Trail Edition is outfitted with a selection of Kawasaki accessories with an off-road focus—think tubular steel bumpers and nerf bars—while the Special Edition adds creature comforts like a 600-watt audio system with Bluetooth connectivity so you can jam out while dispatching all manner of rocks and ruts.

New to both Kawasaki UTVs and the Pinnacles OHV trails we’d be traversing, I approached the Trail Edition with a measure of caution, not so much for my own personal well-being, but for that of the hardware on hand. Roll-over protection is integrated into the Teryx KRX 1000’s design and the three-point seat belts provide a reasonable sense of safety, but encounters with lesser machines that touted serious all-terrain capability, only to bounce off the undercarriage skid plate at the first encounter with a large rock or significant whoop section, have made me a bit apprehensive.

Once settled in at the helm, I find the interface proves to be immediately intuitive for anyone who’s ever driven a car before: Turn the key, release the parking brake, put the transmission in gear and away you go. Kawasaki pegs the curb weight of the model at right around 2,000 pounds and, with 76 ft lbs of torque to play with (horsepower numbers aren’t provided, but estimates put it at about 110 hp), acceleration is lively in both high- and low-range settings, with the former providing a top speed of about 70 mph. Engine braking slows the KRX down whenever you’re not on the throttle, and when that’s not enough, 10-inch disc brakes are at the front and rear to provide additional stopping power.

The Teryx KRX 1000 generates 76 ft lbs of torque and has a top speed of approximately 70 mph.  Photo: Courtesy of Kawasaki Heavy Industries.

I inadvertently set off on the first leg of our journey in 2WD mode, which turns out to be a blessing rather than a curse. Even without sending power to the front wheels, the KRX effortlessly bounds over all but the most technical terrain, thanks in no small part to the Fox internal bypass shocks on hand here, which feature no less than 24 levels of compression adjustment to tailor the suspension’s behavior as experience and pace increases. And when I encounter a particularly tricky boulder at low speeds, simply backing up and putting the transmission in the Low setting is all it takes to continue on.

The compact interior of the Teryx KRX 1000.  Photo: Courtesy of Kawasaki Heavy Industries.

By the time I realize my mistake, I have already acclimated to the power delivery, grip and the incredible amount of suspension travel at my disposal, so adding four-wheel drive to the mix almost feels like cheating. What I discover along the way is that the braver I am with the throttle, the better the KRX performs. Whether crawling over rocks or blasting over undulations at high speed, very few obstacles put the Kawasaki out of sorts, bolstering my confidence behind the wheel and the fun factor in turn.

After several hours on various trails, we eventually make our way back to base camp. Once parked, a Kawasaki representative approaches my test vehicle—likely wondering why I haven’t hopped out yet—and asks if I’ve had a good time. Truth is, I’m hoping he will let me turn around and go right back out.