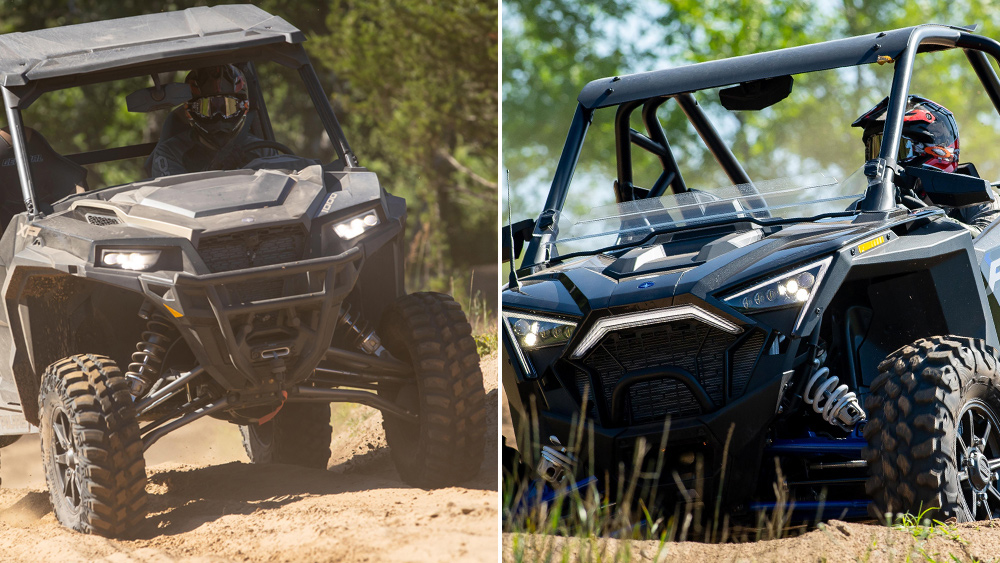 Originally designed with light-duty farm work in mind, side-by sides have, over time, transformed to become some of the most capable factory-produced off-road vehicles that money can buy. Now, Polaris has brought us to ERX Motor Park to drive that point home.

Located in Elk River, Minn., ERX plays host to a number of different short-course, off-road series throughout the year, and the Amsoil Championship Off-Road UTV races are some of the most well attended events held at the facility. It’s a testament to how widespread the appeal of these machines has become, and with that popularity comes the necessity for manufacturers to expand their lineups to ensure that no potential rider is left behind.

It’s through that lens that we gazed upon the 2022 Polaris General XP 1000 Trailhead Edition ($26,699) before rolling out on the course. Offered in both two- and four-seat configurations, it comes packing a 100 hp, four-stroke two-cylinder engine hooked to a passively variable transmission (PVT), along with 30-inch Pro Armor Crawler XG all-terrain tires and high-clearance suspension with Walker Evans Velocity Series shocks. The latter provide 14 inches of travel at both the front and rear.

It’s a combination that makes short work of just about any trail you can throw at it, but the General isn’t a one-trick pony. This is, ostensibly, the jack-of-all-trades for Polaris and, as such, there are creature comforts like a 7-inch touchscreen with GPS navigation as well as a Group Ride feature that allows riders to keep track of the other members of their party (even outside of cell range). There’s also a Rockford Fosgate audio system which, along with Group Ride functionality, comes standard on the Trailhead Edition. A substantial amount of focus is placed on actual utility, too, as evidenced by the large rear dump box that boasts a 600-pound payload capacity, in addition to the heavy-duty winch and the vehicle’s 1,500-pound tow rating.

“This is one of the fastest-growing segments in the industry,” notes Dave Elia, product director for General. “It’s a performance vehicle that you can have a lot of fun with, but it’s also comfortable on the trail, and it’s versatile—if you need to do some work, this is ready for it.”

Its duality proves to be a knife that cuts both ways. It takes very little time to acclimate to the controls, and the General’s upright seating position allows for excellent outward visibility in any direction. But while the 999 cc engine is fairly spritely, folks who are used to turbocharged mills may eventually find themselves wanting a bit more.

Designing a multitasker like the General is ultimately an exercise in compromises, and those trade-offs typically make their presence known in outlier-use cases—like during repeated laps on a UTV racing circuit. The General is up for all of it, but because of the relatively soft suspension tuning for increased trail comfort, and the utilitarian steering rack, it feels more in its element at a moderate pace on the trail with the tunes bumping rather than flying over jumps and counter-steering out of banked corners on a circuit.

But for those who value the latter above all else, there’s the RZR Pro XP ($21,999). Sitting at the top of Polaris’ performance UTV totem pole, this one is laser focused on the riding experience. Its 14.5 inches of ground clearance and trailing-arm rear suspension—which delivers up to 22 inches of suspension travel—will make owners of even the Jeep Wrangler Rubicon feel inadequate. And the RZR’s 181 hp, 925 cc turbocharged engine delivers almost twice as much grunt as the General’s power plant.

You sit low in the cab, strapped in tight to aggressively bolstered buckets by a race-style harness system. At speed, the boosted mill provides as much forward thrust as we’re brave enough to call upon from the loud pedal, and the quick-ratio steering rack is responsive and direct, but it’s the suspension that impresses us the most.

RZR Pro XP examples outfitted in Ultimate trim ($29,499) score Fox 2.5 Podium active dampers at all four corners. Similar to adaptive suspension systems found in contemporary sports cars, these shocks react to throttle inputs, steering angle, accelerometer information and other data in real time to improve stability. There’s three options for baseline firmness—Comfort, Sport and Firm—which can be selected via the touchscreen, and there’s also a big red “Oh Sh*t” button on the steering wheel that allows the driver to instantly set the dampers to their firmest setting. Think of it as a failsafe against bottoming out in case you suddenly realize that you’ve carried a little too much speed off of that last jump.

The RZR Pro XP has occupants strapped in tight to aggressively bolstered buckets by a race-style harness system.  Photo: Courtesy of Polaris Inc.

Try as we might, though, we can’t get the RZR Pro XP to beg for mercy; it’s truly at home at a place like ERX. The General held its own pretty well, too, and choosing between one or the other ultimately comes down to personal priorities. Still, if given the option, we’ll always prefer the one with the “Oh Sh*t” button.