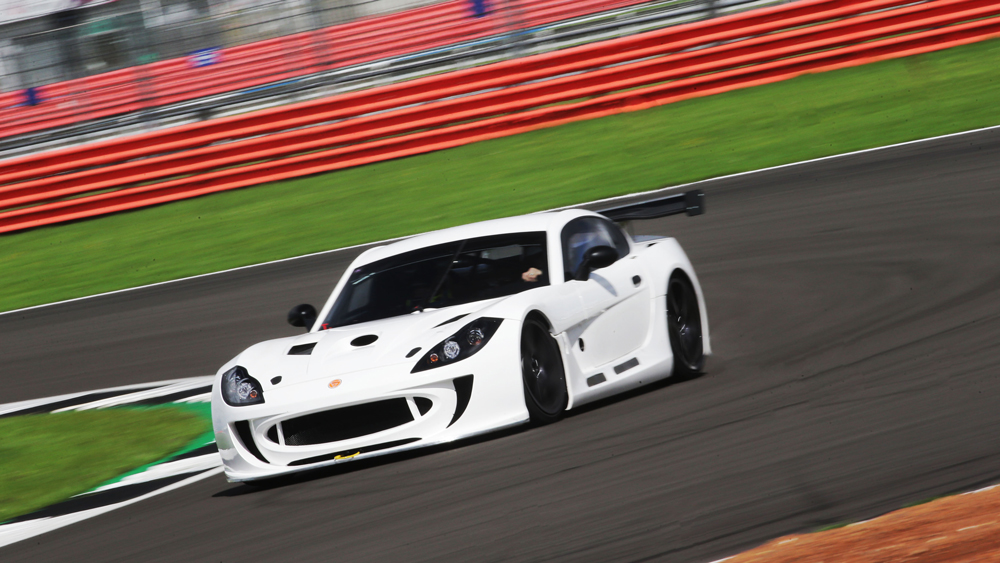 Clambering out of the Ginetta G56 GTA, I’m simultaneously buzzing with excitement and in need of a quiet lie-down. I’ve driven track-focused supercars on circuits before, but this is something else: a proper, honest-to-goodness race car.

Ginetta was founded in 1958 and currently hand-builds around 60 cars per year at its factory in Leeds, England. In Europe, its unique selling proposition is a “racing ladder” that allows drivers to participate from the ages of 14 through 17 in the Ginetta Junior series. Then, with enough talent and cash, drivers can potentially progress all the way to competing at Le Mans. Past success stories include Formula 1 ace Lando Norris and Jamie Chadwick, two-time winner of Britain’s all-female W Series Championship.

Now Ginetta is coming stateside. The company has already introduced its cars to race resorts such as Spring Mountain in Nevada, Autobahn in Illinois and Monticello in New York State. This month, it announced the inaugural North American Ginetta Challenge series, which comprising a 14-race season for G56 GTA owners. It’s in partnership with the National Auto Sport Association (yep, the other NASA) and, for $100,000, you could join the grid.

I meet my coach for the day, Charlie Robertson, at the flat and fast-flowing Blyton Park circuit near the English city of Lincoln. Robertson has climbed the Ginetta ladder from bottom to top: “I won the Juniors in 2012, then the GT4 Supercup in 2014,” he explains. “A year later, I finished first in the European Le Mans Series, driving alongside [British cyclist and Olympic gold medalist] Sir Chris Hoy.”

I’m clearly in good hands, but I still have butterflies as I pull on my balaclava and crash helmet, drop into the hard-shell bucket seat and strap into a five-point harness. The cabin is stark and functional; the steering wheel a slab of carbon fiber dotted with brightly colored buttons. My mirrors are filled by a sturdy FIA-approved safety cell and a towering rear wing.

The G56 GTA packs a modified 270 hp Ford V-6 inside a tubular chassis with plastic panels. Tipping the scales at just 2,425 pounds, the car can reach a top speed of 140 mph. No acceleration figure is quoted, but reckon a zero-to-60 mph time of less than 5 seconds. Dauntingly, the vehicle does without ABS, a brake servo or any electronic driver aids. There’s also a Motec telemetry system to record my every rookie mistake.

The cabin is stark and functional; the steering wheel a slab of carbon fiber dotted with brightly colored buttons.  Photo by Jakob Ebrey, courtesy of Ginetta.

We’re pushed backwards out of the pit garage (“You only use reverse gear in a race car when something goes wrong,” I’m told), then I fire up the front-mounted engine. Its bassy, insistent idle reverberates through my ribcage as I ease out the hair-trigger competition clutch. A traffic light turns green and we join the empty track, Robertson reeling off gear positions and braking points via the in-helmet intercom.

The Ginetta immediately feels alert and edgy, with super-quick steering that’s less than one turn lock-to-lock. Swapping cogs is much easier once you’re rolling, though, with paddles and a six-speed Quaife helical transmission that doesn’t require the clutch pedal. It even auto-blips on downshifts, helping you to stay smooth and concentrate on following the racing line.

Inside the tubular chassis is a 270 hp, naturally aspirated Ford V-6 engine.  Photo: Courtesy of Ginetta.

Where GT4 Supercup versions of the G56 use a Chevrolet V-8 and slick tires, the milder GTA has road-legal Michelin Pilot Sport 4S rubber. “It’s more forgiving when it starts to slide,” says Robertson, “rather than a sudden transition into oversteer.” Perhaps so, but when I hit the gas too early on the track’s second-gear final corner, the Ginetta snaps sideways and chucks us unceremoniously onto the grass. Lesson learned? Wait until the tires are warm.

After that initial wake-up call, my confidence in the G56 GTA quickly starts to grow. Fluid and analog, it’s a car that rolls up its sleeves and works with you. The brakes demand a firm shove, but are powerful and progressive, while the steering jostles with incessant feedback. The naturally aspirated V-6 also feels linear and utterly unburstable. “It will do a 24-hour race with no problems,” says Robertson about the power plant. All it lacks is a little aural drama.

The car does not have ABS, a brake servo or any electronic driver aids.  Photo: Courtesy of Ginetta.

Before long, I’m trail-braking into bends and clipping kerbs as my lap times start to tumble. By the time I pull back into the pit garage, sweating and slightly short of breath, the data logger shows a best lap of 1 minute, 14 seconds, around 5 seconds slower than a pro like Robertson. For a first effort, that seems satisfactory, but I’m already keen for another go.

Driving a G56 GTA in competition, dicing for position with 30 other cars, must be another level again. For less than half the cost of many lightweight supercars, it’s an exciting and relatively affordable way to go racing. Who knows, if you’re good enough, you might climb the Ginetta ladder to the very top.