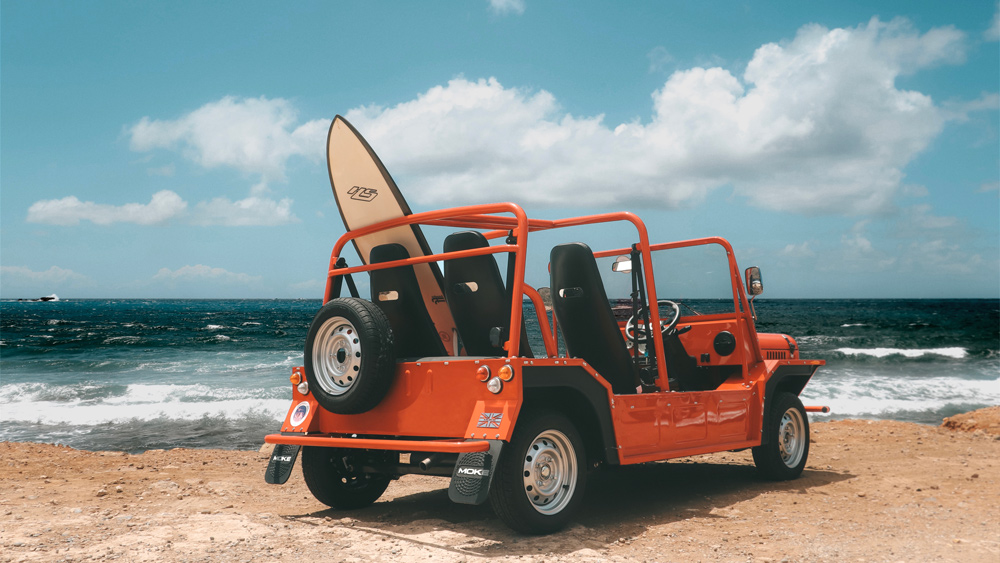 Staying true to form, the designer of the Mini, Sir Alec Issigonis, created another oddball hit back in the 1960s with the tiny Moke—a car with no roof or doors. Issigonis tried and failed to sell the original model to the British military as a lightweight utility vehicle in the late 1950s. Nicknamed “Buckboard,” it was no Jeep, and poor ground-clearance ultimately proved its undoing.

Undaunted, Issigonis adjusted the design to create the Mini Moke, but the car again failed to impress Army commanders in 1962, so the designer decided to create a civilian version to recoup some of the development costs. The resulting Austin Mini Moke was born in 1964. Named after a slang term for “donkey,” the funky Moke quickly won favor with the era’s celebrity set, including Brigitte Bardot, Peter Sellers and the Beatles. It even had a supporting role in several James Bond films. And surviving examples have been owned by the likes of David Letterman and Kate Moss in recent years.

The current Moke is based on a chassis that dates back to the late 1950s.  Photo: Courtesy of Moke International Ltd.

The box-shaped runabout has since been reborn by British company Moke International, which has owned the global trademark since 2015. Don’t expect too much though, as the new iteration is still a wacky, stripped-out machine with basic features.

Based on a chassis that dates back to the late 1950s, the latest model is fit with a 1.1-liter four-cylinder engine—making 66 hp—power steering, an automatic transmission, an uprated suspension and vastly improved brakes. Despite all that, driving this automobile is still a unique experience, one that some might even consider terrifying. A flimsy canvass hood covers the cabin and is supplemented by matching, clip-on door screens, essential for traveling any distance in poor weather.

As I pilot an example across the English countryside, I cross my fingers it won’t rain. That’s not to say the machine can’t cope with a downpour. Four waterproof seats and an upright glass windscreen take the worst of the elements. The top speed is over 65 mph, but I wouldn’t advise it. This car is best-suited as a casual transport in sunnier climes where equipment for inclement weather isn’t mandatory. Think of the Moke as a glorified buggy with attitude, perfect for short commutes to the beach in Southern California or Saint-Tropez.

Moke International makes the car in Britain before final assembly in France. The revised chassis has been re-engineered to accommodate four passengers, and look for an all-electric version to be released in the summer. Priced from around $30,000, the Moke can be customized with a choice of 13 colors, including eye-popping Flamingo Pink and Florida Orange. My tester also wears gleaming chrome trim and badging on the hood.

Other stylistic touches include leather hood straps and a retro radio, which is actually able to be heard above the wind noise, at least at speeds below 45 mph. And on a wet day, with weather equipment in place, the windscreen can be heated for improved visibility. In all, this upgraded version is not far off from Sir Alec’s initial car—basic in the extreme and as quintessentially British as fish and chips or a warm pint of beer.