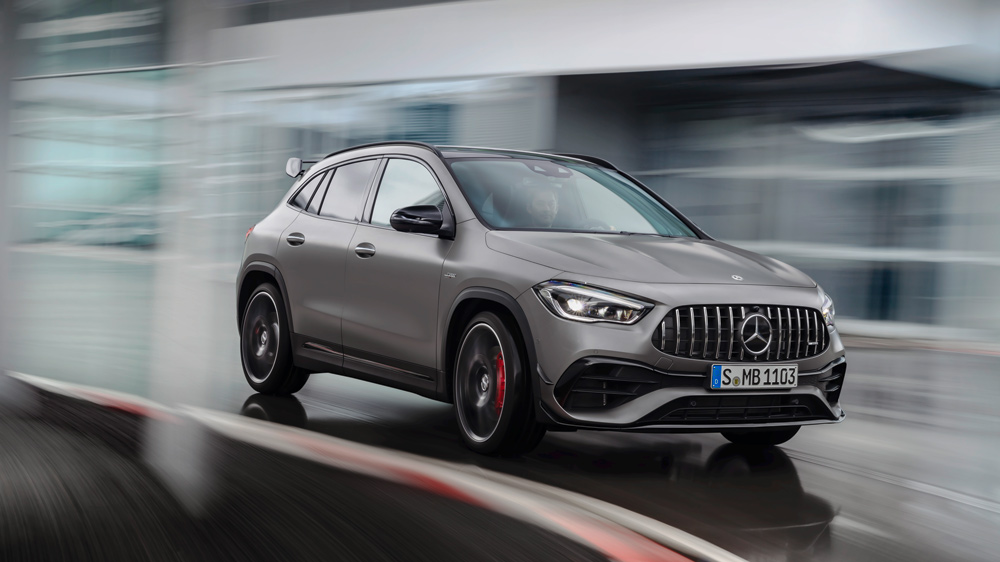 The city lights of San Francisco glowed softly through the famous fog. The freeway curved above the rooftops like a blade, and dancing on its edge, a Mercedes-AMG GLA 45 4MATIC+, its Burmester sound system throbbing to the beat of French techno while its quad exhausts belted out a low Teutonic howl. As automotive moments go, it was sublime, but my inner tree hugger couldn’t quite silence a certain nagging thought.

“How can I help you?” said the interface.

Considering our recent hi-jinx, the number seemed almost implausible, but lately I’d been coming to the realization that in the maximalist world of AMG, less can in fact be much, much more. When we think of AMG, we think of blisteringly fast machines carrying prodigiously powerful V-8s and V-12s with thundering pipes to match. What we don’t necessarily associate the high-performance division of Mercedes with are fuel-sipping four-cylinder engines, especially not beneath the hoods of SUVs. But for a variety of reasons—prominent among them, the need to meet stringent European environmental standards—such things have become a reality. But could a vehicle of this sort truly embody the look, the feel and, most critically, the spirit of AMG?

In the looks department, the verdict is clear at first glance. If the garden-variety Mercedes-Benz GLA 45 is a somewhat tame-looking creature, this variant, whose base price is $54,500, is positively feral. From the vertical teeth of its Panamericana grille and snarling front fascia to its blood-red AMG calipers, rakish rear wing and snub-nosed silhouette, this version projects pure, track-bred aggression.

The interior is just as purposeful and motorsport-driven, beginning with a pair of AMG Performance Seats (a $2,770 option) whose racing-bucket-like bolsters will have you hunting for the nearest S-curve. The instrument panel and display are crisp, clean and minimalistic, while steering wheel–mounted controls allow instant access to the GLA 45’s dynamic drivetrain and suspension functions for seamless transitions on the fly. On entering the cabin, I assumed it was clad in leather and Alcantara. In fact, it’s MB-Tex, which is Mercedes-Benz‘s own supple and highly durable leather alternative, paired with Dinamica, an Italian suede made from recycled polyester fibers. Leather, though, is certainly an available option.

Starting price for the model is $54,500.  Photo: Courtesy of Mercedes-Benz AG.

The beating heart of the model is the newly developed M 139 engine, which in keeping with AMG’s “One man, one engine credo,” is assembled entirely by hand at AMG’s ultra-modern production line in Affalterbach. The 2.0-liter, turbocharged four-cylinder generates 387 hp and 354 ft lbs of torque that can catapult the GLA 45 from zero to 60 mph in 4.3 seconds. In its hottest state of tune—standard in the AMG GLA 45 S variant—the M 139 produces 421 hp and nearly 369 ft lbs of torque, making it the world’s most powerful turbocharged four-cylinder engine in series production.

Even in its most tranquil driving mode, the SUV features a throttle response that’s instantaneous, giving the vehicle a sense of eagerness akin to that of a lightweight sports car. Tooling around San Francisco on a grocery run in preparation for a weekend trip to Boonville, a small town in Mendocino County’s picturesque Anderson Valley, I just as instantly found myself longing for the open road.

Of course, the road is never quite as open as one would like, and after slicing across the Golden Gate Bridge and through Marin County at a good clip, traffic drew to a near standstill at Petaluma. The GLA 45 cleverly capitalized on the bumper-to-bumper congestion by engaging its aggressive start/stop function, reducing emissions at every opportunity.

Even after the blockage let up, the GLA 45 continued cadging as much fuel economy as it could by way of Mercedes-Benz’s Gliding Function. The latter decouples the engine from the drivetrain whenever you lift off the throttle, dropping the revs to idle while you coast sans the resistance of engine braking. The GLA 45’s instrument panel, meanwhile, displayed a growing number of bonus miles accrued through its fuel-saving measures—a pointed reminder that automotive enthusiasm and environmentalism needn’t be mutually exclusive.

The 2.0-liter, turbocharged four-cylinder engine generates 387 hp, but an optional tune boosts it to 421 hp.  Photo: Courtesy of Mercedes-Benz AG.

As I cut off onto Highway 128 towards Anderson Valley and flicked the wheel-mounted dial to Sport +, the GLA 45 downshifted with a rumble and tightened its stance. Acceleration resembled nothing so much as an exquisitely controlled explosion—breathtaking yet reassuringly linear, with a confidence-inspiring grip and composure. Even launching out of the apex of a steep hairpin that closely approximated the Corkscrew at Laguna Seca, the AMG was utterly unfazed and unflappable.

Having recently driven the GLA 45’s sibling, the GLE 63 S Coupe, I found myself comparing the two time and again. Frankly, while the GLE 63 S is impressive in its greater overall power, I preferred the size of the GLA 45, as well as its adroitness and gratifying sense of connection delivered in spades.

From the vertical teeth of its grille and snarling front fascia to its blood-red AMG calipers, this SUV looks positively feral.  Photo: Courtesy of Mercedes-Benz AG.

Pulling into the familiar, oak-shaded compound in Boonville, I was excited to see my friends. It would be the first time since the start of the pandemic. And in the same instant, I couldn’t quite silence a certain persistent thought of serpentine country roads and the promise of a delicious drive home.