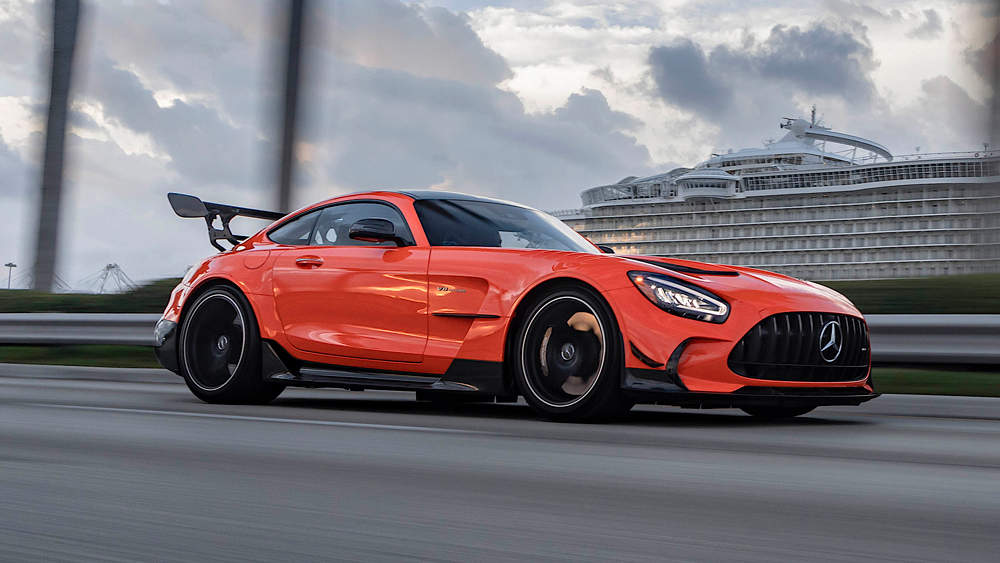 It doesn’t take rocket science to figure out that the next Black Series Mercedes-AMG will have an electric motor and a plug. Just look at the upcoming 2023 Mercedes-AMG GT 63S E Performance. The hybrid four-door is a clear indicator as to where the badge’s focus is heading. Mercedes-AMG is bidding a fond farewell to the non-electrified model with the track-focused Mercedes-AMG GT Black Series, featuring the most powerful AMG V-8 of all time—a re-fettled, 4.0-liter twin-turbo brute making 720 hp.

The power plant allows the sophisticated wide-body coupe to punch from standstill to 60 mph in 3.1 seconds, and go zero to 124 mph in under 9 seconds before topping out at 202 mph. The GT Black Series is limited to just over 1,700 examples, and the approximately 400 that are earmarked for the US are already spoken for. As you’d expect from such a coveted machine, speculators are hard at work. One online exotic-car platform currently has 21 listed for sale, ranging in price from $545,000 to $759,000.

The second factor in its exclusivity is the styling and appearance. Our test car, in its retina-searing color scheme of Magmabeam Orange, seems destined for hot laps around the Nürburgring Nordschleife. Compared to a stock AMG GT coupe, visual differentiators include a more gaping, slatted grille, a carbon-fiber hood, carbon front fenders (with evil-looking shark-gill vents), a two-stage carbon front splitter and a carbon roof. And AMG’s forged 10-spoke wheels are new as well.

Under the hood is the most powerful AMG V-8 to date, a 4.0-liter version making 720 hp.  Photo: Courtesy of Mercedes-AMG GmbH.

Did we mention that towering, slightly comedic rear wing? It’s actually made up of two wings, with the power-adjustable top blade spanning almost the entire width of the car. Both play their part in delivering an impressive 882 pounds of asphalt-hoovering downforce at 155 mph. The tour de force, however, is the engine. For the first time, it features a flat-plane crankshaft instead of a more typical cross-plane version. The flat-plane configuration makes for near-instant throttle response, a more linear powerband and added smoothness, and is also found in everything from a McLaren P1 to a Porsche 918 Spyder to a Ferrari 488.  Add turbos (delivering a whopping 24 psi of boost), bigger intercoolers and new exhaust manifolds, and you get a leap to 590 ft lbs of torque, delivered in a flat line from 2,000 to 6,000 rpm.

How does it drive? We’ve come to the Concours Club in Opa Locka, Fla., to wring-out the new Black Series on the private 2-mile road course with its 2,100-foot straightaway and challenging hairpins. As we play follow-the-leader with a Mercedes pro driver at the wheel of a stock, 550 hp AMG GT C Coupe, we find the Black Series to feel immensely capable, reassuringly approachable and confidence-inspiring. You don’t need to be Lewis Hamilton to have huge fun in this car.

Through corner after corner, the lead GT C twitches and squirms while the Black Series is right on its tail, supremely poised and balanced. A lot has to do with the super-sticky Michelin Pilot Sport Cup tires, the race-inspired upgrades to the suspension, and the sizable engine torque.

Of course, it helps when you have massive carbon-ceramic brakes that could stop a Peterbilt truck, sophisticated, three-stage adaptive damping and AMG’s skill-enhancing traction control. Brake ridiculously late into a turn and bury the throttle much too early coming out of it, and the Black Series just shrugs it off.

Yes, we wish the steering was a little chattier, and yearn for a more raucous, crackling soundtrack from the exhaust; it’s just too muted. But here is, without doubt, the finest and most desirable Black Series yet. We can’t wait to see how a potentially all-electric Black Series next leads the charge.