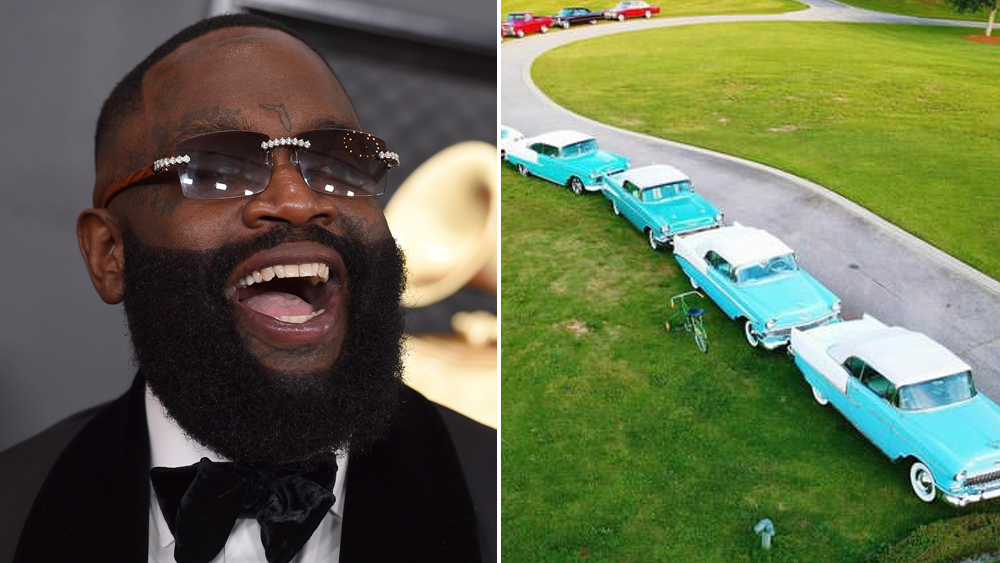 When you name your record label after an automaker, it’s a good bet that love cars. This is especially true if you’re Rick Ross.

The “Hustlin” rapper and Maybach Music Group founder recently showed off some of his most prized cars in an Instagram Story and they’re really something to behold. The video only offers up a small glimpse of Da Boss’s collection, but even then the line of vehicles still stretches as far as the eye can see.

In the clip, which was captured and posted by rap scene chronicler DJ Akademics, Ross can be seen walking down the driveway of his 400-acre, 109-room Georgia estate, which is lined with an assortment of cars and trucks from his collection. Despite his professed love of luxurious European marques like Mercedes-Maybach and Bentley, only 13 American-made vehicles make an appearance, including four of his seven Chevrolet Bell-Airs, a Pontiac Trans-Am and several generations of Chevy C/K trucks. They may not be supercars or luxury sedans, but each classic and vintage vehicle looks to have been lovingly maintained, something which Rozay credits to his go-to restoration expert, 57Freddy.

If you’re wondering what the rest of Ross’s collection looks like, look no further than the rest of his Instagram account. In recent months he’s shown off everything from, a Ferrari to Rolls-Royce to a Tesla.

While Ross clearly loves his cars, he also views them as an investment. “Somebody just paid me $20,000 to put five cars in front of something just to take some pictures for two hours,” he said on the I Am Athlete podcast late last year. “If I’m moving with it, I’m going to try my best to get the most out of it. Why not?” Why not, indeed.