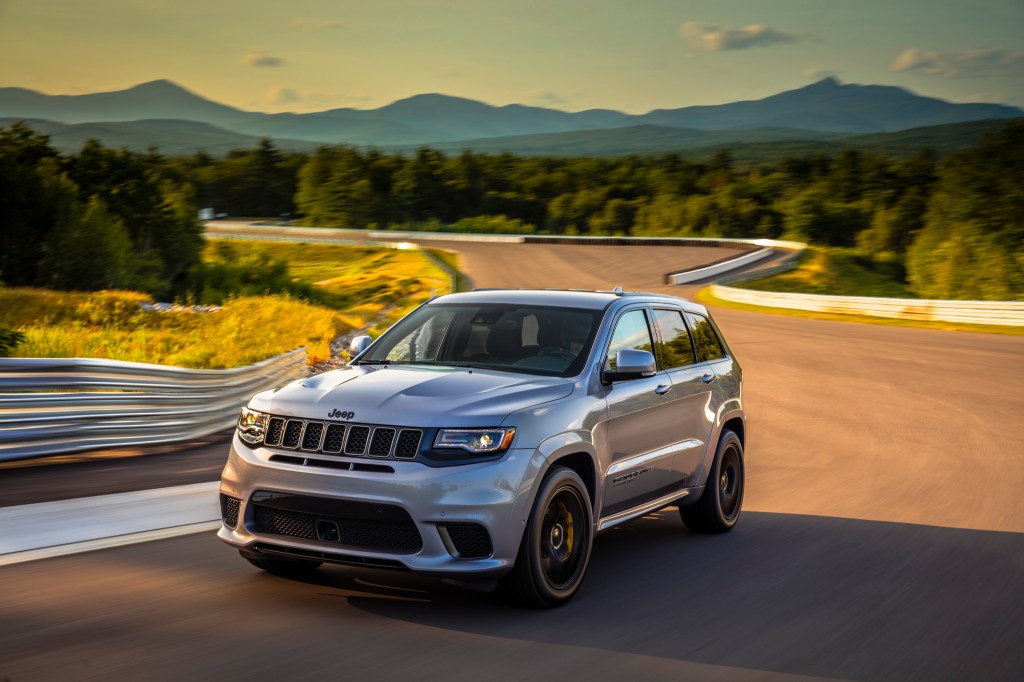 With half of a long straightaway stretched out in front of me, I firmly place my left foot on the Jeep Grand Cherokee Trackhawk’s brake. It’s an odd sensation, but with the vehicle in Launch Control mode, it’s a requirement to experience the Trackhawk’s aggressive acceleration.

The SUV’s supercharged 6.2-liter V-8 engine churns out 707 hp and 645 ft lbs of torque—performance numbers that almost mirror those of the Dodge Charger and Challenger SRT Hellcats. Having driven the latter model recently and knowing that the SRT Engineering division had its hand in the Trackhawk’s engineering and development, I have some idea of what to expect. Then again, those aforementioned vehicles represent Dodge’s latest foray into retro-inspired American automotive muscle—this is a sport utility vehicle.

With my left foot still firmly depressing the brake, I stomp on the accelerator with my right foot. The engine revs to about 2200 rpm and gives me a shake. That, I’ve been told, is my cue. As quickly and definitively as I can, I release the brake and the back of my head is pinned to the headrest as the Trackhawk surges forward. All at once, I’m consumed by a thrill-ride’s thrust to my stomach and an abandonment of breath. This is no ordinary SUV.

“Some Europeans aren’t that interested in an aggressive, neck-snapping launch,” explains Erich Heuschele, SRT’s director of vehicle dynamics and motorsports engineering. “They’re not about taking off with an extreme change in acceleration and smoking tires. That can be considered a very American thing, so we made a very American, high-performance SUV which, which up until now, has been the domain of the Germans.”

Although the Trackhawk’s aforementioned 6.2-liter V-8 engine plays a pivotal role in the vehicle’s off-the-line sprinting capabilities, the vehicle also benefits from a few other key components. A new Torque Reserve system pre-positions the supercharger bypass valve to generate boost and, upon acceleration, instantly deliver a reserve of torque. The Trackhawk also features a loose, high-stall-speed torque converter (one that Heuschele describes as “American drag-racing style”) and a transmission with a high torque capacity in first gear. “The transmission can accept everything that the engine gives it,” says Heuschele, “and that’s by design.”

The Trackhawk, which starts at $85,900, can be as aggressive or demure on the open roads as a driver would like. This is due to a selection of five driving modes (Auto, Sport, Track, Tow, and Snow), as well as a custom mode that allows drivers to personalize a number of the vehicle’s performance settings. Not surprisingly, drivers must keep a watchful eye on the speedometer, as the Trackhawk can effortlessly reach—and surpass—legal speed limits.

Because of that, the vehicle shows off best on the track. In fact, Jeep’s brand director Scott Tallon believes that a fair number of Trackhawk owners will at some point venture onto a closed track to better enjoy the vehicle’s capabilities. “The individual that buys a 707 hp Jeep, they’re going to want to put the Jeep through its paces at some point in time,” says Tallon. “And the only place that they can push it to its limits is on the track.”

With this in mind, Jeep chose an ideal setting for the Trackhawk’s debut—Club Motorsports’ challenging 2.5-mile-long race circuit in west central New Hampshire. Less than one lap in, drivers will easily forget that they’re motoring a 5,300-pound SUV around the track’s 15 turns. “This is a car that rewards a skilled driver who has the capability to drive the vehicle at its limit,” says Heuschele.

I may be a competent track driver, but my skills fall short of taking the Trackhawk to its limit. So to better understand—and to experience—its impressive performance, I ask Heuschele for a ride. After all, he has won two SCCA Club Racing National championships and three SCCA Pro Racing championships over the course of his more-than-20-year racing career.

Two turns into our lap, Heuschele is hitting his marks, taking aggressive lines into and out of the corners, and the vehicle is taking it all in stride. “That’s 87 mph through the apex,” Heuschele says, almost giddily, as he takes the Trackhawk through the circuit’s ninth turn, then powers up the hill. “She’s not fighting me at all,” he adds. “She’s doing what I ask of her.”

During our cool-down lap, the racer opines about how atypical this automobile is. “There never used to be any vehicles that were like this,” says Heuschele. “It’s almost a new genre.”