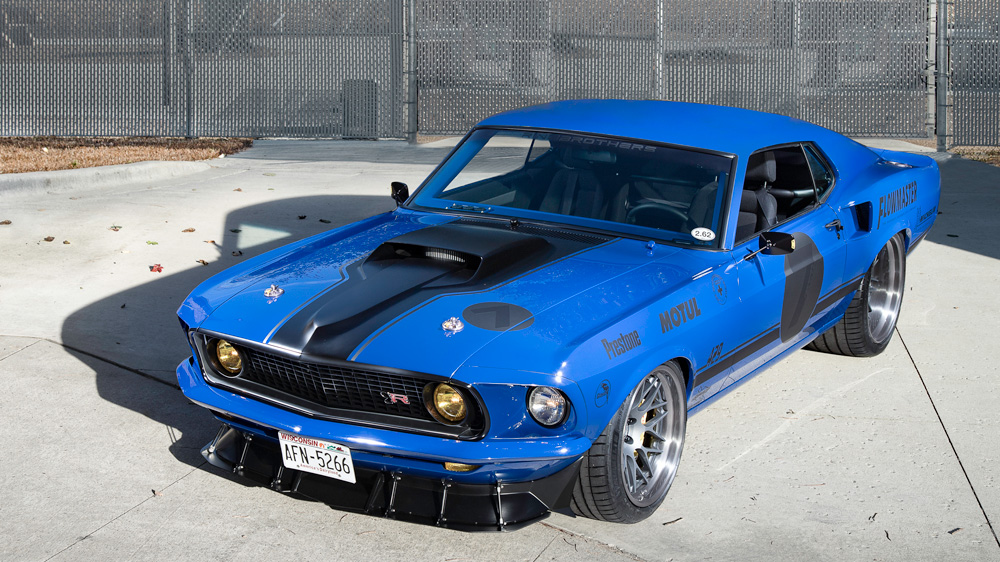 Every year dozens of eye-catching and exceptional custom-built vehicles sparkle while on display at the Specialty Equipment Market Association (SEMA) show in Las Vegas, held this year from November 5 through 8. This year was no different, as the Las Vegas Convention Center played host to a bevy of modified or bespoke vehicles that seemingly satisfied every automotive enthusiast, regardless of his or her personal interest. For those with a penchant for classic Mustangs, Ringbrothers delivered in customary fashion, unveiling a 1969 Mustang Mach 1 adorned in a bespoke paint scheme appropriately branded Big Boss Blue.

The car’s steel and carbon-fiber body panels were all reshaped by Ringbrothers.  Photo: Courtesy of Ringbrothers.

Although Ringbrothers has presented numerous unique Mustangs over the years, this ’69 Big Boss Blue Pony represented the Wisconsin shop’s first Mach 1 project. Its moniker “UNKL” reflects the commissioning client’s desire to create a classic, high-performance American street and track star that paid homage to his uncle, a man who harbored a lifelong passion for motorsports and who introduced the client to auto racing.

The Mustang’s body was extended by an inch on each side.  Photo: Courtesy of Ringbrothers.

Beyond its name and discreet racing livery, the car further honored the client’s uncle with its power plant, a 520-cubic-inch Jon Kaase Boss engine that churns out 700 hp—the engine was specifically chosen for being a better representation of the era in which the original Mach 1 was built than a more modern Ford Coyote crate engine.

Under the hood is a 520-cubic-inch Jon Kaase Boss engine.  Photo: Courtesy of Ringbrothers.

All of that power under the hood is transferred to the rear wheels by way of a QA1 carbon-fiber driveshaft, which is paired with a reworked Bowler six-speed Tremec transmission. It’s a configuration that evokes nostalgic sensibilities (minus the carbon fiber, of course), and one that allows the driver to take hold of the reins when riding this wild stallion.

Elsewhere, the UNKL Mustang features a highly modified body—a marriage of steel and carbon-fiber body panels, all reshaped by Ringbrothers. The car’s stance, which appears slightly more aggressive than that of a stock Mach 1 from the late 1960s, was achieved through an extension of the Mustang’s body—an inch on each side. The vehicle not only looks aggressive, but sounds that way, too, thanks to a custom stainless-steel Flowmaster exhaust. The shop also machined one-of-a-kind parts for this singular Mach 1, including reshaped bumpers and a slew of engine-bay accessories.