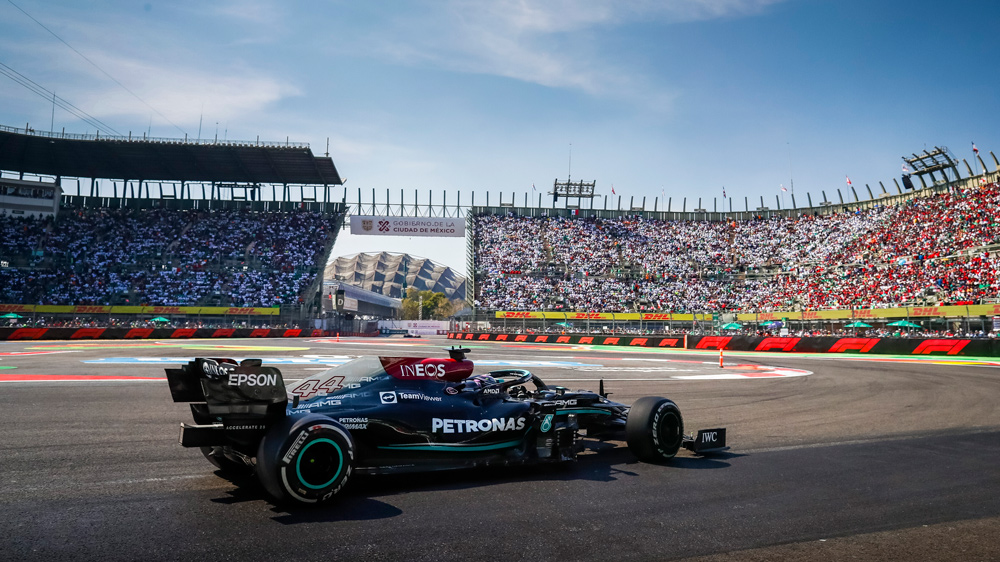 The 20 cars launch from the starting grid like angry hornets from a hive, the din of their turbocharged 1.6-liter V-6 engines quickly diminishing as the racers catapult down the opening straightaway of Autódromo Hermanos Rodríguez, marking the start of Formula 1’s 2021 Mexico City Grand Prix. As a first-time attendee, I have numerous questions. Surprisingly, however, the biggest at the moment is whether to stay against the railing, immediately above pit lane, or go in for another glass of Champagne at the Ritz-Carlton’s exclusive Silver Arrows Lounge—part of a partnership between the hotel chain and the Mercedes-AMG Petronas racing team.

It’s a collaboration that began in 2019 with the Montreal Grand Prix, where Ritz-Carlton became the first official hospitality provider for Formula 1’s current constructors’ champion. Although the alliance survived Covid last season, the general public was persona non grata at any of the contests, but everything’s back in full gear now and the affiliation is mutually beneficial for select fans and the sport’s top racer alike.

“I’m probably going to 30 countries within the year,” notes seven-time champion Lewis Hamilton, in a conversation with Robb Report a few days prior to the race. Hamilton, who has been with Mercedes since 2013, goes on to explain that “what’s really, really important for me, and I think all of us on the team—the 100-plus of us traveling around the world—are home comforts. And the Ritz-Carlton goes so far out of the way for us; they try to make it more home.”

For the most successful racer in Formula 1 history, though, one element of hospitality trumps all others. “I travel a lot with my dog Roscoe, and they [the Ritz-Carlton] have a bed for him and end up putting toys in the room, so as soon as we walk in, Roscoe knows where he’s staying,” says Hamilton. “And if I need someone to take Roscoe out, for example, they are always there to give a helping hand—it feels like family, to be honest.” Hamilton also mentions that, in return, his team is “at all these great races and destinations and we’re highlighting the brand on more than 23 occasions throughout the year.”

When it comes to this particular race, the brand’s exposure is in overdrive with the opening of the first Ritz-Carlton in Mexico City only the week before. The 58-story tower flanks Paseo de Reforma in the financial district and houses 153 guest rooms, a full-service spa facility, a 24-hour fitness center and two restaurants, including the top floor’s Asian-themed Ling Ling by Hakkasan.

The 58-story Ritz-Carlton, Mexico City (left) opened just over a week before the race.  Photo: Courtesy of the Ritz-Carlton Hotel Company, LLC.

According to Donna McNamara, vice president and global brand leader for the Ritz-Carlton, the hotel “marks a particularly exciting moment for the brand as we made our foray into an incredible city rich with opportunities for immersive cultural exploration and discovery.” But to be expected, there have been some hiccups since the debut, admits general manager Luis Lopez. The minor glitches—like the temporary lack of hairdryers and shower-door seals that do anything but—obviously didn’t deter numerous Formula 1 fans from making the impressive new addition to the skyline their basecamp.

Yet not all ticket-holding guests have access to the Ritz’s racetrack amenities, such as VIP tours of pit lane and entry to the Silver Arrows Lounge—that’s reserved for an elite few with the appropriate status in parent company Marriott’s loyalty program, Marriott Bonvoy. Those who have accrued enough points can unlock Marriott Bonvoy Moments packages and Ritz-Carlton Ultimate Weekend offerings that include rarified Formula 1 experiences through the Mercedes team that can’t be purchased otherwise.

Those who made the loyalty grade for the 18th race of the season were witnesses to quite the motorsport spectacle, as national hero and Red Bull Racing’s Sergio “Checo” Perez, from Guadalajara, went into the weekend with the country on his shoulders. Perez, who most recently took third place at the United States Grand Prix in Austin, Tex., earned fourth position in Saturday’s qualifying round, with the third spot going to the season’s current overall leader and teammate Max Verstappen. The Red Bull racers had finished behind Hamilton and Valtteri Bottas, also with Mercedes, the latter earning pole position for the next day.

During the actual race on Sunday, though, the first turn provides all the drama. As Verstappen overtakes his rivals on the outside corner, Bottas spins after getting bumped by McLaren’s Daniel Ricciardo, which causes a ripple of mayhem. Simultaneously, Perez is forced through the grass while Yuki Tsunoda of Alpha Tauri and Mick Schumacher of Haas are swept up in the chaos and sent to the showers early. The order at the top doesn’t jockey around much after that, though Verstappen makes a dash for the pits on lap 34, temporarily relinquishing the lead to Perez for six laps, as chants of “Checo” erupt throughout the stadium and grandstands along the roughly 2.6-mile circuit.

Inside the Silver Arrows Lounge on the Paddock Club’s second level, the action is broadcast on a massive display and smaller screens as analysts from Mercedes narrate and provide insights on the events as they unfold. All the while, uniformed wait staff deliver lobster tail, ravioli and sushi along with premium tequila and bubbly to tables already laden with bottles of Bordeaux.

But as compelling as the lounge proves to be, it’s no competition for the seats immediately outside during the final minutes, and the room nearly empties. From lap 40 on, Verstappen has again held the lead while No. 44 for Mercedes tries to not only reign him in, but keep the very real threat from Perez at bay. After 71 laps, however, Verstappen takes the checkered flag with ease and it becomes clear that the majority of those at the track are Red Bull zealots, especially after Perez takes the podium for third place, finishing just behind Hamilton.

With four more races to go, Mercedes has a mere one point lead overall in the 10-team standings while, on the drivers’ side, Verstappen extends his margin over Hamilton by 19 points. The next showdown is November 14 in Brazil and, regardless of the outcome, the Champagne will still be flowing in that venue’s Ritz-Carlton Silver Arrows Lounge well after it’s been sprayed by the winning racer.