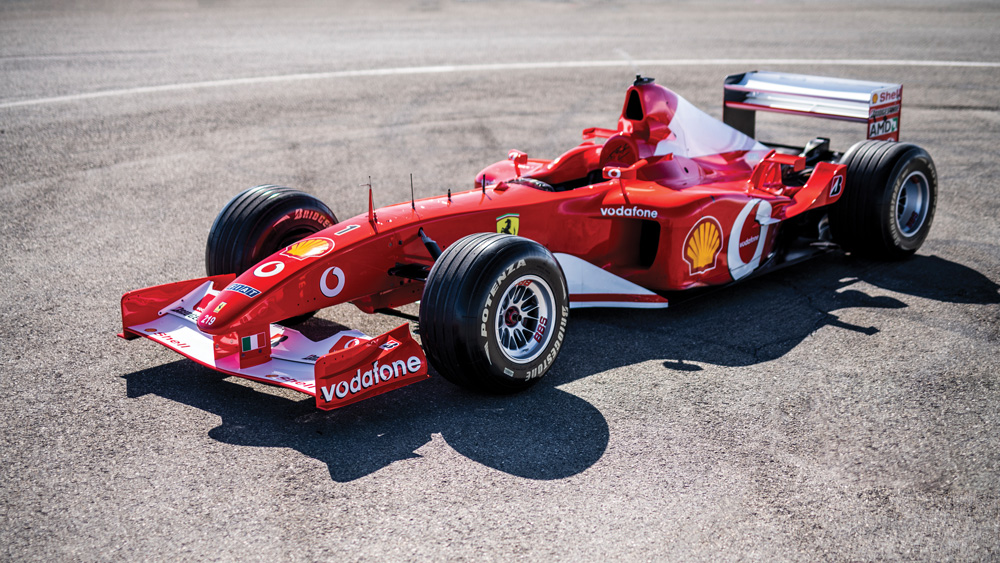 Motorsports enthusiasts will turn their attention to Abu Dhabi at the end of November, not only for the 2019 Formula 1 Etihad Airlines Abu Dhabi Grand Prix but also for a collector car auction full of blue-chip racing machines. Held on November 30 at the Yas Marina Circuit, RM Sotheby’s first auction in the Middle East—produced in collaboration with Formula 1—will feature 40 high-performance vehicles, including one particular racer that became one of the most successful Formula 1 designs of all time.

The new owner will take delivery at Ferrari’s own Fiorano Circuit.  Photo by Remi Dargegen, courtesy of RM Sotheby's.

The auction’s undisputed star attraction, a Ferrari F2002, is estimated to sell for as much as $7.5 million, which would set a new house record for a Ferrari F1 race car of that era by almost $6 million. The reason for its elevated value?  Michael Schumacher drove it to victory three times during the 2002 season, helping him to secure his fifth world championship (a portion of the winning bid will also support Schumacher’s Keep Fighting Foundation). Today, the car is Ferrari Classiche Certified and race prepared for Ferrari Corse Clienti events. It will be delivered to its new owner at Fiorano Circuit, Ferrari’s private R&D racetrack, following a comprehensive engine and transmission rebuild. To promote the car’s upcoming sale, Michael Schumacher’s son Mick recently drove the car at Fiorano.

Three years after Schumacher claimed his fifth world title, Maserati won the Manufacturer’s Cup behind the performance of the MC12 Corsa, an extraordinary racing machine built upon the platform that Ferrari used to create the Enzo. With a massive rear spoiler and a removable hardtop, the street-legal iteration of Maserati’s race car actually created more downforce than Ferrari’s supercar. Maserati built only 50 examples of the MC12 in 2005, and the example that will cross the block in Abu Dhabi has been driven only about 1,200 miles since new. It’s expected to sell for at least $2.6 million.

The 2005 Maserati MC12 set to cross the block.  Photo by Kimio Ng, courtesy of RM Sotheby's.

In 2009, Mercedes-Benz unveiled a limited-edition, lightweight speedster variant of its SLR, one that was designed as a contemporary ode to the 300 SLR that Stirling Moss drove to victory at the 1955 Mille Miglia. Although it is a contemporary build, the 2010 Mercedes-Benz SLR Stirling Moss doesn’t deliver many creature comforts that drivers typically seek out in a luxurious, high-performance street car. Instead, the vehicle was built with similar intentions to those that inspired the original 300 SLR’s creation more than six decades ago.

Powered by a supercharged AMG V-8 that churns out 641 hp, the rare Mercedes-McLaren street legal collaboration can sprint from zero to 62 mph in 3.5 seconds. As one automotive publication described in 2009, driving the car at full acceleration is like “standing on the wingtip of a 747.” Only 75 examples were built, and the one that will cross the block in Abu Dhabi has accrued slightly more than 300 miles of road time. It could sell for as much as $2.7 million.

When McLaren launched its P1 GTR at the Geneva Motor Show in early 2015, it did so to commemorate the 20th anniversary of McLaren F1’s victory at Le Mans. Only 58 examples were built, offered exclusively to existing P1 owners; but the difference in performance between a standard P1 and the GTR is massive, so much so that the GTR recorded lap times at Losail International Circuit that were seven seconds faster.

The 2016 McLaren P1 GTR to be presented by RM Sotheby’s.  Photo by Tim Scott, courtesy of RM Sotheby's.

It should be noted that the P1 GTR is not street legal, and the example to be sold through RM Sotheby’s has not yet seen the track. It remains in fresh-from-the-factory condition, with only delivery mileage on its odometer. For those reasons—and because it’s a revered and rare supercar—this P1 GTR could sell for as much as $2.4 million.