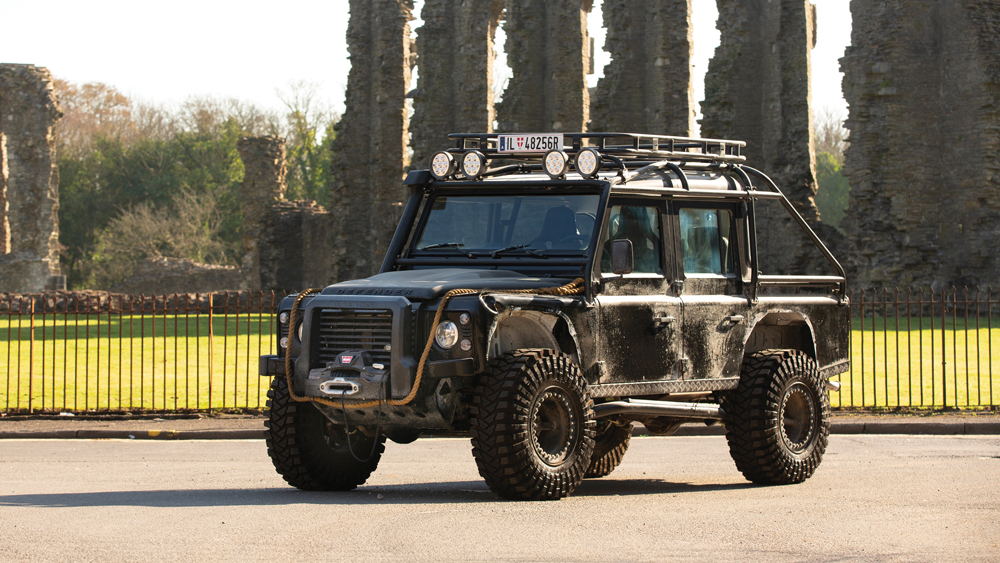 Since 1962, Hollywood has artfully—at times—churned out more than two dozen James Bond films; and over those 57 years, a slew of Hollywood directors has relied on one tried and true film-making formula for the franchise: beautiful women + equally beautiful cars + exotic locales + cool gadgets + leading-man swagger + big-budget action scenes = success.

Say what you will about Spectre, the most recent installment in the franchise—which many have criticized for having a predictable, surface-level narrative—but it faithfully adheres to the aforementioned formula. Serving up generous portions of action-packed spectacle, the 2015 blockbuster features a chase scene filmed in the Austrian Alps—allegedly the most expensive stunt scene filmed in Hollywood history—during which Bond, in a vintage airplane, chases a small caravan of Land Rover Defenders down tree-lined, snow-covered mountain passes.

Needing a collection of antagonist-driven vehicles that looked both aggressive and sinister, the film’s production team partnered with Bowler, a firm that specializes in the construction of aftermarket Defenders for off-road motorsport and defense clients (including the British government). The SVX Concept (or Spectre Defender) born from that partnership features 37-inch tires, a heavy-duty roll cage, and a toughened suspension (with rose joints and Bilstein rally dampers). Only three ‘halo’ cars were built with quality finishes to support close-up shots in the film.

One of those halo Defenders, equipped with a special hydraulic system that ensured the SUV flipped at the moment it collided with the Bond-piloted airplane, crossed the RM Sotheby’s auction block during the company’s recent, inaugural auction in Essen, Germany. It sold for 115,000 euros (about $130,000).

“The car we are offering is so much more than a simple movie prop,” said Gord Duff, the global head of auctions at RM Sotheby’s, prior to the sale. Duff was referencing Bowler’s significant efforts to transform the Santorini Black, crew-cab 110 Defenders into menacing-looking vehicles fit for a James Bond villain and his henchmen. “This was not a case of simply putting on a few cosmetic enhancements for the purposes of filming, explained Duff. “They [the 10, purpose-built Defenders] are highly developed and engineered vehicles, bespoke builds by Land Rover’s special vehicles division.”

The SVX Concept sold with only 16 miles on its odometer.  Photo by Tom Gidden, courtesy of RM Sotheby's.

This particular stunt vehicle flipped on cue, but the action scene left its chassis bent, which renders it unsuitable for road use today. Still, the otherwise fully functional vehicle, with only 16 miles on its odometer, sold for six figures, which doesn’t at all surprise Duff. “It’s a piece of 007 history,” he exclaims, “and it’s more affordable than an Aston!”