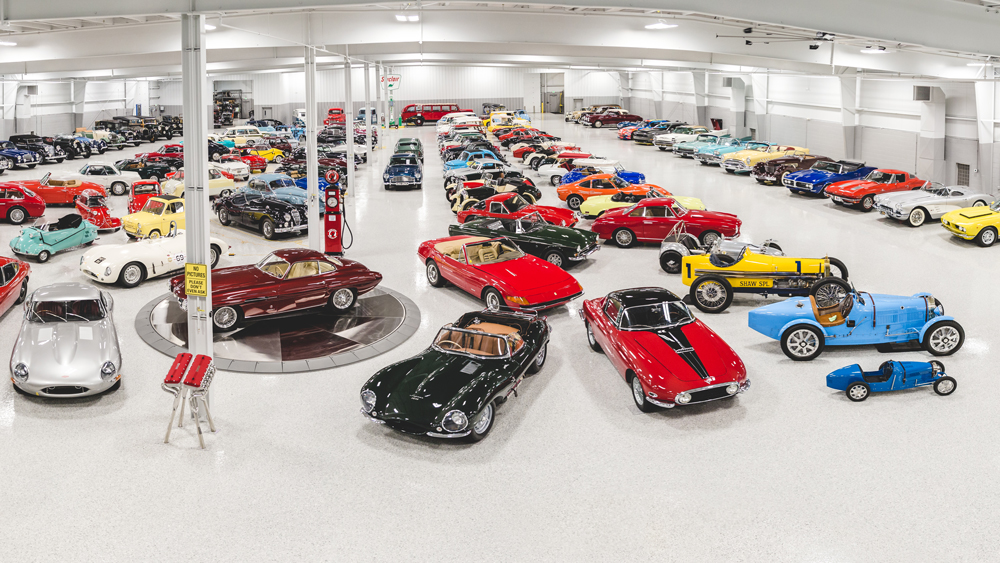 When RM Sotheby’s rolls into northernmost Indiana for its Elkhart Collection auction on October 23, the company will offer more than 230 lots for sale, all of which will be presented with no reserve. Despite that fact, this auction doesn’t represent a shift in how RM Sotheby’s will tailor its events in the future. Instead, it continues a two-decades-long pattern of how RM Sotheby’s has approached on-site sales of private collections.

According to Alain Squindo, chief operating officer at RM Sotheby’s, the no-reserve parameters work well in such a setting because the monumental nature of the sale attracts the attention of the car-collecting community’s most notable buyers. As Squindo acknowledges, it may be the only time that some of the vehicles within a collection are sold publicly, so prospective bidders make it a priority to attend. “In the right settings and the right circumstances, a no-reserve offering is intelligent,” Squindo says. “Historically, it’s the cauldron through which bidding wars are forged. It works really well with private-collection sales, and we’ve set a lot of records because of that.”

Cars from the Elkhart Collection will be auctioned by RM Sotheby’s on October 23.  Photo: Courtesy of RM Sotheby's.

During this single-collection sale, RM Sotheby’s will present a 1953 Fiat 8V Supersonic by Ghia, a car that was originally delivered to heralded GM designer Henry S. Lauve. Exceedingly rare, the vehicle is one of only 15 examples that feature Ghia’s Supersonic bodies for the Fiat 8V chassis.

This was a car that championed a design movement during the Jet Age, when automobiles adopted a distinct, aeronautical aesthetic. “The Supersonic is an icon of design; it’s instantly recognizable, and this one is superb,” says Squindo. “We haven’t offered many of these in our history, and here’s one with a show-quality restoration—and it’s being offered without reserve. It’s a true concours car in every sense of the word.”

Four decades after Ghia fashioned its Supersonic, Jaguar built the XJ220, a fighter jet–inspired supercar all its own, and one that, for a time, was the world’s fastest production automobile. According to Squindo, the 1993 Jaguar XJ220 that will cross the block is a “great example of the breed,” since it’s in excellent condition and has been driven fewer than 4,300 miles since new. “It’s the perfect storm for a supercar,” he says. “Low mileage, good condition, no excuses and it’s selling without reserve, which doesn’t happen every day.”

One of nine examples ever built of Alfa Romeo’s TZ3 Stradale Zagato.  Photo by Darin Schnabel ©2019, courtesy of RM Sotheby's.

Speaking of things that don’t happen every day, RM Sotheby’s will also offer up for sale a 2010 Alfa Romeo TZ3 Stradale Zagato. Powered by a Viper V-10 engine, the limited-edition Italian supercar represents—as Squindo sees it—an unrepeatable opportunity. After all, only nine of them were built. “There are amazing examples [of collector cars] every place you look, but this car stops you in your tracks,” he says. “It’s an iconic design and something you’d recognize right away. As simplistic as the phrase sounds, you’d be hard pressed to find another tomorrow.”

Somewhat easier to find are examples of the Mercedes-Benz 300 SL, like the 1955 300 SL Gullwing on the docket. But to find one offered without a reserve? That’s a rarity. “It’s a great restored example in a great color combination, silver over red,” Squindo says of the Benz. “If there’s a better blue-chip car, I don’t know what it would be. This car is representative of how diverse this collection is. There quite literally isn’t a category that hasn’t been touched; there’s something for every taste.”