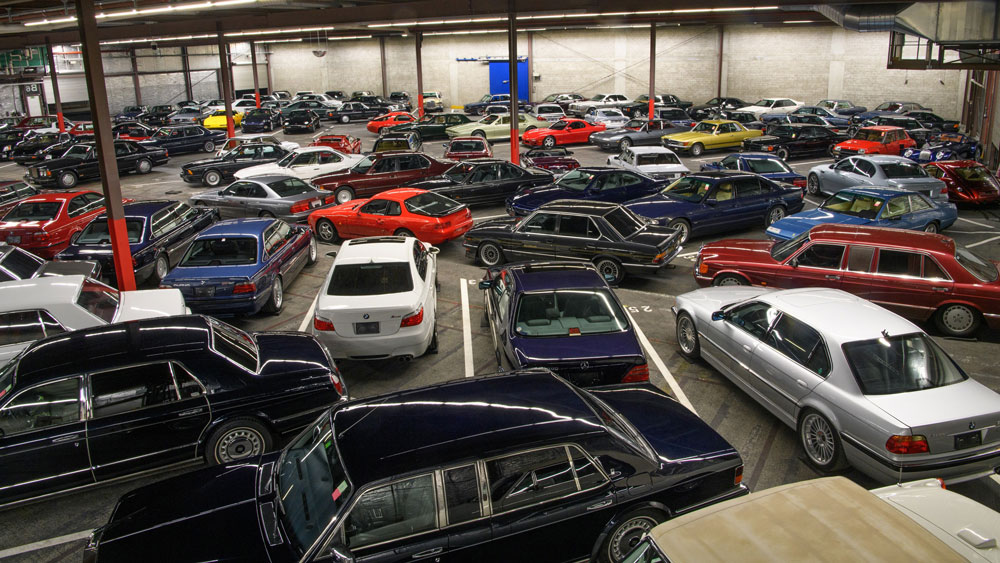 One man’s obsession with the cars of his youth has spawned one of the biggest auctions ever of modern-day classics. RM Sotheby’s will sell 140 vehicles from what is dubbed the “Youngtimer” collection—for its focus on truly special 1980s and 1990s sports cars—via four big events in 2019, beginning in Paris on February 9 and concluding in Essen, Germany, on April 11.

Among the highlights are cars that need little introduction, from a gaggle of BMW Alpina coupes to early AMG-treated Mercedes wagons. “I’ve really never seen anything like it,” says RM Sotheby’s Gord Duff. He’s not just talking about the fact that a successful European car enthusiast suddenly decided to buy hundreds of his favorite childhood dream cars (yes, he will still have quite a few left), but also that all of these cars are housed in a special warehouse with dedicated battery tenders and are dusted and started regularly.

“We’re bringing well-cared-for cars to auction that a lot of people can afford when compared to seven-figure Ferraris,” says Duff. “In the past five years, people have started to pay a lot more attention to vehicles from this era. It will be interesting to see where the bidders come from globally for this event, because that gives you a sense of who is starting to focus on the modern collectible.”

Here are a few of Duff’s highlights from the four Youngtimer auctions.

1994 BMW Alpina B12 ($198,000 to $255,000): BMW has rewritten its design language for an electric future with its new i8 coupe, but there’s something about the company’s 8-Series two-door that can still stop hearts. Alpina took the already monstrous V-12 that is stuffed into the standard version and bored out the engine for more horsepower (416 hp). Alpina also put its signature touches on the interior, including yards of blue-and-green stitching. “With only 40,000 kilometers, this is one of the most original examples we’ve seen in some time,” says Duff.

1989 Mercedes-Benz 500 SEC AMG 6.0 Wide Body Coupe (approximately $170,000 to $227,000): Once again, the comparatively low mileage of this decades-old autobahn charger (around 16,700 miles are on the clock) stands out, as does “it being a factory wide-body that has not been modified,” says Duff. “It’s a unicorn of sorts.” Featuring an AMG-built quad-cam, this 385 hp, 6-liter machine boasted a massive $200,000 price tag in its day. One of the truly iconic Star-badged mega-coupes ever to emerge from Affalterbach.

1994 Toyota Supra ($100,000 to $120,000): “If there is a car poised to rise in the estimation of collectors of modern Japanese sports cars, the Supra is right there, maybe only behind the Acura NSX,” says Duff on this low-mileage (11,000 miles) black-on-black Toyota that, in period, represented that company’s most muscle-bound model. What makes it especially desirable is simply its pristine state, given that cars of its ilk often were modified and driven hard.

1991 Nissan 300ZX Twin Turbo ($30,000 to $40,000): There is probably no cheaper way to reel in the years than bidding on this Nissan coupe. “You won’t find one of these with fewer mileage for one,” Duff says of the 24,000-mile black beauty. The 300ZX coupe showed up on U.S. shores when European rivals cost many multiples more, and for your dollars you got a sculpted design whose elegant minimalism still charms today.

2002 Bentley Continental R Le Mans Series ($120,000 to $140,000): “These cars have a following, and this particular model (one of 46 built) was first sold in the U.S. so it’s great to bring it back home,” says Duff of the massive yet stately coupe. This limited-production performance notchback added distinctive touches to Bentley’s 6.75-liter turbo V-8 Continental R, including special interior trim and race-inspired exterior accents.

1982 Alpina B7 Turbo (approximately $102,000 to $113,000): There are arguably few more elegant BMWs than the shark-nose 6-series (OK, maybe the timeless 507 would bump it), so the Alpina version of that coupe is a truly special machine indeed. This particular example sports a classic white exterior along with tasteful Alpina badging and script, and has traveled only a little over 34,000 miles over the past 36 years.

1979 Mercedes-Benz 500 TE AMG wagon (roughly $68,000 to $79,000): “Think of this car as the Cadillac CTS-V of today,” says Duff. “Europe doesn’t really do SUVs, they do powerful wagons and this Mercedes started the trend, from its blacked-out look to hot-rod stance.” This wickedly fast family mover has racked up 118,000 miles but, given the marque’s build quality, likely has years to travel before it rests. You’ll stand out in a neighborhood of modern AMG wagons with this retro-beast.