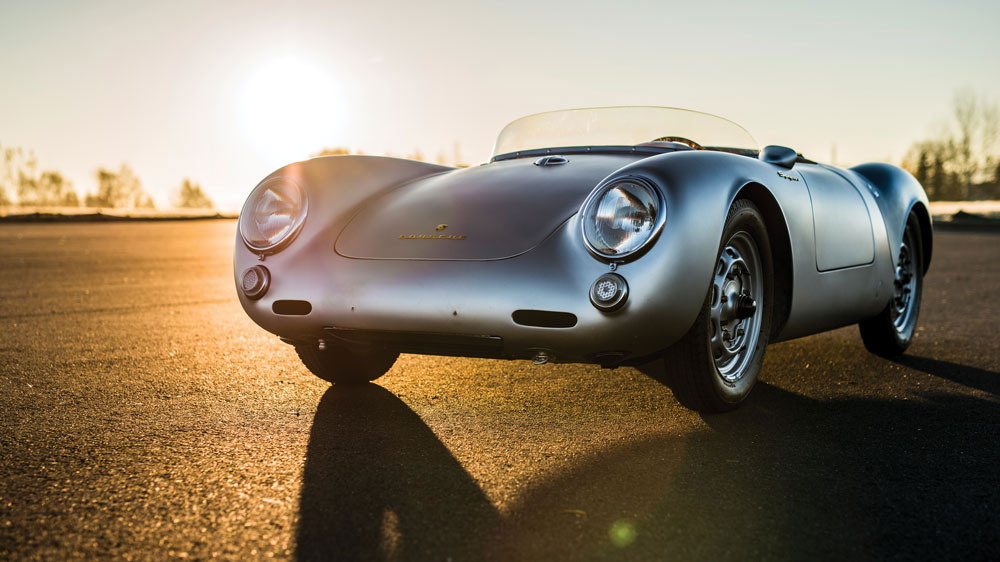 An open-top, classic car is different than all others. That doesn’t mean it’s better than any other set of coveted wheels. It’s just different. Some collectors might tell you that an open cockpit on a vintage automobile allows you to better enjoy the world around you while you’re driving—that an enclosed grand tourer from the 1940s, ’50s, or ’60s is, in some ways, restrictive and uncomfortable. But at the end of the day, it all comes down to personal preferences.

Based upon their sales at RM Sotheby’s recent Paris auction, the following three collector cars from the mid-20th century prove that plenty of prospective bidders in the audience shared a penchant for classic convertibles. So much so, in fact, that each of these vehicles flirted with—or eclipsed—fetching seven figures.

“Porsche” and “spyder.” They are two words that just seem meant for each other. Porsche’s contemporary 918 Spyder has grabbed much of the spotlight recently, but the 550 RS is the original. It’s the model that sparked more than six decades of Porsche designing sexy and lightning-quick, open-air sports cars. Crossing the block for about $3.4 million, this 1956 Porsche 550 RS Spyder by Wendler is equipped with a series-correct engine and transmission and comes with as much period documentation as any 550 Spyder ever previously seen or offered for sale. Best of all, the car boasts an extensive racing history, including participation in the 1957 24 Hours of Le Mans, which makes it one of only 10 such 550 Spyders to ever enter the revered endurance race.

“Opportunities to buy important cars with significant period race history are relatively rare,” said Paul Darvill, a car specialist with RM Sotheby’s, prior to the auction. “If I was a Belgian car collector I would be particularly keen to own this 550 because of its history with Ecurie Nationale Belge [racing team].”

Leveraging the success of its 300 SL Gullwing, Mercedes-Benz debuted a prototype of a convertible iteration during the summer of 1956. Outfitted with a new suspension system that produced a more comfortable ride and improved the car’s handling, the 300 SL roadster could still reach a top speed of 137 mph, a notable achievement given the extra weight that it was forced to carry, thanks to the mechanisms needed for a convertible roof.

The recipient of a 3,800-hour restoration.  Photo by Tim Scott, courtesy of RM Sotheby's.

The 1957 Mercedes-Benz 300 SL Roadster that sold in Paris for slightly more than $1 million has been properly exercised, but also well cared for over the course of its life, and it received a 3,800-hour restoration during the mid-2000s. Most 300 SL Roadsters are either beautifully restored or conditioned for high-performance touring, but this desirable example checks both of those boxes. It also boasts its original engine, gearbox, and differential, but Darvill acknowledges that such a feature is less of a selling point than it would be for other models. “Unlike a Porsche 356, where matching cars are rare because replacement engines were cheap in [that] period, the engine of a 300 SL is more complex and therefore it was worth repairing rather than replacing,” he explains. “It’s nice to have a fully matching car, but it’s not exceptionally rare.”

Shelby 427 Cobras are not the white whales of classic car collecting in the way that a Ferrari 250 GTO might be. In fact, RM Sotheby’s has sold almost 20 of them over the past decade. What makes the 1966 Shelby 427 Cobra that sold through RM Sotheby’s—for roughly $878,000—unique is its ownership history, specifically an almost 20-year period where the car sat on display at the Midland Motor Museum in England.

This example was at the Midland Motor Museum for nearly 20 years.  Photo: Courtesy of RM Sotheby's.

“The vast majority of Cobras have had lives which are much more complicated than this particular car,” says Darvill. “This car stands out because of its clean history, free from accidents and modification. It has lived a sheltered life. The interior patina on this car is absolutely beautiful, too. I wouldn’t touch a thing.”