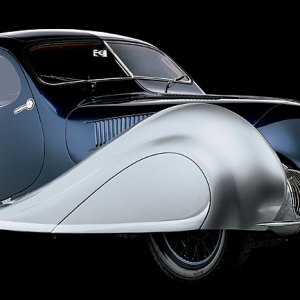 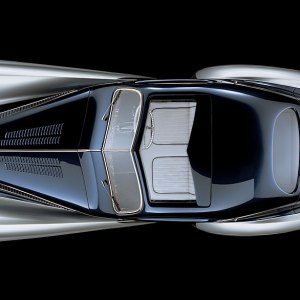 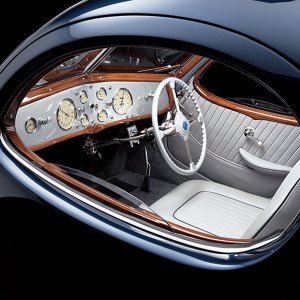 Parisian fashion houses produce couture the same way that Giuseppe Figoni, the artist behind the Figoni & Falaschi coachbuilding partnership, once designed cars. In 1937, Figoni created a unique body for a Talbot-Lago T150-C-SS. Chassis number 90107, clad in aluminum, is the only known Talbot-Lago to feature four teardrop-shaped enveloppantes—Figoni’s term for fully skirted fenders. Among the coupe’s many characteristics were a sunroof, painted wheels, and a crown-shaped cloisonné hood ornament. Paramjit Singh, a maharaja from the Indian district of Kapurthala, commissioned the car as a wedding gift for his fourth wife, whom he had met in Paris some 15 years earlier. At the time, the future maharani of Kapurthala—born Stella Mudge in Kent, England—was an exotic dancer at the infamous Folies Bergère. After attaining royal status, the princess often had the car repainted and reupholstered to match her gowns, which thankfully did not include sequins or feathers.