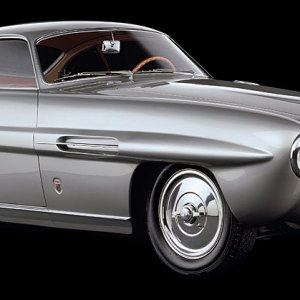 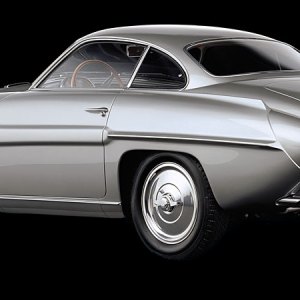 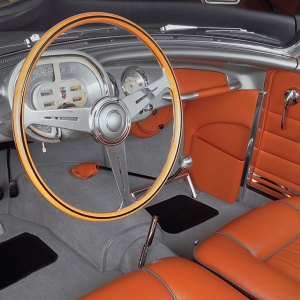 Fiat named its first (and last) eight-cylinder automobile the 8V because the Italian car manufacturer incorrectly assumed that Ford had trademarked “V8” as a model designation. The Otto Vu raced successfully against its 2-liter contemporaries, but Fiat built just 114 of the engine/chassis combos between 1952 and 1954 before discontinuing the line. Several coachbuilders constructed bodies for the 8V, the finest example of which is the Supersonic by Ghia. The Turin, Italy–based carrozzeria’s chief designer, Giovanni Savonuzzi, was an aeronautical engineer by training, and his background is evident in the Supersonic’s gaping air intake, stabilizing fins, and afterburner-shaped taillights. Altogether, Ghia built 13 nearly identical Supersonic bodies, which the company draped over the chassis of eight Fiat 8Vs, three Jaguar XK120s, an Alfa Romeo 1900, and an Aston Martin DB2/4 Mark II.