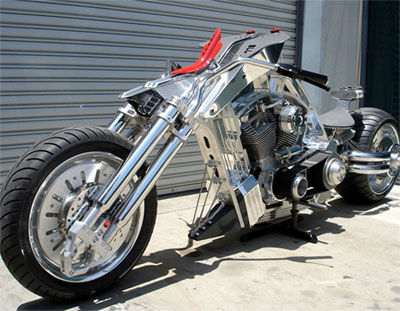 The rapture’s menacing appearance is no accident: Paul Yang and Larry Nagel of Dreamcraft Studios wanted to evoke a futuristic war machine with this prototype bike, which they debuted at the Los Angeles Calendar Motorcycle Show last summer. Intended to intimidate everything on the road—passenger cars included—the bike features such stylistic elements as winglike gas tanks mounted between the handlebars to accentuate its aggressive presence.

Yang and Nagel required eight months to produce the Rapture, which is the follow-up to their Ontario, Calif., company’s DCS-001 Saga concept bike. The build process involved machining a one-piece, 200-pound billet frame from a 900-pound block of T6 aircraft-grade aluminum. Engineering highlights include a quad-fork front end and an exhaust system that channels spent gases through eight semicircular vents in the rear swing arm. Powering the 780-pound behemoth is a Harley-Davidson Screaming Eagle 103 engine.